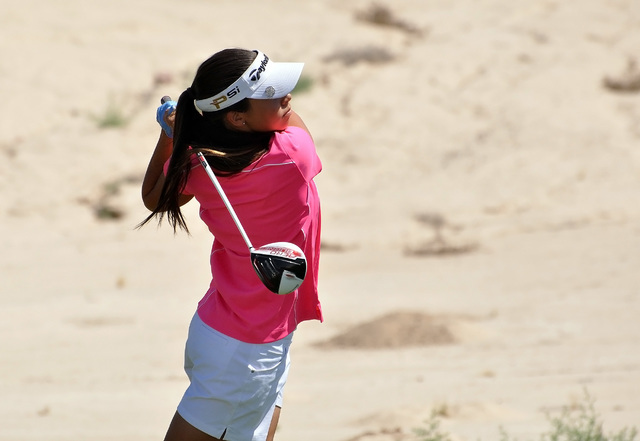 There is a new golfer in the valley making waves the same way one-time state champion Austen Ancell did prior to coming to the high school.

Breanne Nygaard will be an eighth grader at Rosemary Clarke Middle School this year.

She has one more year before she starts golfing for the Trojans, and she is already carding in the 80s.

Nygaard has been a consistent attender of the junior golf tournaments during the summer and, according to Frank Cox she has also has success in various tourneys in Las Vegas this summer.

She does really well at the tournaments she has entered in Las Vegas, said Cox, director of golf for the Pahrump Junior Golf Association. She works at it and she is willing to work hard on the things she needs to improve and is one of the harder-working golfers out there.

Nygaard said she has been golfing for four years and loves the sport.

My dad golfs and he let us try it and I now love it, Nygaard said. I liked it because every course is different.

Over the summer Nygaard has entered six US Kids Golf tourneys in the Las Vegas area, where she has finished either first or second place.

Then on July 2 she took first at the the Southern Nevada Junior Amateur tourney at Boulder Creek. She carded a 172 for the two-day tournament, which was a tie and then beat out Logan Allen in three-round play off for the overall win.

These summer tournaments have improved her golf skills.

During the summer I have been working on improving my short game, she said. I three putt more than I want to.

The summer has given Nygaard a lot of tournament challenges and confidence. At the moment, she feels she is ready for high school golf.

I think I am ready for high school because I golf a lot with the high school girls and I feel I can hold my own with them, she said.

Her father, Steve Nygaard, Trojans boys assistant golf coach, said he was proud of her accomplishments but he also was cautious of what this early success meant. He said she works hard and the game helps build her character and he is glad she enjoys the game.

I think she is a good golfer, he said. But she has yet to test herself against some of the better high school girl golfers.