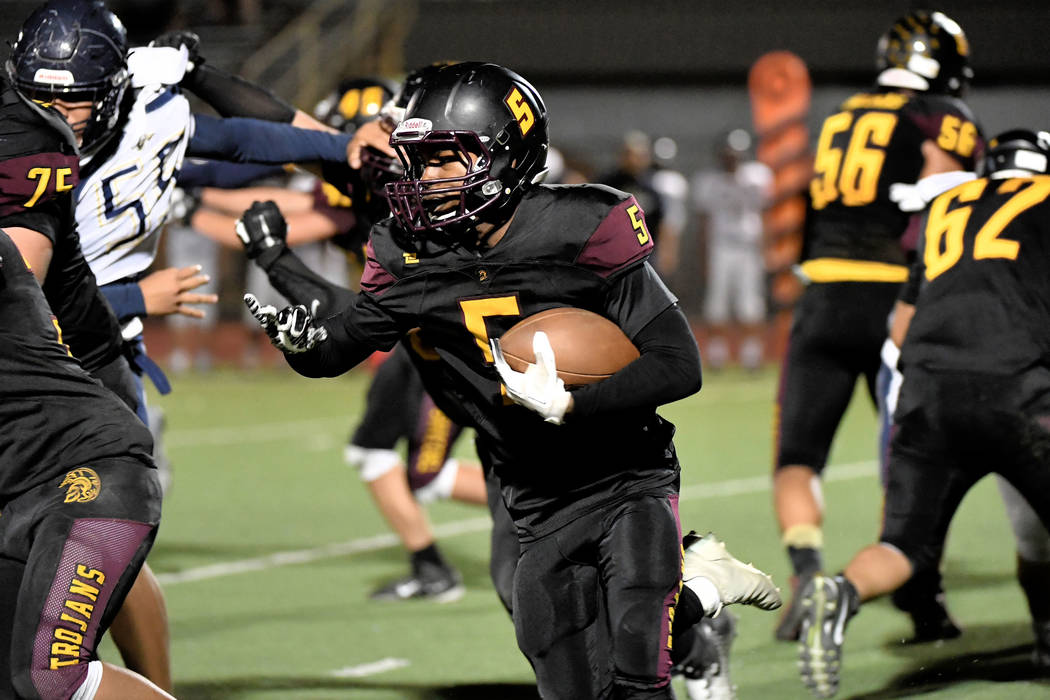 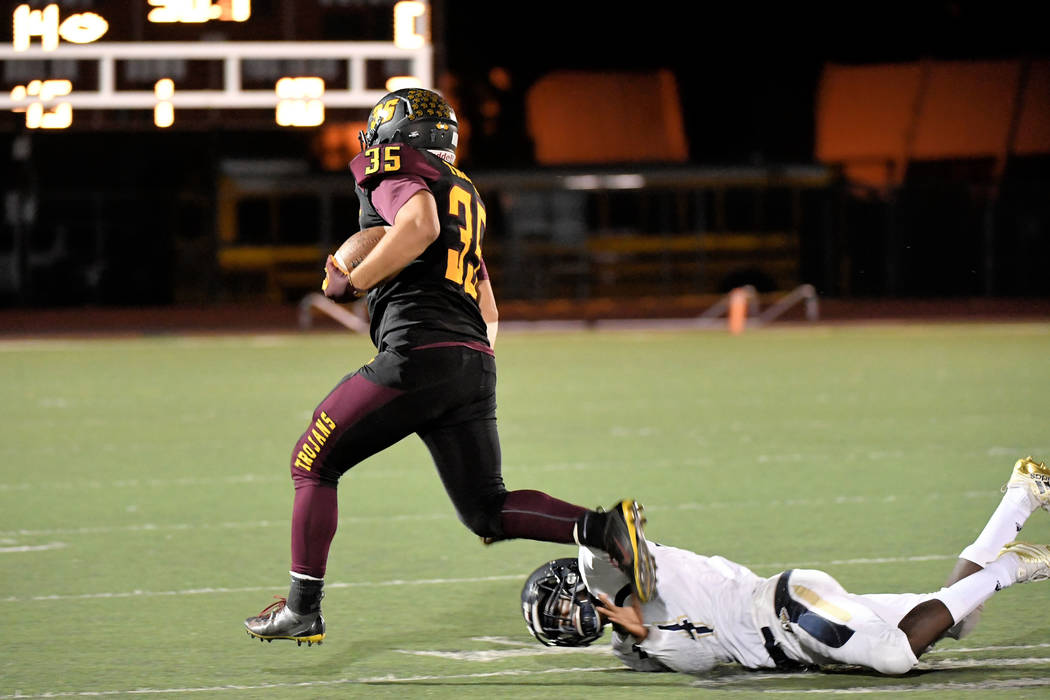 Peter Davis/Special to the Pahrump Valley Times Nico Velazquez breaks free for some of his 104 rushing yards as three Pahrump Valley backs reached 100 yards in the Trojans' 38-12 rout of Cheyenne on Friday night in Pahrump. 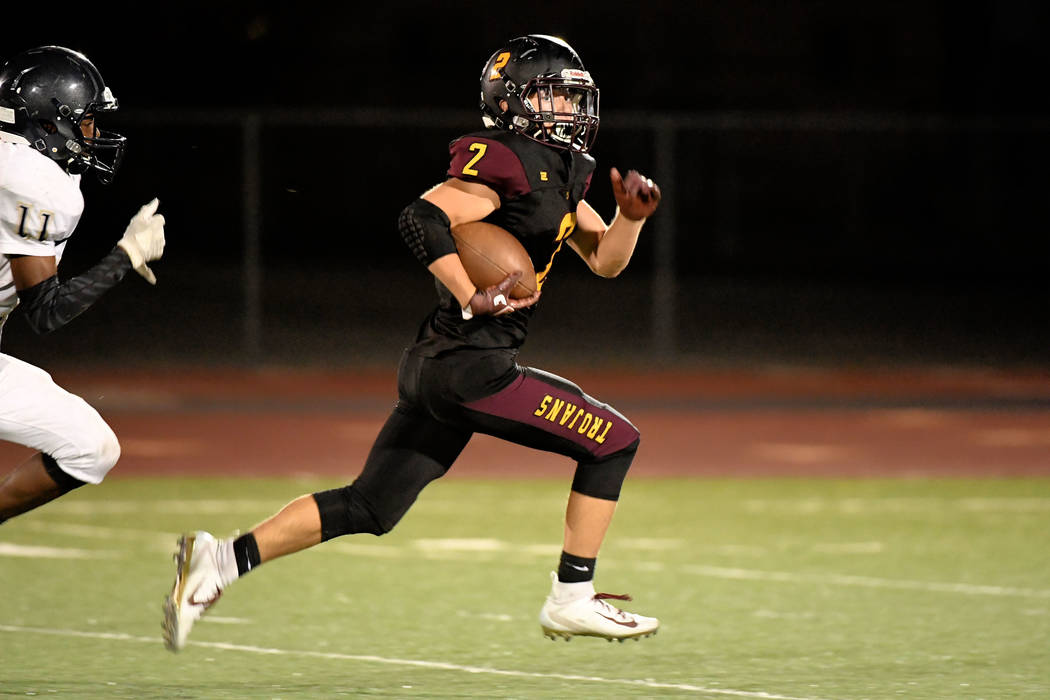 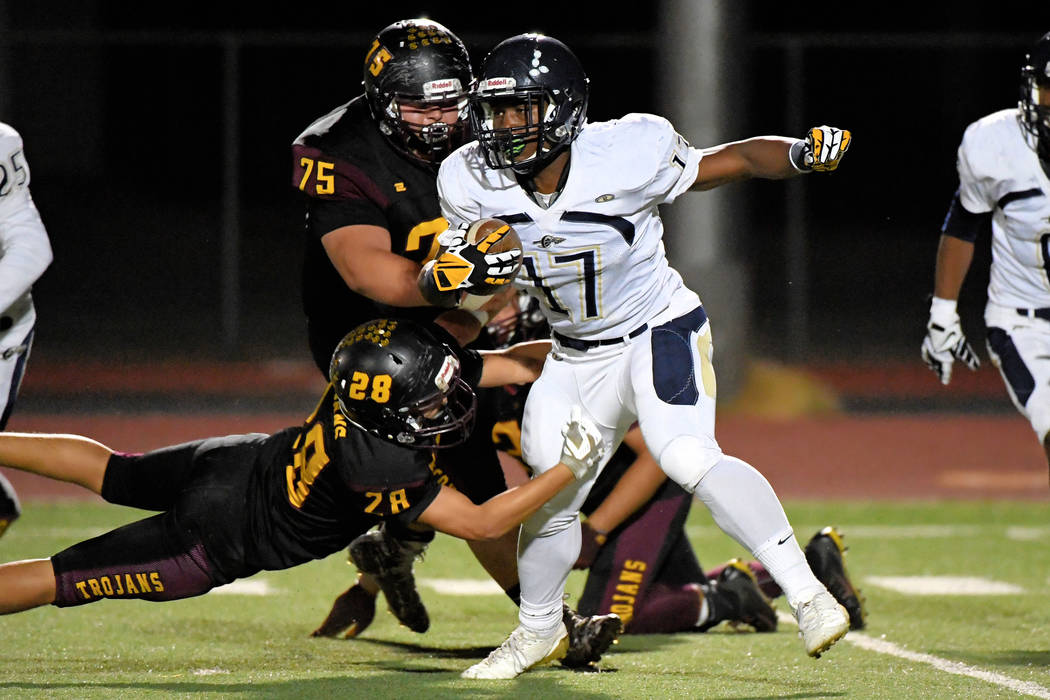 Nobody saw this coming.

Anyone who knows the Pahrump Valley High School football team’s style of play knows the Trojans have a chance in almost any game, but this was something else entirely, and nobody anticipated it.

Not the people whose job it is to cover high school sports in Southern Nevada, not anybody who compared the teams’ game-by-game results, not even Trojans coach Joe Clayton.

“This” was a dominating, convincing performance, the kind of old-fashioned butt-kicking usually only administered by great teams or against poor teams, and it came at the best possible time for Pahrump Valley.

The win leaves the Trojans as the only undefeated team in the Sunset after just two weeks of league play.

“We talked to them all week about how important this game was,” Clayton said. “It was that much more important to see that they took it seriously and they wanted to win this game tonight, and it showed from start to finish.

“I was a little surprised at how undisciplined they were, being a 5-1 team. To see us come out and put 38 up on them, and take it right at them, I was actually a little shocked by that.”

Nobody was more shocked than the Desert Shields, who showed little of the offensive prowess that built that 5-1 record. Quarterback Joshua Rose did throw for 164 yards and a 40-yard touchdown, but he turned over the ball on Cheyenne’s first and last possessions, and the running game was more or less nonexistent until the game was out of reach.

Pahrump Valley’s running game, on the other hand, was nothing short of magnificent. Flennory led the way with 126 yards on 18 carries, Velazquez had 21 rushes for 104 yards, and Koenig hit 100 yards and two touchdowns on just eight carries.

“We were very confident,” Velazquez said. “We think we’re the best team in our league, honestly. This is what we expect to do.”

“I think more than anything, we intimidated them,” Clayton said. “I think they weren’t expecting to come in here and see what they saw.”

Or maybe they just didn’t think it could be done against them. The Trojans racked up 361 yards rushing on 60 carries, and the one pass they completed was, at the time, a huge play: Quarterback Dylan Wright found his favorite target, Koenig, for a 20-yard score on a fourth-and-5 play with 24.3 seconds left in the first half.

That picture-perfect pass play capped a remarkable 14-play, 99-yard drive that took 6 minutes, 11 seconds off the clock and, aside from a 30-yard burst by Velazquez, was a series of relatively modest gains.

Wright then ran in the 2-point conversion to make it 22-0, and it appeared as if the Trojans would win going away. But the Desert Shields showed a brief flash of the team that opened 5-1. Junior Rayvion Brown returned the ensuing kickoff 20 yards to the Cheyenne 36. With just 17 seconds left in the half, Rose then hit Tayjon Bullock for 24 yards before finding Brown deep down the left sideline for a 40-yard touchdown.

With 1.1 seconds left before halftime, the shutout, and presumably the momentum, was gone.

But in a game in which the only thing more startling than the Trojans’ offense was the Desert Shields’ lack of discipline, it just didn’t matter. After reaching the Pahrump Valley 45 on one play, penalties for offensive pass interference, intentional grounding and a false start created a second-and-50 for Cheyenne. Penalties staggered the Desert Shields all night; they drew 13 of them for 115 yards, a number that would have been worse if not for some being deep enough to warrant half-the-distance-to-the-goal-line markoffs.

Cheyenne ended up punting, and the Trojans followed that with a 78-yard drive that ate up another six minutes, featuring a 30-yard run by Flennory after he broke away from a defender clutching his jersey. When Koenig ran it in from 4 yards out, instead of Cheyenne possibly narrowing the gap further it was 30-6 Trojans.

You could have turned your sets off right there.

As if to send the Desert Shields off with one last reminder of what they were up against, the Trojans ran off the last 7:06 of the game, running 10 plays before Wright took a knee to mercifully end it.

“The line blocked tremendously, again,” Velazquez said. “We had the offense just rolling, punching people in the mouth.”

“It was such a team effort,” Clayton said. “One of the things we were concerned about was their quick pitches to the outside, but our linebackers played really well, too. At every level defensively, it was a good, solid team effort.”

And that will put a smile on a coach’s face every time.

“This is the happiest I’ve been in a while,” Clayton said. “This is one of the biggest wins we’ve had. We’ve had a couple others, but this is up there. For a team to come in 5-1, everybody’s anticipating they’re going to be the number-one team in our league, and to knock them off, we’re pretty happy.”