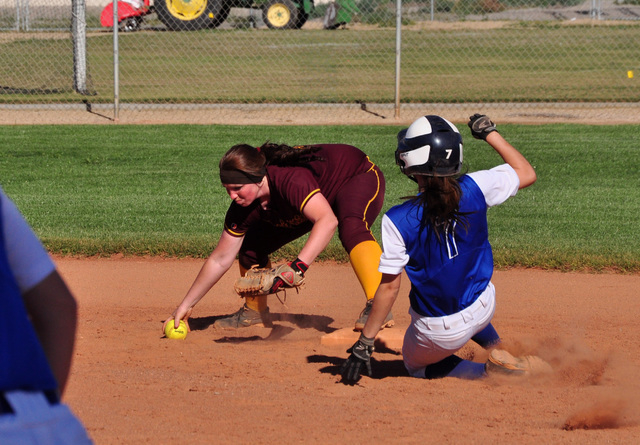 Sierra Vista came into Pahrump on Wednesday with some heat in the form of sophomore Kalei Watkins, their ace pitcher.

Watkins came in with a 55 mph-plus fast ball that smoked the Trojans hitters yesterday for 12 strikeouts and a 7-1 win.

The Trojans (9-5 overall, 2-2 Sunset League) never got anything going offensively against Sierra Vista’s (4-3, 4-0) Watkins, who probably is one of the best pitchers in the league.

The Trojans tried to mount an offensive in the first and the fourth where they sent five batters to the plate in each of those innings.

In the first, senior center fielder Madison Hurly got on base after getting hit by a pitch and then sophomore Jordan Egan ripped one to center. Watkins squashed the rally though with two strikeouts and made one batter fly out.

In the fourth, the girls again left two on when the freshman Amaya Mendoza was awarded first on an error and senior Amanda Pryor was hit by a pitch.

The call had the fans shouting loudly at the umpire for it appeared to the fans that Koenig was safe under the tag. Assistant Coach Jeff Koenig was even ejected from the game for his feelings on the call.

This was definitely the case for the girls in this contest.

The team had at least three unofficial errors during the game where the girls either missed easy pop flies or couldn’t come up with the ball on grounders.

Had the fielding been sharper the score may have been 4-1.