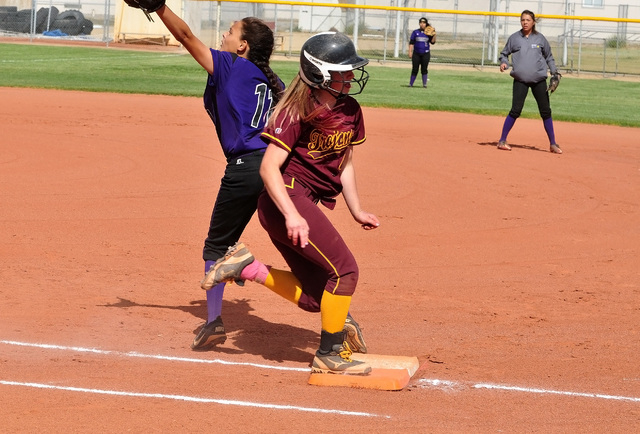 Trojans outfielder Kathy Niles drove in two runs with a bloop double in the eighth inning to get the win against Sunrise Mountain on Wednesday.

The Lady Trojans softball team (17-11) was in a must-win situation at the Division 1-A Southern Regional playoffs at Boulder City in the double elimination tournament and outlasted the Miners to win in the eighth 4-1.

Niles said prior to the hit that she was feeling down on herself and she was 0-2 that day.

“I have been having a rough time hitting lately,” Niles said. “I was upset and I wanted to get a hit badly.”

She said her hit was behind the first baseman in right field.

“It took awhile to sink in that I had drove in the runs and that we were winning,” she said.

Pahrump had to regroup after a 10-3 loss to the number one seeded Boulder City (26-8) team on Tuesday.

Trojans coach Ely Armendariz said he expected his team to do better.

“I was thinking mercy rule before the game started,” he said. “The last time we played these girls we had a lot of errors and I knew we could do better. Yesterday we just didn’t get timely hits. We would get people on base with two outs.”

He said Amaya Mendoza came through with a great game.

“I told her and Pearson (Jessica, the catcher) to focus on keeping the ball low and she did,” the coach said. “And they hit a lot of grounders.”

The Trojans faced Sierra Vista (22-6) on Thursday, which was past deadline and are looking for an upset. The Mountain Lions were the third seed team.

“We expect to stay closer than we have in the past,” Armendariz said.

His team lost to the Mountain Lions twice in the regular season, 13-3 and 5-1. The Sierra Vista team lost a close one to Spring Valley on Wednesday, 3-2.

Niles feels her team can take the Mountain Lions.

“We need to just have good hitting and no errors,” she said. “I feel we can beat them, but it will be rough.”