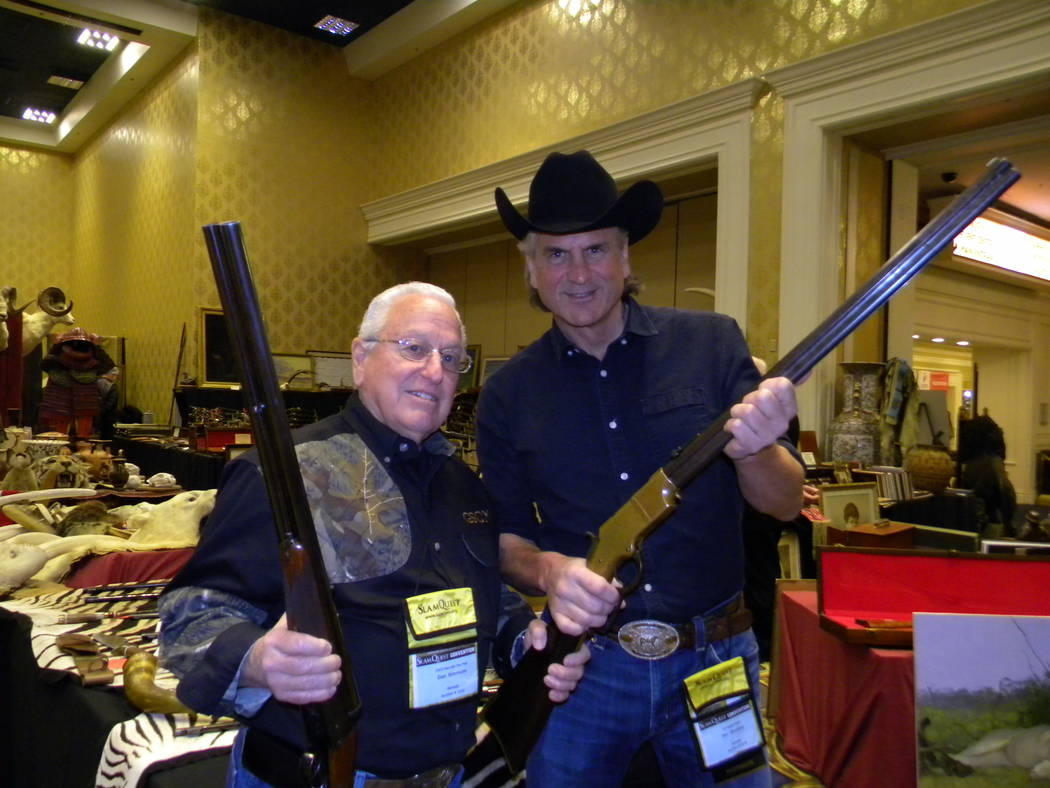 Dan Simmons/Special to the Pahrump Valley Times Columnist Dan Simmons (left) stands next to Jim Shockey, television producer and host of several hunting shows at a Las Vegas convention. Conventions such as the Shooting, Hunting and Outdoor Trade (SHOT) show at the end of January, and related venues, offer a chance to check out firearms and outdoor equipment. 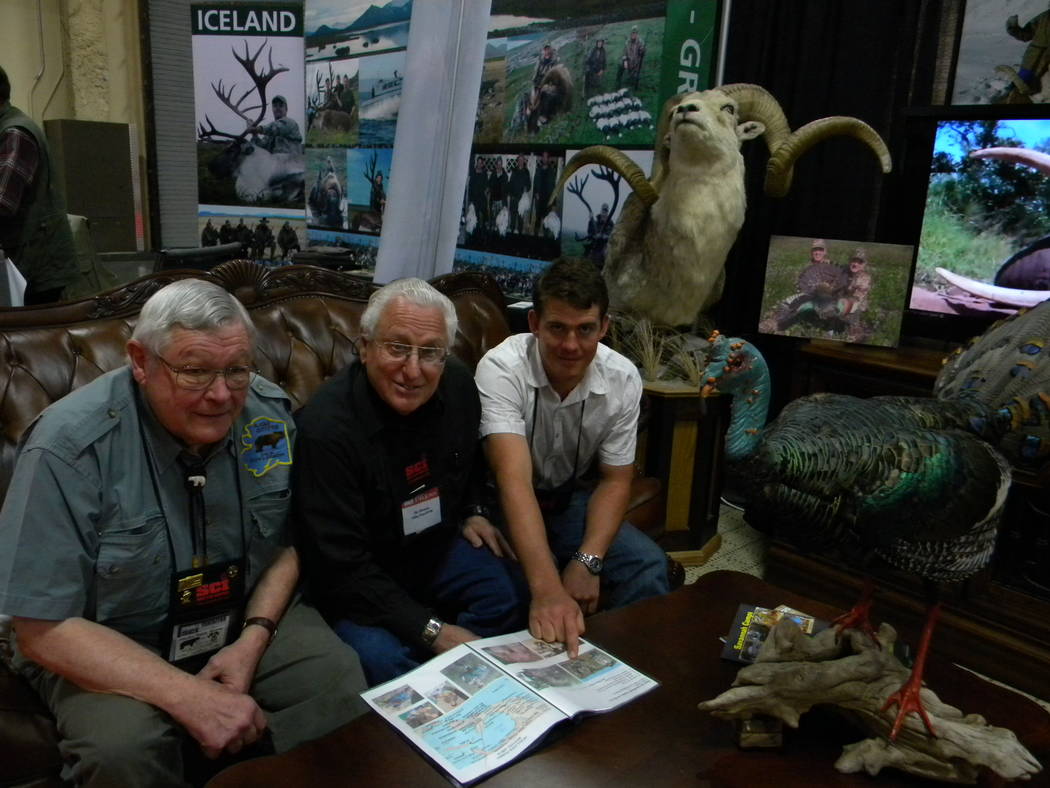 Nevada and Las Vegas, in particular, are known for their international conventions and lavish banquets.

Well, now is the prime convention season with the Shooting, Hunting and Outdoor Trade (SHOT) show about to start as well as the Safari Club International Convention, Grand Slam Club/Ovis Convention all occurring in Las Vegas and the Wild Sheep Foundation’s extraordinary convention in Reno.

The Las Vegas chapter of SCI is also having its banquet this month while Woods and Waters are having theirs in February.

It’s time to take some sick time from work or quit your job and join in on the greatest outdoor planning session on earth.

These shows offer the opportunity to see the latest in equipment, from firearms to tents and sleeping bags to outdoor vehicles with everything in-between. You will find everything you have been looking for as well as find things you “need,” but didn’t even know existed. Then there are the deals, better than any Black Friday or Cyber Monday.

If your interests include outdoor art these conventions are for you too. You may get to meet and see the latest works of Internationally famous outdoor artists like Kobus Moller, Grant Hacking, John Seerey-Lester, Trevor Swanson and Michael Sieve.

It’s also the perfect opportunity to explore travel and hunting/fishing venues from Nevada and around the world as hundreds or lodges, guides and outfitters will be available to show and tell of their unique opportunities.

But, my favorite part of these conventions is the opportunity to visit with like-minded friends, both old and new, sit and have a beverage and tell campfire stories. You will be able to meet and visit with outdoor legends like Jim Shockey, Craig Boddington, Chris Klineburger, Bob Markworth as well as historic guides like Dick Gunlogson, Fred Duckworth and many others.

“Dan, your “My Pal” canoe story in your Sportsman’s Quest book brought old memories cascading back to my mind.” Dick said. “I, too, have a canoe that is an old friend. It’s a 17-foot Alumacraft, circa 1956-57. With it I made many trips exploring Northern Canada and then headed for Alaska with the canoe riding on top of my pickup camper, of course.

On a later trip, I studied maps, dreamed all winter, and picked a route that began on the Churchill River, Manitoba, at the point where the railroad from Cranberry Portage to Lynn Lake makes its crossing. As you know full well picking a partner for an extended out-of-touch wilderness trip is the most critical part of making it a success. I was fortunate to have a friend join me who was from my hometown and with whom I had hunted, fished, and played sports in high school.

On the way north I arranged to meet an older gentleman in Winnipeg who was the Government supervisor in charge of commercial trap lines in the north. He had lived in the days of the fur trade traveling the waters and portages of the country we proposed to visit and was very helpful in making final selections for our route.

We drove a rough new road at 20 to 30 mph from The Pas to Cranberry Portage as they were building it.

At Cranberry Portage, we loaded all our gear into the baggage car of the train, parked our vehicle and rode the train north to the Churchill crossing where we disembarked. We made a short run upstream to an Indian village to visit a Hudson Bay post and then spent the night at the bridge as guests of an Icelander who was commercial fishing in nearby waters. The evening included a good tasting of the traditional Icelandic schnapps called Brennivin.

Heading down the river

The next morning we pushed off downriver to the east, eventually leaving the Churchill and crossed the first of numerous portages, one of which was four miles long. The maps were detailed and excellent showing every old route and accompanying portages, although the gentleman in Winnipeg had warned that we were likely one of the first non-natives to use many of them.

After traveling east we worked our way south, then, eventually, swung back west on a route that finally found us, in our trusty canoe, paddling back into Cranberry Portage and our patiently waiting ride home.

It was about a two-week voyage during which we saw one canoe with an Indian man and his young son aboard that slid by our camp on a small stream one evening. I’m not sure who was the more surprised when our paths crossed.

In those days, from the time we pushed off on the Churchill until we paddled into Cranberry Portage no one knew where we were, or our wellbeing – no sat phone, cell phone or GPS. All in all it was a glorious adventure.

The one tragedy of the above trip was that while tracking the canoe upriver late one afternoon we slipped on slippery rocks and lost control for a moment and that was enough for the canoe to broach and swamp. In the process my camera got wet and a nearly completed 36 exposure roll of film was totally lost. It had the guts of the trip on it.

My canoe made the trip to Alaska with me, but Alaska brought many new adventures and the toys that went with them – airplanes and commercial fishing boats to name a couple.

Both of these quickly became mainstays in my life and livelihood soon after arriving. I had become a pilot before leaving Minnesota. But, my canoe was often useful although used less and less as time went by. As I write, it rests upside down on my dock with a light covering of snow, patiently waiting for the lake to change back from ‘hard water’ to the ‘soft water’ of spring. It’s still as sound and sturdy as the day I bought it.”

Dick is a friend to this day and I look forward to a beverage and a few more stories to share this year.

While continuing my visits with old friends I ran into the former SCI Desert Chapter President Dave Small. He had just returned from a hunt in Spain with Alfonso Fabres’ outfit “Huntinspain” which he purchased at last year’s national convention.

He had been dreaming of this for 20 years, and this year it came together with a successful hunt for Red Stag, Mouflon Sheep, Fallow Deer and a Wild Boar. He calls this hunt the “Salamanca Special,” after the beautiful Renaissance city nearby.

Closer to home I ran into local Ben Arata, who recently returned from an Oregon hunt for deer, elk and bear. He told the story of “Three animals in four days.” You can expect to see these stories in coming columns.

If you’re able to attend the SCI convention or SCI Las Vegas chapter banquet make sure to meet and visit with the legendary Chris Klineburger, a pioneer conservationist who through his explorations opened the world to modern sports hunting while educating leaders on all the major continents of the value in saving natural habitats and big game species.

I have no doubt that without him and his compatriots we would not have the abundance of animals we enjoy today, especially the larger and more easily poached animals. He is our friend and fellow sportsman.

These are friends, and this is the season we meet and visit each year. Touching bases and perhaps even planning a hunt together is always a potential bonus. If you get the chance, visit with us at the upcoming conventions and banquets in Las Vegas; then we’ll toast to “Tight lines, straight shots and fair chase.”

If you have an adventure, a story or a comment, contact Sportsman’s Quest columnist Dan Simmons at sportsmansquest.dan@gmail.com