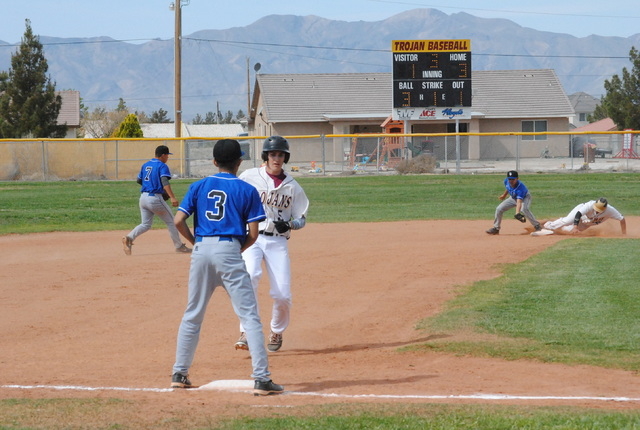 Trojans baseball racked up the hits in two games before Monday, but when they played Spring Valley yesterday the hits evaporated.

When you get 16 hits and 15 runs in two games, it means the hitting is going well for the team, but when that hitting evaporates in the next game it could mean a soft schedule. This is what Trojans Coach Brian Hayes feels.

“We have definitely played a soft schedule up to this point, but we have been pitching well and playing solid defense,” he said. “Our hitting is inconsistent as of this point. Clark was much improved and Desert Pines and Western were not much of a challenge.”

On Monday they traveled to Spring Valley (6-4 overall, 3-0 Sunset League) and faced some tough pitching that silenced their bats. The team averages 7.1 runs a game and only scored one run against the Grizzlies.

The winning pitcher for the Grizzlies, Nick Rupp, shut out the Trojans until the third inning. He struck out 16 batters and allowed only six hits.

The Trojans pitched senior Eduardo Gonzales for 4.1 innings. He allowed 7 runs and was the losing pitcher.

Despite the loss on Monday, the Trojans hitters are putting up good numbers.

In addition to the hitting, the Trojans continue to keep teams off-balance and have stolen 13 bases in two games. For the year the Trojans have stolen 65 bases and Mortensen has stolen 20 of those. He led the team last year in stolen bases with 46. Mortensen is on track to surpass this mark this year.

Prior to Spring Valley the pitching has also done well. The staff gave up three runs in two games. In the Clark game Eduardo Nunez pitched six innings and gave two runs with only one earned run and five hits. He had three strikeouts in the game. Nunez was the player of the game.

Kyle Kral pitched on Saturday and went the full game. He had a great outing, giving up only six hits and one run and had seven strikeouts.

In regards to the strength of the team, Hayes said he will find out this week.

“We expect Sierra Vista to be strong and will have to put everything together to pick up wins against them and Spring Valley,” Hayes said.