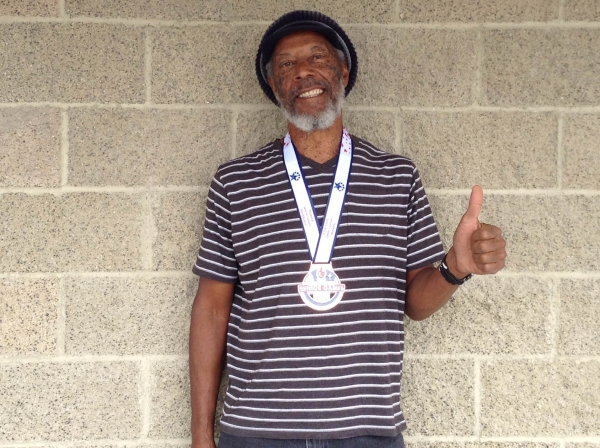 Senior sprinter Marvin Caperton came home from the National Senior Games in Minneapolis, Minnesota, which were from July 8 thru July 14, with a bronze medal in the 400-meter relay race.

Caperton is a 1972 graduate of Clark High School in Las Vegas and was on their state championship football team. He then went on to run track for UCLA and was a football player.

“I was a little disappointed in my 50 and 100 performance,” Caperton said. “I had a slight pull to the hamstring and should have beat my friend Roland. I always beat him, and he finished third. I learned that I need to be stronger and I will work on my strength for the upcoming Huntsman World Senior Games in St. George, Utah.”

Despite the disappointment he said he learned a lot about stretching and sprinting.

“Workouts have changed lately and athletes don’t stretch out the muscles as much as they did in the past,” he said. “Instead, they use dynamic drills to stimulate the muscles.”

Caperton said seniors don’t have to qualify to go to the Huntsman and this will be his fourth Huntsman games. These games will start on Oct. 5 and end on Oct. 17.

The games will have 27 athletic events and athletes who are 50 and over can participate. For more info on the senior world games see http://www.seniorgames.net/about/registrationrules/.

Capertonâs goal is to one day be the fastest man in the world in his age division. He is now 60 years old.