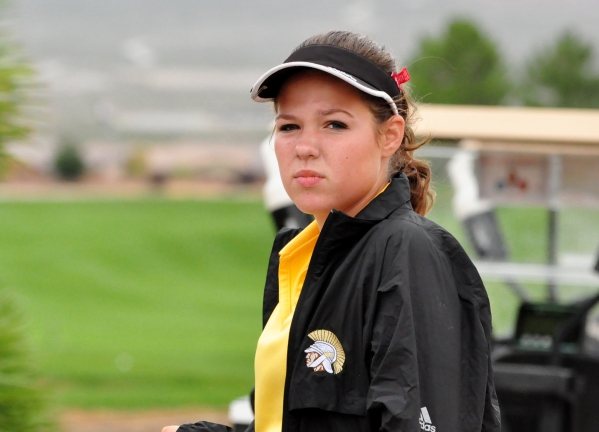 This week PVT sports honors the last athlete for the fall season, freshman golfer Makalea Petrie, who is being awarded the honor of the “most promising athlete of the fall season.”

This award is being given to the athlete that demonstrates a high degree of knowledge and talent in the sport but still needs more development to unleash their full potential.

Petrie went to state as an individual and although she didn’t win the tournament, she still did well and finished in the middle, 22nd out of 45 golfers.

The two-day golf tournament was played at the par 72 Boulder Creek Golf Club in Boulder City. Petrie carded a 104 in the first round and a 108 in the second round for a total score of 212.

Trojans coach Bob Hopkins had nothing but praise for her season and her efforts at state.

“She was the first female golfer that I have ever seen that had no penalty strokes during a state championship tournament,” he said. “Petrie will be an even better golfer if she works hard during the offseason on her short game. She could also shave off a lot of points by just improving her putting and chipping.”

The award is one of six awarded for the fall season. Last week the PVT honored five high-impact athletes. A high-impact athlete is the one that the team could not do without. He or she is the go-to person when the team needed that extra point to win the game.