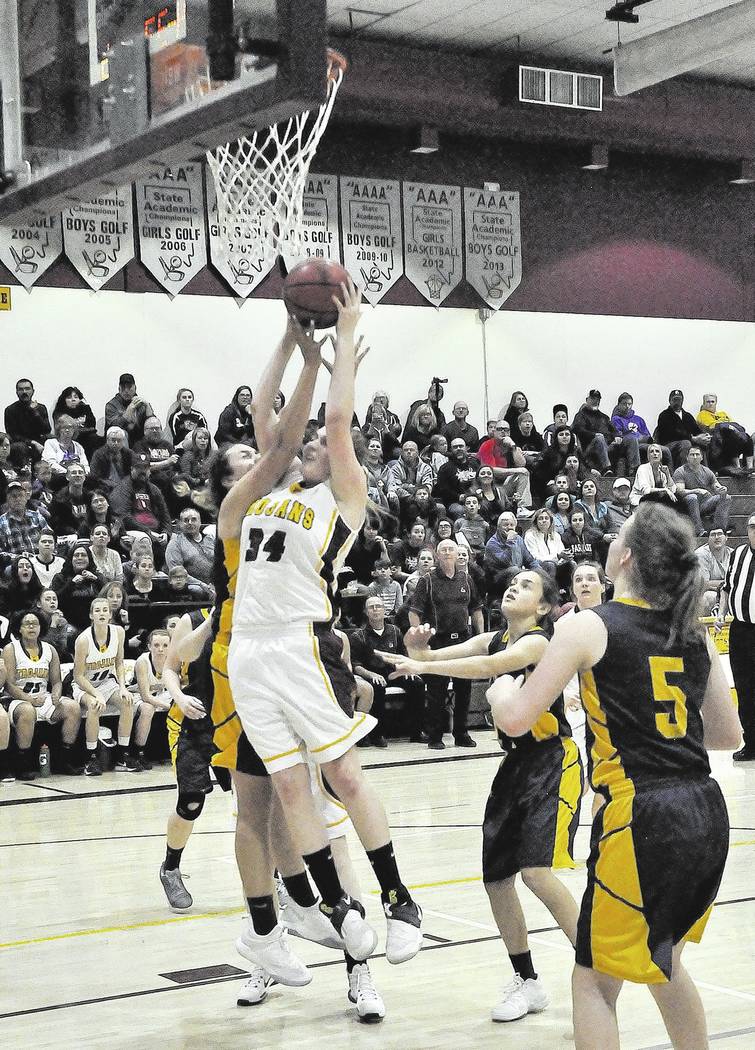 Horace Langford Jr./Pahrump Valley Times Sophomore Kylie Stritenberger developed into an inside force for Pahrump Valley this season, capping her year with 19 points in the Trojans' region tournament game. 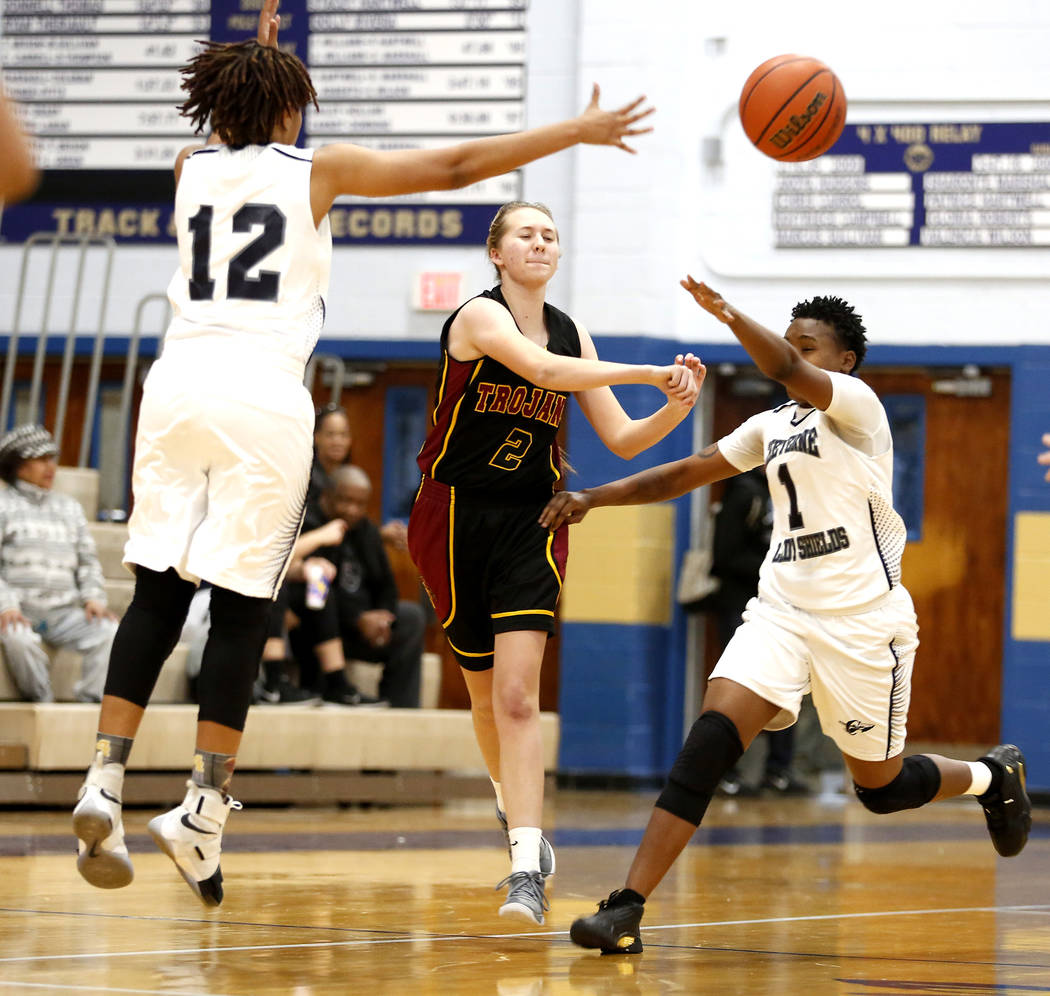 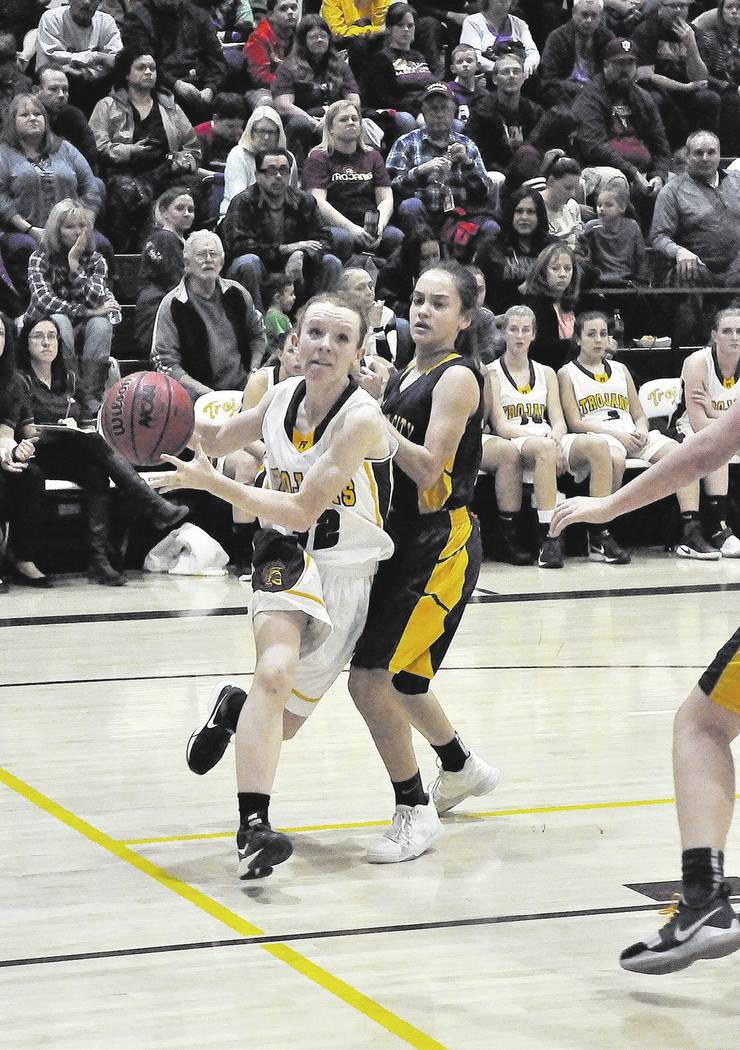 Talk to Pahrump Valley girls basketball coach Bob Hopkins about how the 2017-18 went for the Trojans, and the conversation always come back to the same place: how it ended.

The Trojans won 19 games and the Sunset League regular-season championship with a team that should have been in something of a rebuilding mode, a successful campaign by anyone’s standard. But the bad taste in the mouth left by a loss to Chaparral in the opening round of the Class 3A Southern Region tournament just doesn’t seem to go away.

But Hopkins thinks there could be a silver lining to that frustrating defeat.

“There’s nothing like tournament experience for kids, and I’m hoping that maybe the feeling we had that night in the locker room will make us hungrier for next year,” Hopkins said.

There have been a lot of next years for Hopkins, who has more than 500 career basketball victories. If he’s right that this team will add hunger to its list of assets, the Trojans could be very good indeed.

After all, they were better than expected this year.

“I thought we could be better, but I didn’t know if we could win our league,” Hopkins said. “We were trying to make the playoffs, and I was pretty sure we could, but I never have dreamed at the beginning we could win 19 games and win the league. But the kids came along faster than what I anticipated.”

The roster featured only three seniors and included several freshmen who played significant minutes. Along with youth, the Trojans had depth, with a lot of players getting on the court throughout the season.

“The Vegas schools usually have really good, quick guards, and we were able to contend with them, and our post players were able to hang in because of our depth,” Hopkins said. “We could keep kids fresh. Being that deep helped us in the long run.”

Hopkins had praise for his defense, specifically mentioning Makayla Gent and Maddie Souza off the bench and starters Skyler Lauver and Jackie Stobbe for their efforts. Hopkins cited Lauver’s early foul trouble against Chaparral — she picked up three quick ones, but the bench thought she had two — as a factor in the loss.

“I would have been able to play her on that Davis girl who was eating us up,” he says. Riahana Davis led all scorers with 22 points for Chaparral in the region tournament opener.

If defense came from a lot of sources, so did offense.

“When you look at it, we didn’t have anybody that averaged in double figures,” Hopkins said. “Kylie (Stritenberger) is as close as anybody at nine points per game. I think Sam Runnion had games where she scored 15 and 16, Alyvia (Briscoe) had games like that, Jackie Stobbe had 10 or 11 in league games. Kate Daffer had games like that, and she’s just a freshman.

“I guess we’re more of a team that’s not a one-man show. We have a lot of kids who can score for us.”

But Stritenberger, a 5-foot, 9-inch sophomore, showed flashes of being able to shoulder more of the load. She dominated brief stretches against Chaparral and finished with 19 points.

“Kylie got to be our go-to person in post down the stretch,” Hopkins said. “She stood up well and did a great job for us. The Moapa coach said she’s going to be a load, and she proved to be that. She played really well the other night (against Chaparral). I was really proud of her. In a very physical game, she hung in there.

“I really think if we had gotten past that game, we would have been fine.”

With more than a dozen players returning, four of five postseason starters back and their top post player with two years remaining, Hopkins has every reason to be optimistic about next season.

“We look forward to next year,” he said. “I feel really bad for my three seniors, because we got the program turned around now, and I wish they had some more years with us.

“Our goal next year is going to be to win the league and get to the state tournament. We’ll see where it goes from there. You’ve got to get there, and then you can think about trying to win.”