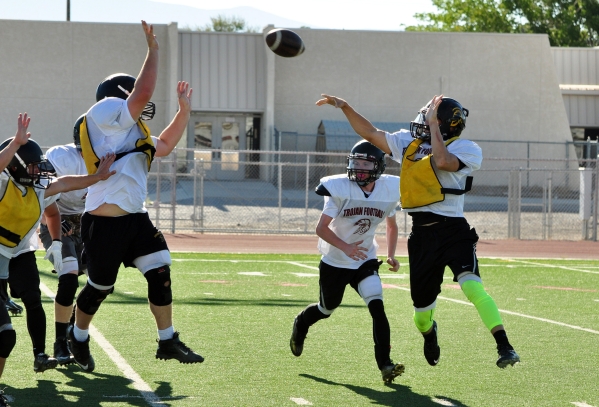 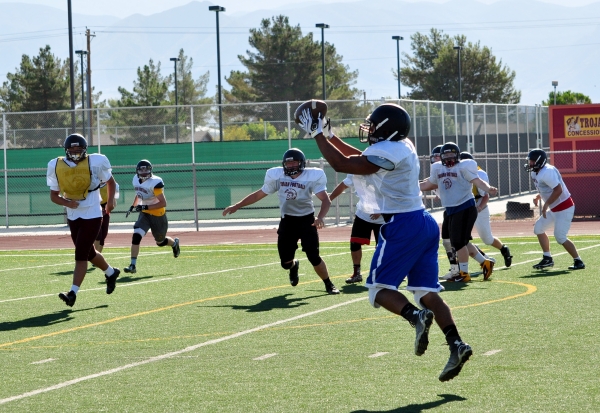 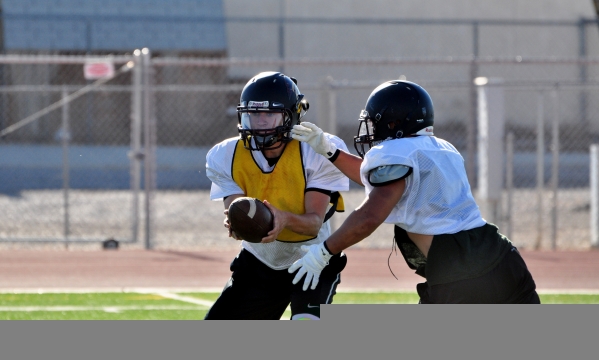 The sound of pad-on-pad emanated from the Pahrump Valley High football field, which was abnormal for this time of year. Usually the football pads don’t come on for the Trojans for another two weeks, but this year is different because of the departure of Joe Clayton and the arrival of new coach Adam Gent.

Gent scheduled an in-house football camp for the team, which was all last week and culminated in an in-house scrimmage on Friday.

“The camp went well,” he said. “At the scrimmage I was surprised to see a lot of people in the stands. A lot was accomplished during the week. We still have portions of the offense that we still need to install.”

The new coach brought on a change of the normal football schedule and instead of camp in June, it was done in July.

“Next year we will have camp at Southern Utah University,” Gent said. “I like it late in the summer, but I still want the kids to have some time off before the team hits the regular season. I was pleased with the dedication the boys have shown. The team still has a long way to go.”

The team was looking a bit anemic compared to last year where there were about 100 players (junior varsity and varsity) on the field at this time last year. On Friday the varsity team had about 22 players on the field, which translates into a tough year for the Trojans players and means many of them will be playing both ways. Gent was not too concerned with the numbers.

Gent said he will pull more players up because he knows that he has to have backups ready in case of injury.

“We will pull some more players up, but I want every kid to get as much playing time as possible,” he said.

Despite the low football turnout, the program looked like it was making good progress in learning the new offensive and defensive system.

Gent said he loves the game of football and that the new team and surroundings are adding to the excitement and although he feels some pressure, it’s all good pressure.

“I am loving how I feel right now,” he said. “I put a lot of pressure on myself. I just do my best regardless of the pressure and I am doing the best I can to make it the best program for the boys.”

He added, “There will always be unhappy parents.”

The coach’s excitement for the game has translated to the whole team.

In a conversation with the front linemen last week, all the boys could talk about was winning.

“I believe we can win and be successful in Pahrump and that starts with Pop Warner and the middle school programs,” Gent said.

Gent is a natural teacher and relates to the boys well. During the scrimmage he got excited but not to the point of anger.

“I am not a screamer,” the football coach said. “I want the kids to understand. You have to be patient with them and not scream.”

Thus far the coach said the kids are meeting his goals.

“It’s a new team for me and it’s hard to tell how good we will be just yet without seeing them play in a game situation,” he said. “I know talent when I see it and many of the kids have a good knowledge of the game. I love the big stage and we have one job to do for our next goal and that is to be 1-0 after the Del Sol game.”

That game he is talking about is on Aug. 28 at Del Sol at 7 p.m. The Trojans’ first home game is on September 4 at 7 p.m. against Sunrise Mountain. Del Sol is a Division I-A team in the Sunrise League and finished in fifth place last year, (5-4 overall, 2-4 Sunrise League). The Trojans were (4-5 overall, 3-4 Sunset League).