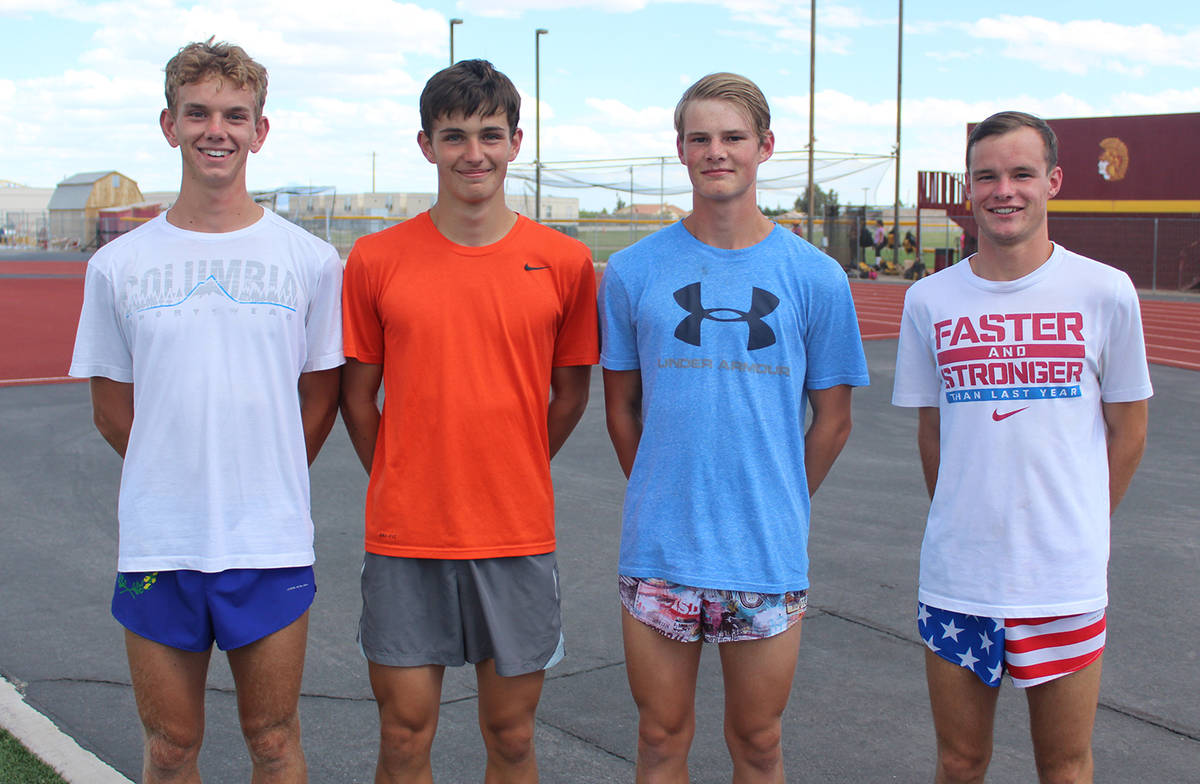 Pahrump Valley Times file From left, Layron Sonerholm, Michael Sonerholm, Grant Odegard and Bryce Odegard teamed in May of 2018 to set a Class 3A Southern Regional Championships record in the 4x800-meter relay, finishing in 8 minutes, 6.95 seconds at Moapa Valley. 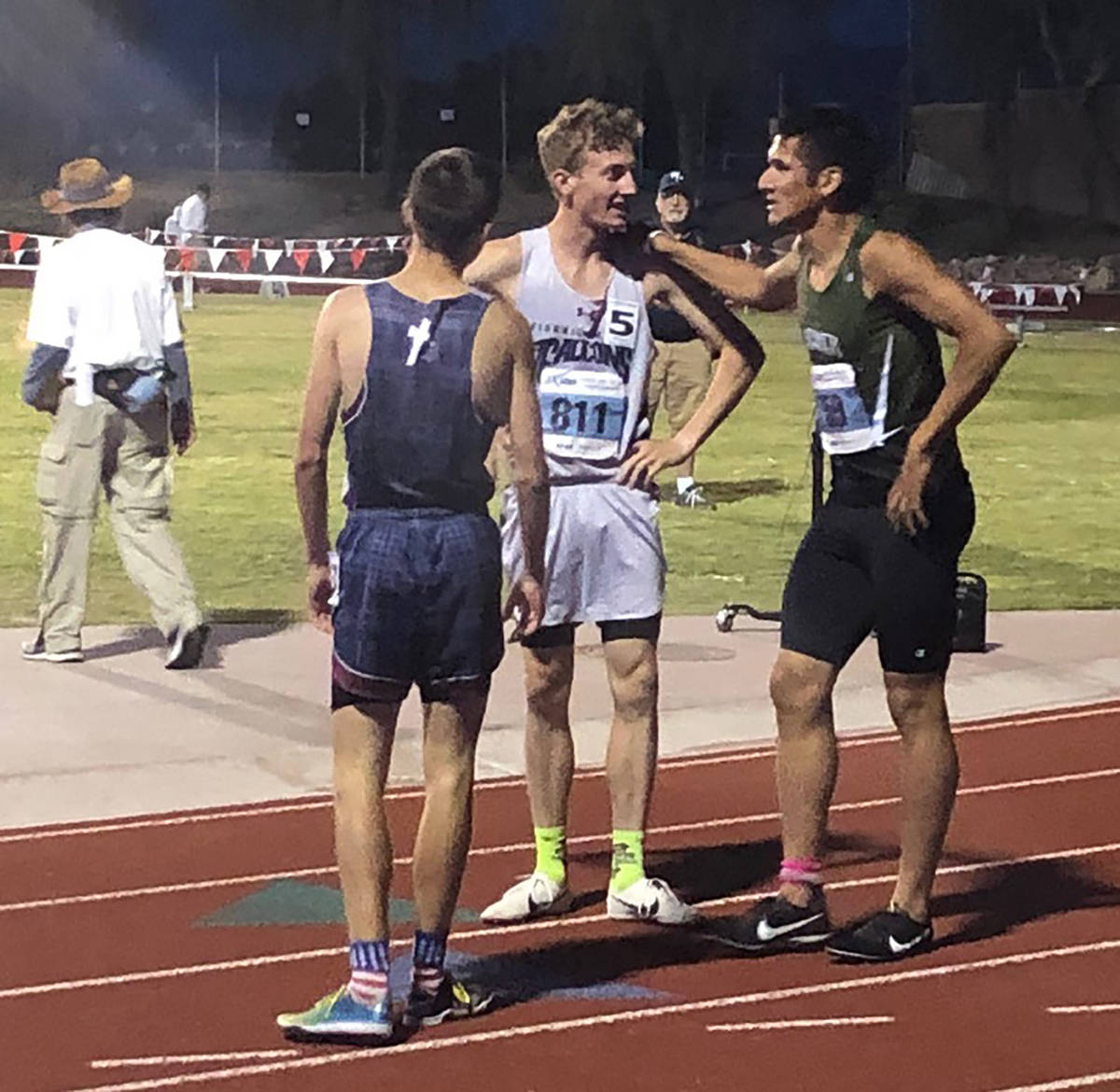 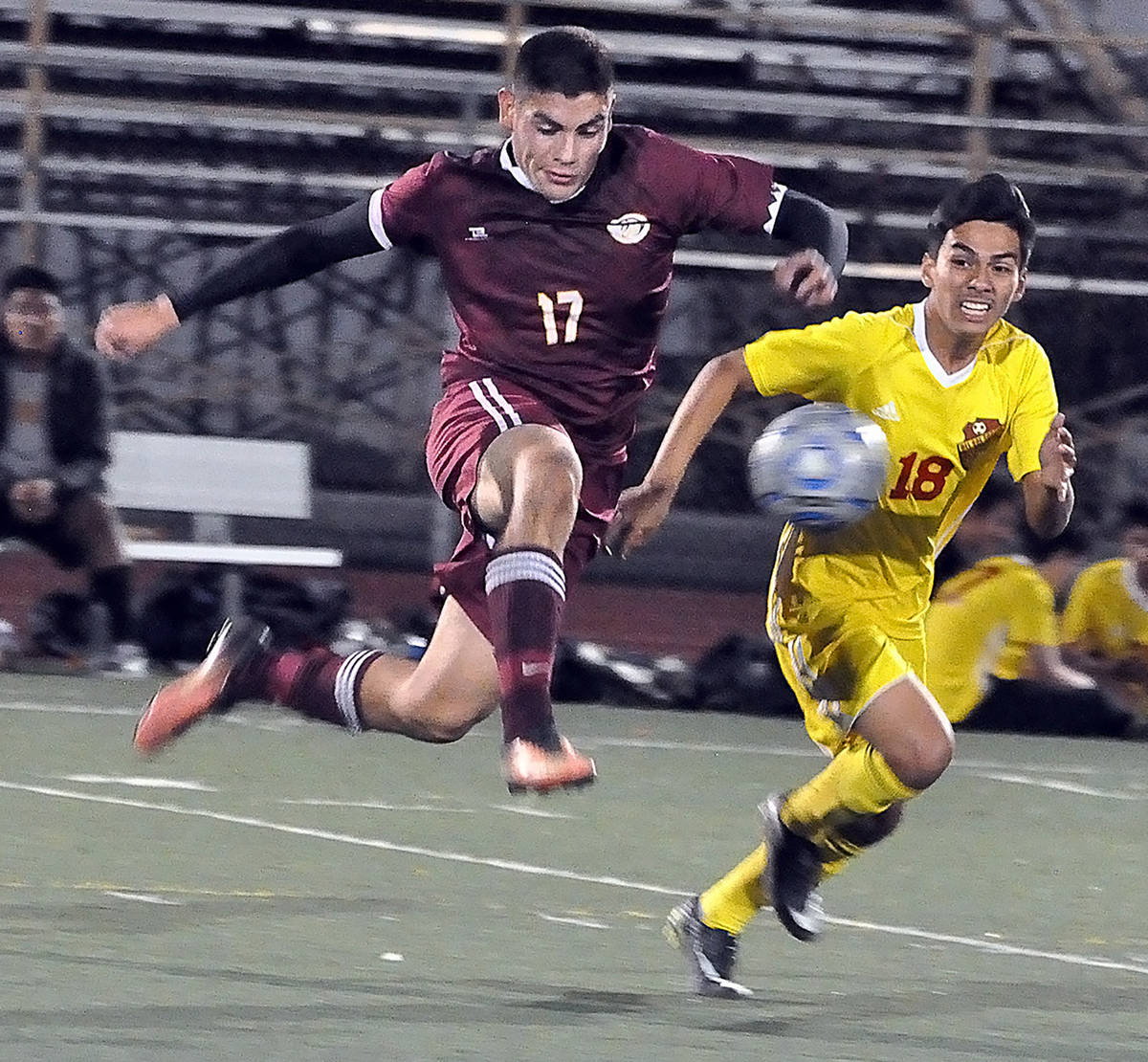 Horace Langford Jr./Pahrump Valley Times file Jose Chavez was named the Sunset League MVP after leading Pahrump Valley to its first playoff berth in a decade in 2018, totaling 33 goals and 13 assists as the Trojans ended years of losing records with a 12-9-1 season.

By next week, this space will be filled by something other than sports, for the simple reason that there is news happening. Sports, not so much. But when and if there is something to report, even if it’s just further cancellations and postponements, we will, of course, get that information in the paper and on our website.

Last week, I took you on a short trip down memory lane, and it occurred to me that having to narrow down the highlights to fit the space left some pretty good stories on the cutting room floor. Plus, I’ve got a good story for Friday and needed to fill space Wednesday to make that happen. So here we go, one more time before Pahrump Valley Times sports goes into hibernation.

Two of the best moments of the past couple of years have come on the track. One was a region meet record, the other was a truly dramatic finish of a race between very good distance runners.

Two years ago, Pahrump Valley High School’s 4 x 800-meter relay featured two sets of brothers, then-seniors Bryce Odegard and Layron Sonerholm and then-sophomores Grant Odegard and Michael Sonerholm. Any success at all would have made those four competing together a good feature story, but just any success simply was not enough.

“We run together almost every day in practice, and Bryce and I have been running on the same team since sixth grade,” Layron Sonerholm said.

“It had been a dream for them since middle school to compete and win as a group,” Pahrump Valley coach Fred Schmidt said. “Not only did they compete and win, they set a new regional record for the event. So that was a great moment for them and the team.”

“When I got the baton, my dad was standing over at the 300 start line, and he told me about 100 meters into my race, ‘Bryce! We have a shot at the region record!’” Bryce Odegard said. “And I kind of went, ‘Shoot, we gotta go.’ That was the first moment we thought about breaking this record.”

“I think we all were running pretty well, but we didn’t expect to run that fast,” Michael Sonerholm said. “We were thinking about maybe getting first, competing for that spot, but we had no idea that we could run that fast. I guess we all just had good days and decided not to mess it up.”

“It definitely seemed possible looking back on it now, but it didn’t seem possible before,” Grant Odegard said.

They ran the relay in 8 minutes, 6.95 seconds, not only setting a meet record but breaking the school record by 13 seconds. They didn’t stop there: Bryce Odegard won the 800, 1,600 and 3,200; Layron Sonerholm finished second in the 1,600 and 3,200 and third in the 800 (the 800 and 3,200 were personal records); Michael Sonerholm finished fourth in the 3,200; and Grant Odegard took fifth in the pole vault. That sent all of them to the state championships as individuals.

Then last year, in the 1A state meet, the 1,600 shaped up to be a barn-burner, with Beatty junior Jose Granados and senior Jared Marchegger and sophomore Teagan Hansen of Sierra Lutheran expected to contend.

And it did not disappoint.

The three came down the stretch almost literally neck and neck, with Granados crossing the line in 4 minutes, 29.08 seconds. Marchegger was less than a half-second behind at 4:29.42, while Hansen was just more than a second further back at 4:30.72. All three times were personal records.

The race unfolded pretty much as Granados had planned it in advance.

“Stay behind them, for the last 400 pick it up and at 300 maybe pass them, then from the 200 it was just going to be a full-on sprint,” he said. Indeed, the Hornets junior was behind the Falcons senior after the first lap and between the Sierra Lutheran teammates after the second. He was basically even with Marchegger after the third lap, passed him with a bit more than 200 meters to go and then held him off at the finish.

“I feel amazing,” Granados said after the race. “I’m very pleased. I’ve got the school record under my belt now.”

And no review of the past two years of highlights would be complete without mentioning the biggest turnaround of any program among the county’s high schools.

Led by Sunset League MVP Jose Chavez, the 2018 Trojans ended that pattern, and a dramatic 2-1 victory over Del Sol in the season finale locked up a spot in the regional playoffs for the success-starved Trojans.

“It’s great for us because it’s been over a decade,” a jubilant Trojans coach Chris Roberts said. “In two years with our program, we were able to turn it around and get in the playoffs. That’s huge for us.”

Fittingly, on Senior Night, senior Jose Chavez, the team’s leading scorer, scored both of Pahrump Valley goals, the first on a header with about 10 minutes left in the first half with an assist from Koby Lindberg.

“It was not meant to be like that,” Chavez explained. “Usually I flick it back into the runs, but I saw the keeper was on the near post, and I flicked it back to the far post.”

The goal sent the noisy crowd of a couple hundred fans into a frenzy, and the vocal support and the home field helped this game have a much different result than the teams’ first meeting, a 3-0 Del Sol win Oct. 1 in Las Vegas.

“It was the energy,” junior goalkeeper Ian Kingsley said. “We definitely had the crowd going for us. The first Del Sol game I just don’t think we were awake the first half, and they capitalized on us. But this game, we knew that was not what was going to happen.”

Kingsley saved a penalty kick late in the game, and the Trojans were in the playoffs. They didn’t last long, but they proved it wasn’t a fluke by getting back to the postseason last fall.

Some things change, some things stay the same. Bryce Odegard is up at the College of Idaho, knowing the National Association of Intercollegiate Athletics has called off the spring season. Layron Sonerholm is also in Idaho, on an LDS mission in Pocatello. Jose Granados and Grant Odegard are seniors, hoping to have at least a championship season on the track. Ian Kingsley passed up soccer for cross country this past year, and he and Koby Lindberg are hoping golf season resumes.

But right now, we’re all on hold. And as the weather warms up, the empty feeling will get worse.

Hang in there everybody, and stay safe.