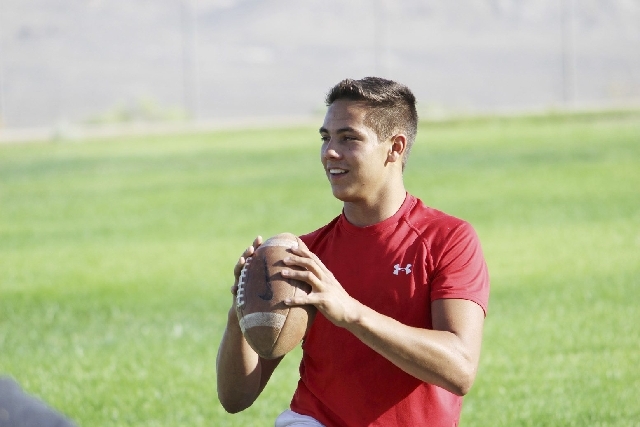 The Muckers take to the field against Indian Springs in their home opener at 7 p.m. next week and still have not chosen a starting quarterback.

Coach Duffy Otteson said the choice will be made soon.

One fan who wished to remain anonymous, but who has been watching THS play for over 28 years said, “It will probably come down to Jimmy Whithers because he has better legs and can run the ball better than Connor Friel. Friel has a good throwing arm though.”

Otteson has other positions to worry about, too.

“There is competition all over our team right now. We have a lot of things to sort out by the game and we have a scrimmage this weekend in Round Mountain. That will also answer a lot of questions. No one has won a starting position yet on the team, and the starting positions will be open every game,” Otteson said.

This week was the first week in pads for the Muckers, who are still working on fundamentals.

“We have been doing lots of footwork drills and trying to get some jump in their step,” the coach said. “It seems to be working. We have one kid, Danial Todd, a senior lineman. It is his first year ever playing football, and from our spring camp to now he has improved his footwork and agility tremendously. He went from a kid that would have never seen the field to a possible starter. So, the drills we have been doing are working and I am excited to get the kids into pads today. Pads make a big difference in what you can do in practice.”

Otteson feels he is way ahead compared to this time last year.

“It’s not normal to be this far ahead when you only have two returning starters on offense, but the kids have worked hard all summer and have been working together every day in practice. The players are only going to go as far as they want to push themselves, and so far they are doing great. I’m very confident in the team we have this year,” he said.