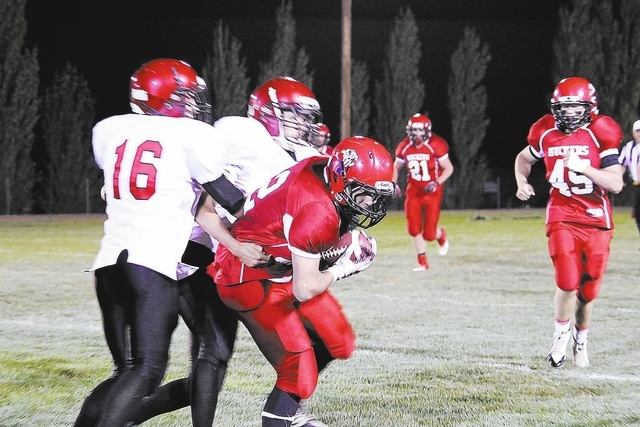 The Tonopah Muckers football team won Friday’s away conference game against Round Mountain by a score of 58-26. With this win, Tonopah improves to 3-2 overall and 2-0 in league. The offense is averaging 345.6 yards rushing per game, 117 yards passing per game and has a total of 26 TDs.

Coach Duffy Otteson was pleased with the Muckers’ performance. They have been working so hard to counteract their issues and now they have the reward.

“We minimized our mistakes, the kids did their jobs right. They played good with all their hearts and enthusiasm and they played hard the whole game,” Otteson said proudly.

The result of the teamwork was a convincing victory that showed the best face of Duffy Otteson’s players, who dominated the game from the very beginning without showing weaknesses and played big. The score was 36-6 at halftime.

Quarterback Connor Friel was a key player in this game, although he preferred to highlight the team’s work over the individuals.

“We played as a team, we worked it out,” Friel said. He recognized that he had good support on the field last Friday and was very proud of the team achieving this victory.

Matt Misener played against Round Mountain and silently dedicated the game to his Aunt Shelle Blakemore who passed away last week. Misener had his best game ever and had 162-yards rushing and averaged 10 yards per carry. After Round Mountain Misener has 753-yards rushing total on the year, which is more than some teams at this point. Misener is expected to play on Friday despite his aunt’s funeral in Oregon on Wednesday.

”Every week I play for someone and I always want to make sure that I always make them proud. I want to always have a reason why I have my best game and I don’t want to let my team down. At Round Mountain I had my best game all season and that was the week of my Aunt Shelle,” Misener said.

Connor Friel played his second game for the injured Jimmy Withers and had another great game. Friel was 8-16 for 145 yards and 1 TD. He also had 4 carries for 25 yards. Withers had an MRI last week, but there is no word on when he will return.

The next Muckers opponent will be Spring Mountain on Friday at 7 p.m. at home. The visiting team is 0-1 in league after losing against Pahranagat Valley 22-54 last Friday. Despite this defeat, it is a very capable team.

“They are a tough team, probably the toughest team we’ve played this year, so we have a lot of work to do,” Otteson said.

The team will play one more week with key players missing due to injuries.

“We have more kids hurt again, so we’re scrambling again this week,” he said.

The two main players out are quarterback Jimmy Withers and Jeb Ayers.