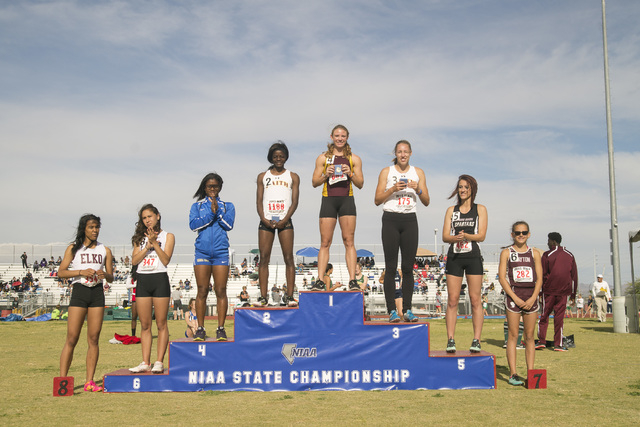 The Trojans track team had one state champion, Kelbie Middleton, from their performance at the high school Nevada State Track Championships on Friday and Saturday.

Pahrump sent three girls in individual events: senior Middleton in the 100-meter and 200, junior Meghan McDermott in the 100 hurdles and freshman Sydney Dennis in the 1,600-meter and the 3,200-meter.

Middleton finished third to Nikodemus and Maxey in the 200.

Junior McDermott finished in seventh place (16.82). According to Trojans Athletic Director Ed Kirkwood, Dennis was a no-show due to a soccer injury.

The boys track team sent Nico Cipollini in the pole vault and he scored the Trojans’ only points, finishing in sixth place out of eight with a vault of 11 feet, 6 inches.

Faith Lutheran took the state championship in both boys and girls for the second year in a row.