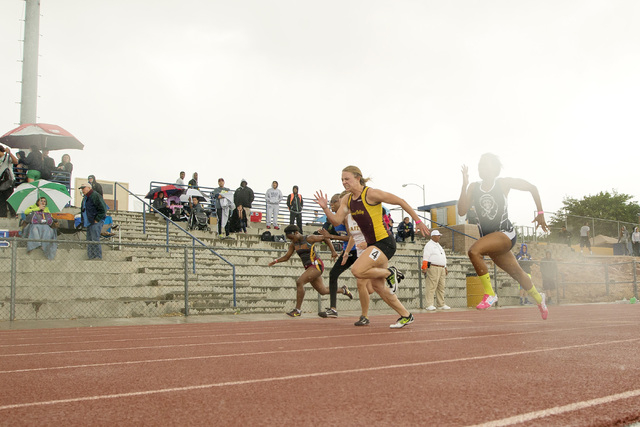 The top four in each event will attend the Nevada State High School boys and girls Track and Field Championship meet this Friday and Saturday at Del Sol High School in Pahrump.

The boys will send one athlete to state, junior pole vaulter, Nico Cipollini. Cipollini posted a 12 foot vault for second place at the regional meet. This mark places him tied for tenth in the state in his division. Senior Caleb Witshken of Moapa Valley has the best mark in the state at 15-6 and is the favored vaulter. He posted a 15-1 at regional.

Cipollini said the regional meet was the best meet of the year for him.

“During the meet I was relaxed because I had known all the work in the off-season had prepared me for this moment and everything lined up just right,” he said.

He said during the regional he was in second place after his first vault. His second vault at 11 feet separated him from the other vaulters and it was just him and the leader left.

“I was the only one left and was calm and I had made it to state at that point,” Cipollini said.

The sense of calm led him to vaulting 12 feet, which was a personal record for him.

The girls will send senior sprinter Kelbie Middleton to state who took first place in the 100-meter dash (12.59 seconds) and second in the 200 (24.55). It was the first time she beat senior Clarissa Maxey of Faith Lutheran in the 100.

Middleton edged Maxey out again in the 200. Senior Cayla Nikodemus finished in first place (24.41) in the 200.

Maxey had the top time for the Division I-A in the state (11.88), which makes her the favored sprinter. She will need to run that time to beat Middleton this week.

Meghan McDermott placed fourth in the 100 hurdles (17.53). She will be up against junior Kellie Kinsman of Spring Creek who took first place (15.52) in the Northern regional meet. She said she was a bit disappointed because she didn’t qualify for state in the triple or the long jump.

“I either do really well in the jumps or really well in the hurdles,” she said. “I really haven’t found that equilibrium yet. I am perfectly fine with that, which means I get to focus on my hurdles instead of worrying about both.”

She said next week too, she gets to go to an event called “LA Jets” which is in El Cerritos, California. She said she will be able to jump there and she will also participate in Junior Olympics and she hopes to maybe become a national champion in that.

On her hurdles, McDermott doesn’t think she was on top of her game during the regional meet.

“I only got a couple hours of sleep the night before,” McDermott said. “It was not a good time before me. Now that I have a good week of preparation I am thinking my time will be much better at state.”

She said the fourth place finish in the 1,600 she didn’t expect.

“My 3,200 felt really good,” Dennis said. “I was in seventh place most of that race and then on the last lap I kicked it in and started to pass people. That was really cool.”

The girls 4×100 relay team is composed of Amber Hill, Kelbie Middleton, Meghan McDermott and Ashley Floyd. The team finished in second place (50.38). The team to beat will be the Sierra Vista team, who took first place in the Southern regional (49.85).

Dennis said she wants to be able to stay with the top four girls in the 3,200 and her goal is to get a personal best in both races.

Her coach Craig Rieger said she will be a great runner by the time she is a senior. He believes just that much experience will make a big difference. He expects her to stay with the pack and hang back like she did in the 3,200.

“She runs better from behind, where she can see the top runners ahead of her,” he said.