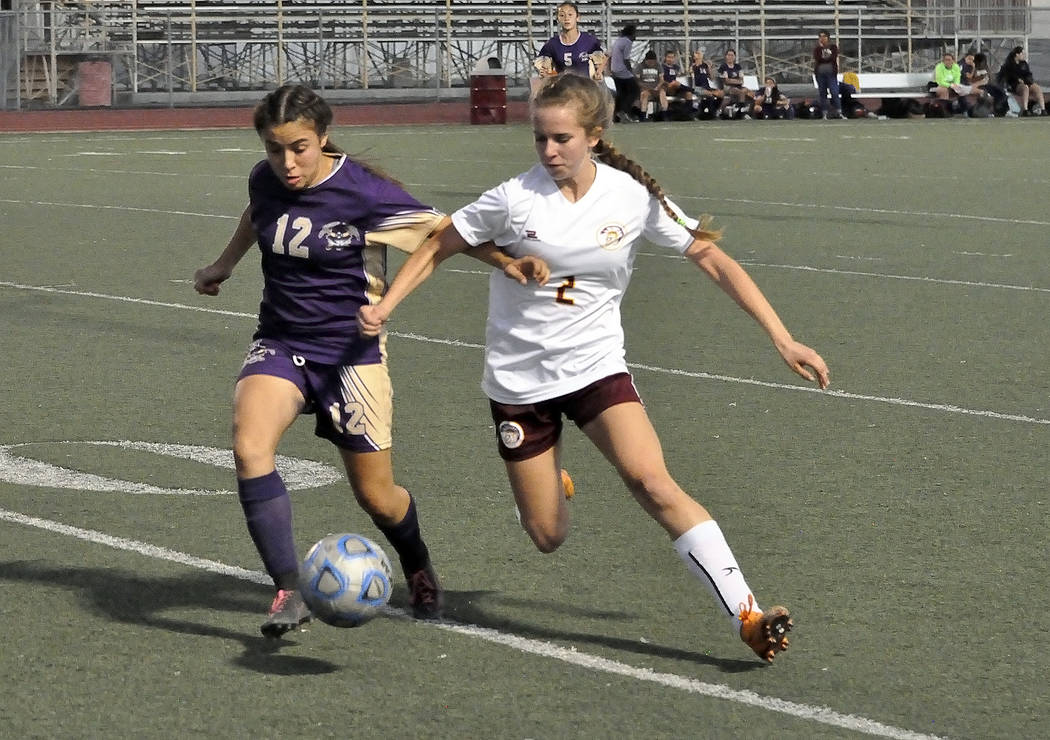 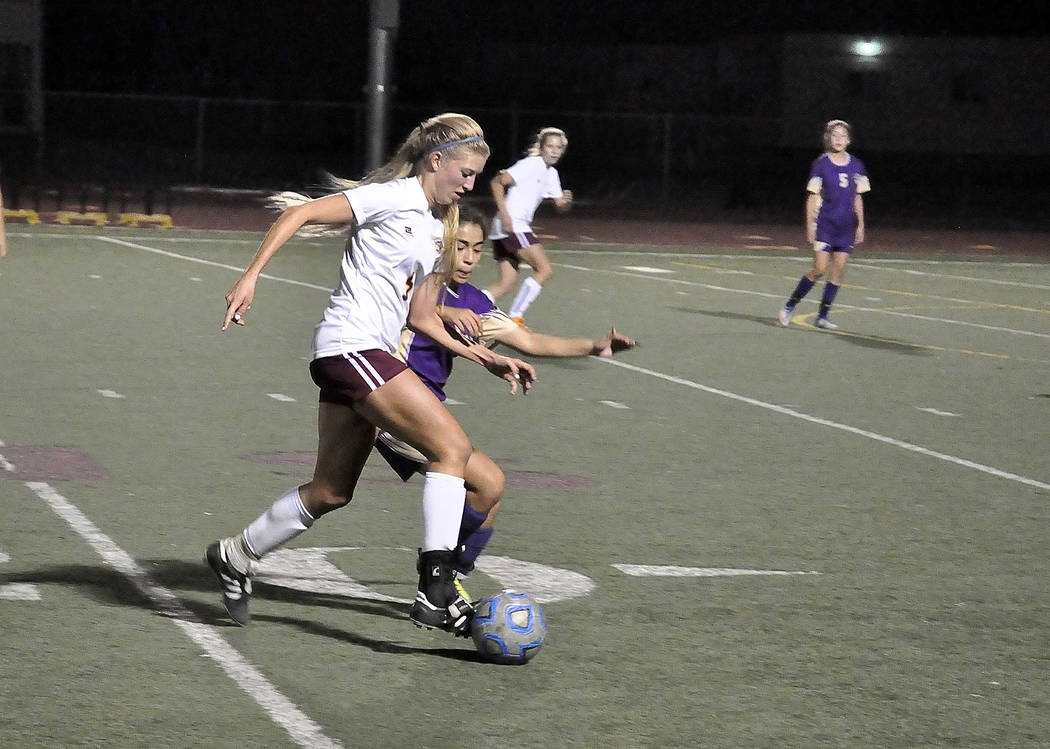 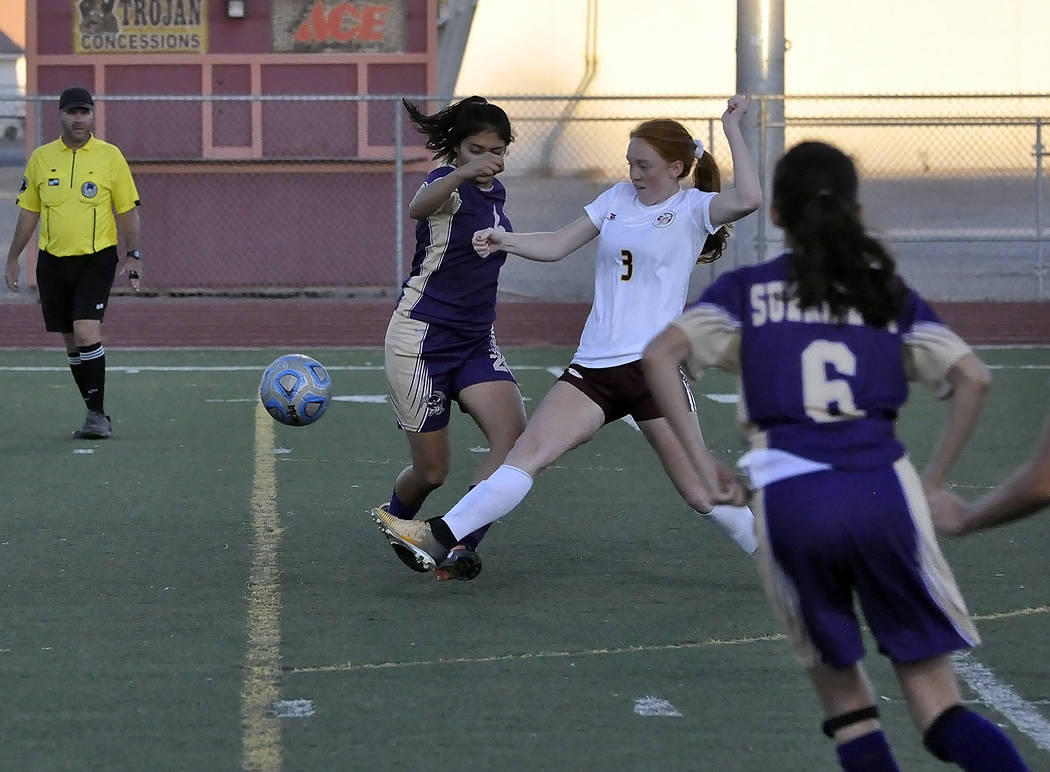 Horace Langford Jr./Pahrump Valley Times Senior Kaitlyn Carrington attacks the ball during the Sunrise Mountain game on Wednesday. The team tied the Miners 0-0 but advanced as the number one seed because they beat them earlier in the year. 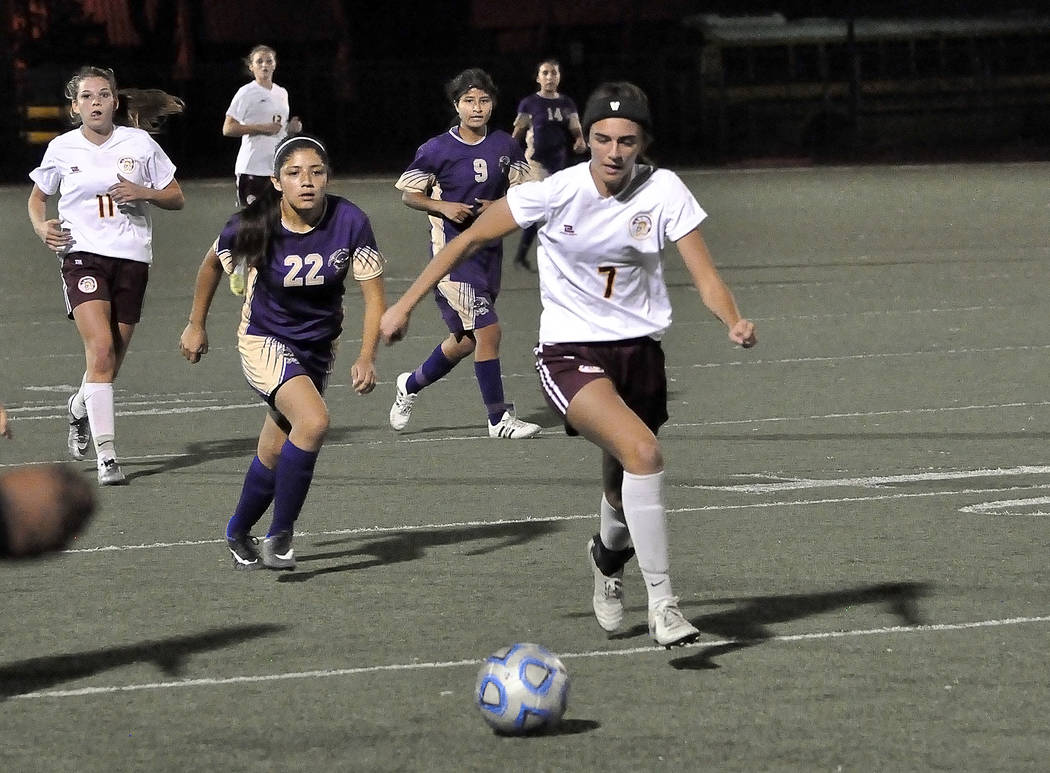 Horace Langford Jr./Pahrump Valley Times Senior Vaniah Vitto races after the ball at the Sunrise Mountain game on Wednesday night. The girls finished the game with a 0-0 tie.

The Trojans girls soccer team fought Sunrise Mountain on Wednesday for the Sunset League title and tied the game, 0-0.

Despite the tie, Pahrump Valley still came out on top because the two teams met at Sunrise Mountain with the Trojans (14-2-3 overall, 8-0-2 Sunset League) coming out on top 2-1 in that contest.

The outcome of the game means that Trojans will be the top-seeded team going into the regional playoffs, starting next week at 4 p.m. on Nov. 1 at Bettye Wilson Park in Summerlin, 7353 Eugene Ave. The Trojans would play the number four seed from the Sunrise League and that should be Virgin Valley (10-6-4, 5-3-3).

The last time the Trojans played Virgin Valley was at the Mesquite Cup at the beginning of the season and they beat them 1-0.

On Wednesday, the game against the Miners was hotly contested. The Miners had one player on each of our attacking players. Despite the fierce defense, the girls managed to dominate in time of possession and the number of shots on goal.

After the game, Trojans coach Julie Carrington said she would work some things before the playoffs.

“We need to utilize our communication skills on the field between players and stay aware of our surroundings,” she said. “The coaches feel our defensive line is very strong but offensively we need to work on communication, stronger passing, and quicker decision making.”

After the game, the girls honored the following seniors: Kaitlyn Carrington, Vaniah Vitto, Sydney Dennis, Kathy Niles, Alyvia Briscoe and Beatrice Favella, who is not a senior but is an exchange student at the school.