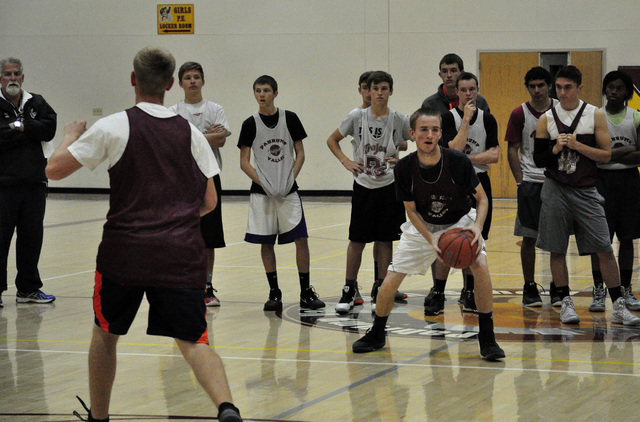 The Trojans played their first basketball game at Sunrise Mountain on Tuesday night and lost 69-39. Pahrump (0-1 overall) failed to keep it close in the first quarter with the Miners (1-1 overall) scoring 21 points in the first to the Trojans’ 13. At the half the Miners led 32-17.

In the second half Pahrump tried to turn things around and were able to score 22 points, but the miners outscored them by 15 points.

Trojans Coach John Toomer was not discouraged by the team’s first outing.

“We had times that we looked confident and executed our offense just like we practiced it and then we would have a trip or two that we forgot what we had done earlier,” he said. “As a team we shot 42 percent from the free throw line, 28 percent from 2-point range and 27 percent from 3-point range. We had moments when we played really good team defense and that kept us in the game.”

Toomer believes the team needs to be in better condition so that they can play harder in the second half.

Danny Foss played well on both ends of the court, Nolan Toomer was the leading scorer for the Trojans with 10 points.

TJ Milk and Parker Hart both had 7 points.

“Sunrise Mountain shot extremely well and probably had a very high percentage of shots made,” Toomer said. “They are very quick and executed their offense very well.”

The team is on the road at the end of the week for a tournament in Hawthorne. They play Bonanza in Las Vegas on Dec. 8 and then play Clark at home on Dec. 10 at 6:30 p.m.