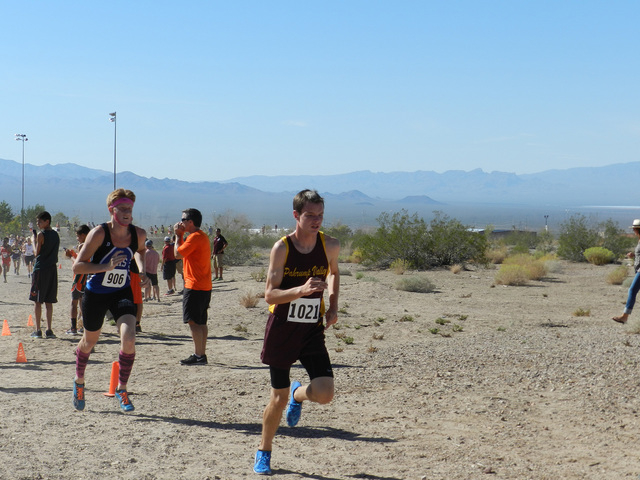 The Trojans cross-country regular season is over and now the team is concentrating on the division finals this Saturday.

The division finals will be at Foothill High School in Henderson. The Division I-A boys run at 10 a.m. and the girls run at 8:40 a.m.

According to the coach, the divisional finals this week will help determine who the top runners for the Trojans will be for the regional championship on Oct. 30.

For the regionals, the Trojans will be able to submit 10 runners, but only seven will run and the other three will be alternates.

The regionals will then determine which teams will run at state. The top three teams will qualify to run in state.

“If we work hard we can compete with SECTA who I think will be the third team, but the guys must really work hard,” Kolozieczyk said.

If Pahrump doesn’t qualify as a team, then the top five runners from non-qualifying teams will go as individuals.

“If we don’t make it as a team, we have a good chance of sending Bryce Odegard and Layron Sonerholm to state. Fenny Descuatan has a good chance of going but she must drop her time,” the coach said.

The only runner for the girls was sophomore Alicia Quiroz, who finished 56th out of 102 runners with a time of 21:38.5.

“They have this meet so that for the freshman and sophomores, who might not run on the varsity teams. Bryce did very will and impressed a lot of people,” Kolozieczyk said.

Kolozieczyk said this year the team has worked really hard to improve their times and he named a few runners that stood out.

Sophomore Quiroz for the girls is one of those runners. At the start of the season in her first Division I-A meet she ran a 27:23 for a 5,000-meter course. At the last division meet she finished with a time of 25:00 minutes and was the third best on the team. She has improved her time by almost two minutes since her first run for the team on Sept. 10.

“When she started I wasn’t sure she was even going to finish a meet this year. Then at the Faith Lutheran meet she was our number three runner,” he said.

For the boys, freshman Ulisses Perez, sophomore Stephen Thelaner and senior Joseph Zarabozo were the most improved runners.

All year long the coach had been looking for two more boys to finish under 20 minutes. At the last meet at Faith Lutheran, Perez had a time of 20:06 and Thelaner finished with a 20:43. Both runners are close to meeting that goal.