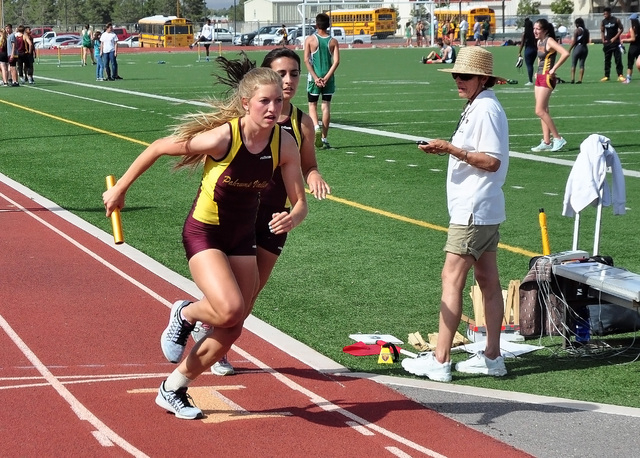 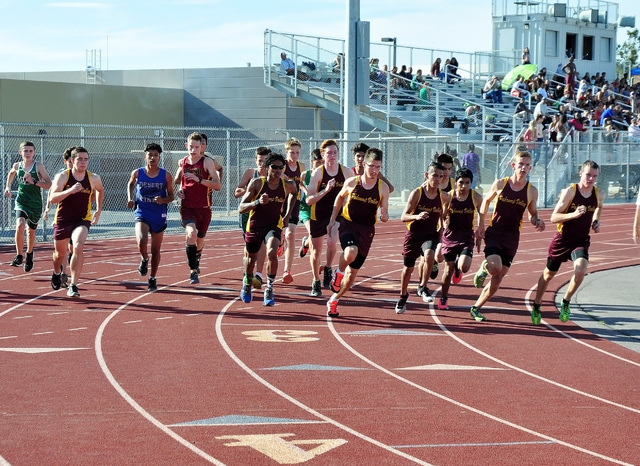 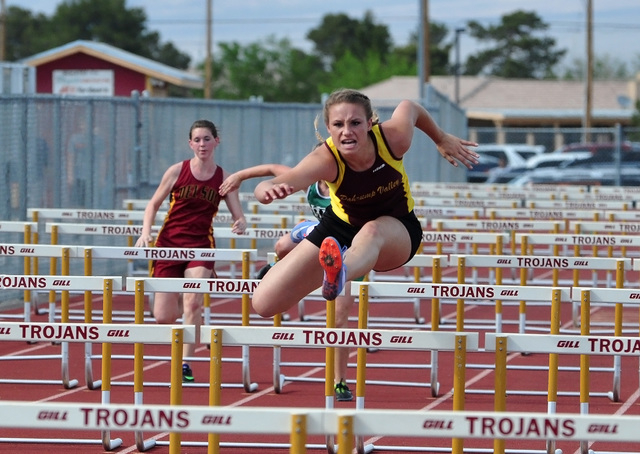 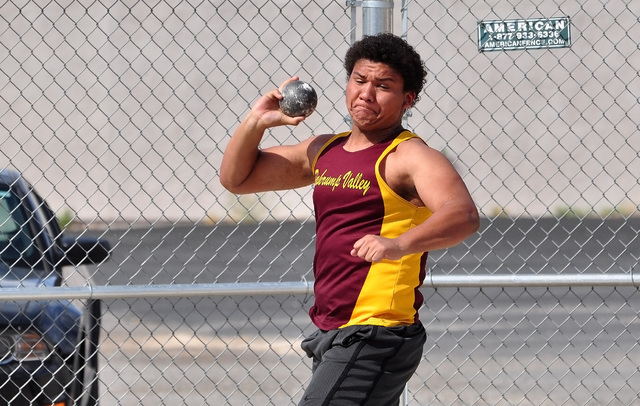 Trojans track dominated the field in their only home meet and broke two school records. The team ran against Del Sol, Desert Pines, Virgin Valley and Beatty as both boys and girls beat their opponents.

What was interesting was that Odegard said before he broke the record that he didn’t feel in shape.

“I really haven’t been in shape this year because of basketball,” he said. “I just wasn’t able to train (for long distance). I think my best event is the 3,200 but the 1,600 has been better for me this year because of my shape. So hopefully by regionals I will be in better shape for the 3,200. If regionals were tomorrow, the 1,600 would be it. I really haven’t been able to really finish it.”

“I feel really good right now, because so far in every divisional meet I have gotten first place in the hurdles,” McDermott said before the meet. “At the invitationals, not so much because I have been going up against the bigger schools. But so far in the weekday meets I have been first. I am thinking regionals will be pretty bright from there.”

The boys had numerous other first place finishes.

Trojans coach Wes Icard was disappointed that his 4×800 team didn’t get to take on the Desert Pines team despite them running in the meet.

“They are in the top two and I guess we are just going to have to wait for bragging rights,” Icard said. “Their times are right there with ours.”

For the Trojans, Albertson is also looking to break a school record in the discus, which is 148-10 held by Reynaldo Veloz.

He says the only thing holding him back is stress.

“I am overthinking my throws a little bit,” Albertson said. “If I just kind of relax I think I can get it.

In another field event, Devlin Dillon finished second in the high jump (5-08.5).

Icard has a lot of confidence in him and thinks he can break 6-00 this year.

“He may break it this meet,” Icard said at the beginning of the meet. “I think today would be a perfect time because he practices here all the time. The conditions are good. He has his mark here.”

There was a significant gap between first and second as Odegard took off and had a good 300-meter lead on the field.

Dylan Montgomery also ran that race. Trojans coach Wes Icard said he put him there to see what he could do.

Montgomery has been staying away from the hurdles due to a minor injury.

“I will be going back to that soon,” he told the PVT. “What events I do at regionals will depend on the schedule because I don’t want to do three events on the same day.”

At the moment, he said he was just looking to do triple jump as far as field events. He has done discus and high jump.

“Other than triple, I think I will just stick to running,” Montgomery said.

Speedwise, he doesn’t think he is at his peak and feels he can cut some time with better technique.

“I definitely think I still can get faster,” he said. He is the fastest sprinter the Trojans have, running a 100 in 11.6.

The Trojan girls also picked up some other first place finishes.

The girls only ran one relay, the 4×800 and won it (Alicia Quiroz, Dennis, Vaniah Vitto and Grace Gundacker).

Havel said she was doing better than last year.

“I have missed some meets this year because of family needs,” she said. “I think I am doing better and working really hard to get to state next year. This year I am not quite there yet, but I know next year I will be. My goal this year in discus is to throw 98 in discus and 34 in shot.”

Shay, the Trojans next best thrower, said she is being held back by her form.

“I am also not lifting as much weights as I was before,” Shay said. “So I want to hit the gym more and then form is the major key that I have to work on. This is the year we get serious to prepare for our senior year.”