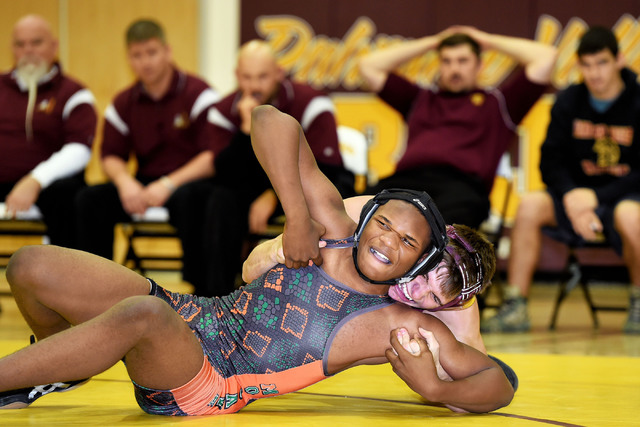 Dustin Riley works his Mojave opponent over just before he gets his pin on Tuesday night. Peter Davis / Special to the Pahrump Valley Times 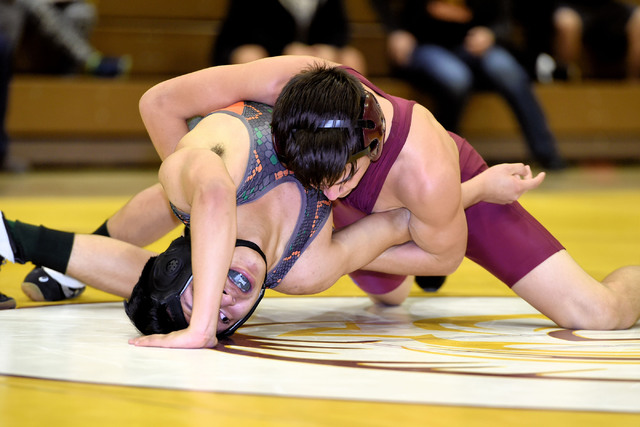 Dylan Grossell got Pahrump on the board with this pin. The Trojans were behind 23-0 when he got the win. Peter Davis/Special to the Pahrump Valley Times

The Pahrump wrestling team ran out of experience to go toe-to-toe with last year’s regional champ Mojave on Tuesday, losing, 50-24.

One might even say the Trojans wrestlers stepped out of one fire over the weekend, and then stepped right into another one on Tuesday night.

Over the weekend the Trojans went to the Bulldog Grappler, where they lost four straight matches, losing to Liberty, Coronado, Durango and Centennial and then had to wrestle last year’s regional champion, Mojave, on Tuesday.

And if that wasn’t enough, two heavyweights got injured and couldn’t wrestle Saturday. The team had three starters out on Tuesday.

Rieger said even with a healthy lineup, the result might have been the same.

“The Centennial Grappler was tough,” Trojans coach Craig Rieger said. “We wrestled some good schools. We got some good mat experience.”

Some people might say, “But was it worth it, because you could have used those starters against Mojave.”

Rieger is not one to second guess himself. His program prides itself on being able to compete with the big schools and despite losing wrestlers he said his young team needed that mat experience.

This leaves mat time. That’s why the team wrestled at the Bulldog Grappler, to get that valuable experience.

On Tuesday, Mojave set the tone early on in the match, winning the first four classes and starting the dual 23-0. But then the Trojans came alive with sophomore Dylan Grossell (132 pounds), who brought the crowd back into the match with a stunning second-round pin that put the Trojans on the board with six points.

The next wrestler was sophomore Tristan Maughan (138) who put himself deep in the hole to start and was losing 18-6 in the third round. The crowd got behind Tristan.

“I could really feel the energy from the crowd,” he said.

Things looked hopeless when he suddenly was able to get a reversal on his opponent and then a pin.

“That boy from Mojave, we saw that he was gassed,” the coach said. “Tristan just has heart and he tries hard.”

“I noticed how tired he was,” Maughan said. “I used that to my advantage and I could tell he was giving up.”

The crowd went wild and the score was 23-12 with Mojave still in the lead.

The next wrestler was junior Ulisses Perez (145) who lost by pin making the score 29-12.

But then Dustin Riley (152) won his bout with a second-round pin.

“This kid can go to state,” Rieger said. “He is strong and aggressive.”

Then David Diaz (160) took his opponent out with a first-round pin and suddenly Pahrump had crawled back to within five points, 24-29.

“We will further David’s chances of making state by having him cut weight, dropping down to 145 pounds,” the coach said. “At 160, he just looks so small. This will improve his chances for state.”

That’s as close as Pahrump got on Tuesday.They then lost their last four bouts.

The Trojans have another invitational at Chaparral on Jan. 21 before their last home match of the season.

“The practice room and live mat experience is what we need to get ready for regionals and my goal is to get as many as we can into the state tourney,” Rieger said, stressing the need for mat time.

The team finishes their regular season at home against Desert Pines on Jan. 25 at 6 p.m.