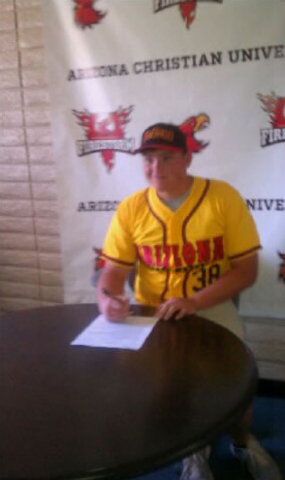 The first baseman has a hot bat and is hitting .344, his team is firmly guaranteed a playoff berth, and he signed with Arizona Christian University on Monday —life is sweet.

It’s a culmination of 10 years of playing baseball and a lot of hard work to keep up his grades. The signing brings Greene a $5,500 scholarship.

He had searched colleges all summer and fall in California and Iowa and thought he had found one but it fell through.

He worked closely with a college recruiting organization to get his name out there and a college in Arizona became interested in him.

“They found me through National Collegiate Scouting Association. I messaged the coach and we were e-mailing for a couple of weeks and then in January I went down there for a visit and a couple of games. I then had a personal workout with the head coach and he liked what he saw. I will be playing first base,” he said.

Arizona Christian University is a small school in Phoenix with a student enrollment of 600. The school plays in the Golden State Athletic Conference, which is a member of the NAIA.

Greene stands at 6 feet tall and 245 pounds and has the perfect size and arm strength to play at either first or third.

Throughout March he hit .500 or better and once league started he has hit .300 or better. His bat is something teams want along with a student who can function in college. Greene sports a 3.7 GPA at PVHS.

He said his only weakness is being able to hit the changeup.

“I can handle the fastball and I can read the curve and take it the other way. The only problem I have is hitting the changeup,” Greene said.

Greene is excited about going to Arizona and knows he can do well there. His plan is to major in communications with an emphasis in broadcasting.

Trojans Coach Brian Hayes was happy for Greene and his chance to play some college ball.

“We are excited to see Richard move on to play baseball at the next level, and wish him luck,” he said.