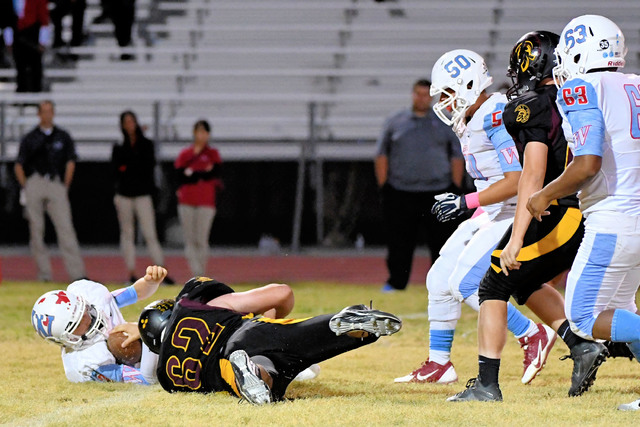 Jeremy Albertson gets a sack the Warriors quarterback. The defense was stellar all night long as the Trojans bottle up the Western offense. Peter Davis/ Special to the Pahrump Valley Times 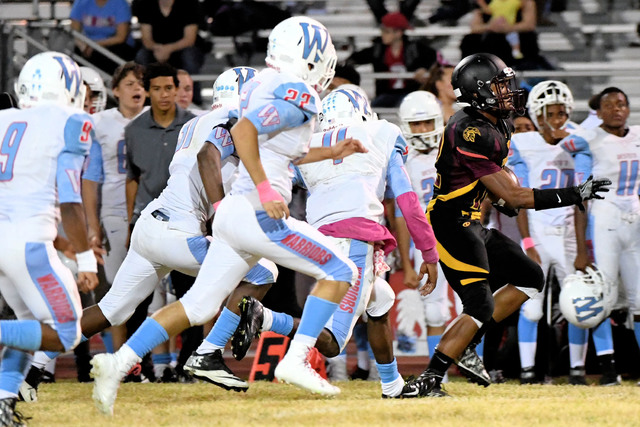 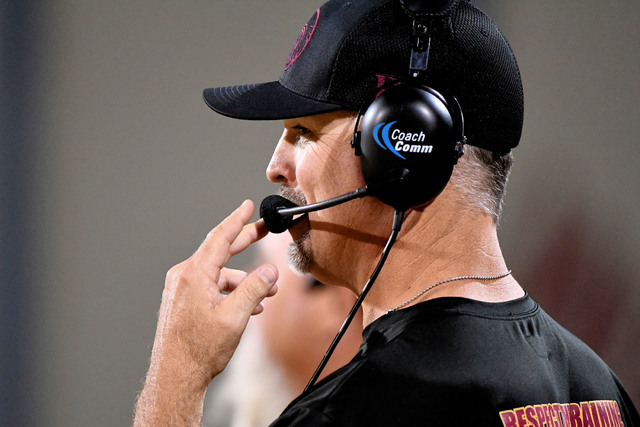 Trojans coach Joe Clayton can return Pahrump Valley to winning ways in football with a win against Mojave on this Friday which will give him a 6-3 record and insure a winning record for the season. The football program has not had a winning season since 1995 (5-4) under coach Gary Findley. Peter Davis/ Special to the Pahrump Valley Times

LAS VEGAS — The one thing the Trojans didn’t want to do last Friday was to overlook Western and lose. It was an easy thing to do since Western hadn’t won a football game since Nov. 5, 2010. Pahrump didn’t have to worry about that for long, as they scored three unanswered touchdowns in a row in the first half (18-0) and never looked back, winning 35-14.

“We worked harder than we have probably in the past month just simply to make a statement that we’re not overlooking anybody,” Trojans coach Joe Clayton said. “First of all, we told them not to overlook them. The way we worked all week told them we are not going in here lax.”

The first half was all Trojans (5-3 overall, 2-2 Class 3A Sunset). Pahrump’s scoring was led by running back Nico Velazquez and quarterback Parker Hart. Velazquez scored two TDs on a 10-yard and 15-yard run. Hart also had two rushing TDs.

Western did score on a Trojans mistake. Pahrump was driving with the ball on the Western 39-yard line. It was 2-12 when Jesse Dillon lost the ball and the Warriors (0-8, 0-4) recovered and returned the ball back for a TD to make it 18-6.

The Trojans scored one more TD in the half and it was on one of their longest drives of the season that started on their three-yard line. They then drove the ball the length of the field in 19 plays, eating over 10 minutes off the clock. Hart scored on a three-yard QB sneak. The Trojans then converted a two-pointer on a pass to Drew Walker to make it 26-6.

The most unusual play of the season occurred on the ensuing kickoff to the Warriors. Pahrump kicked the ball and for some reason Western players thought punt rules applied and they let the ball roll, but alert Trojans picked the ball up and ran with it. There were 40 seconds until halftime and they couldn’t take advantage of the opportunity. The Trojans took a 26-6 lead to the locker room.

In the third quarter, the Trojans took over on their 20-yard line and drove the ball 80 yards in 11 plays. On the last play of the drive, third and 11, Hart threw the ball to Cory Bergan in the end zone for the TD, to make the score 32-6. This would be Pahrump’s last TD of the game.

The Trojans did have another opportunity in the third. Western fumbled on their 44 and Pahrump Valley took over at the 50-yard line. But penalties reared their ugly head and forced the Trojans to kick a field goal from the 20 and that was the last score for the Trojans, which made it 35-6. The kick was a 37-yarder by Joey Sladek.

The third quarter was the last quarter the first string offense played for the Trojans. Clayton found time to put in some younger players.

Western scored their last touchdown on a 40-yard TD reception late in the fourth quarter with 2:58 remaining to make the score 35-14. Clayton said he tried to avoid that last score.

“The only time I was frustrated is when we put the younger kids into the game and they scored,” the coach said. “I was a little frustrated when the younger backs didn’t step up.”

Against the Warriors the Trojans controlled the clock by running the ball for 368 yards and played their game. They also threw for 24 yards.

“On offense we pounded the run,” he said to the team after the game. “I think we followed our blockers well.”

The Trojans offense did a good job in denying Western the ball, but the Trojans defense deserves credit too. Pahrump forced three punts in the first half and forced a fumble and two interceptions in the second.

“I just got back in my zone as fast as I can,” Bergan said. “We played good on defense and we’ve just got to keep the tempo up and be loud.”

Bergan plays both wide receiver and defensive back.

The last time Western had won a game was against Pahrump in 2010. Clayton was an assistant coach for the Trojans that year. That season Western finished 3-6, beating Sunrise Mountain (14-7), Sierra Vista (34-26) and Pahrump Valley (20-14).

For Clayton, beating Western puts his team in a great position, which he told his team after the game.

“Next Friday is a huge game for us,” the coach said to his team after the win. “It could not have played out any better with the schedule. We had Western away and Mojave at home. Mojave’s only win is against Western. That doesn’t mean anything. We are not overlooking anyone. We need to play solid and all. That win will put us as the third-place seed and we could play Chaparral again in the playoffs. You guys put yourselves in one heck of a position and that’s because of what you have done on the field and all season.”

That win will also secure a winning season for the Trojans, which will be the first one since 1995 when the team went 5-4 under coach Gary Findley.