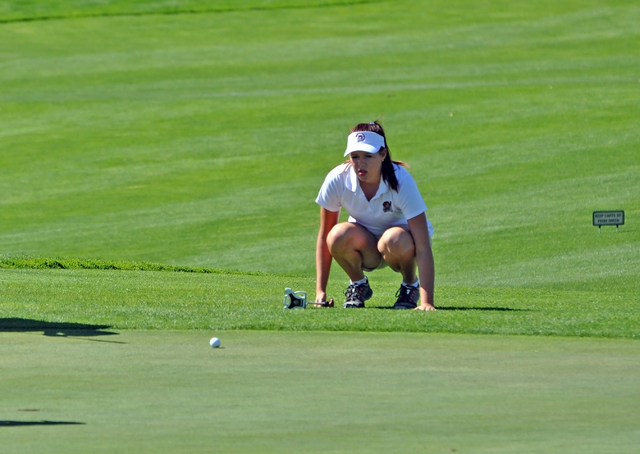 Horace Langford Jr. / Pahrump Valley Times Makalea Petrie eyeballs a putt at Mountain Falls at the last Sunset Match of the season. Petrie was the best girls golfer at state for the Trojans golf team, finishing 15th out of 46 golfers and carding a 204 in Elko. 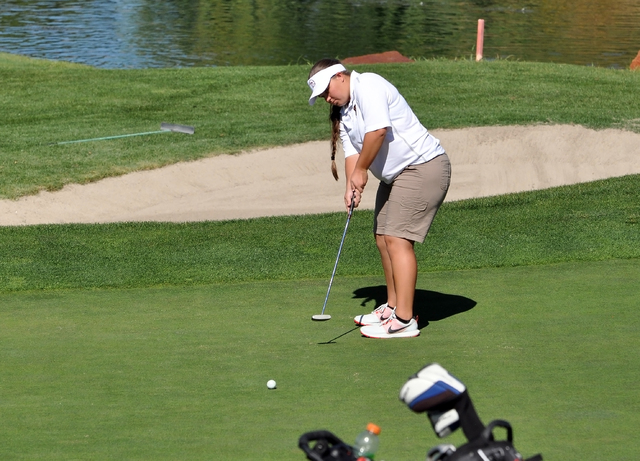 Horace Langford Jr. / Pahrump Valley Times Krista Toomer putts during the last Sunset League match of the year. She had her best outing of the year at regionals.

However you look at it, the Trojans girls golf team didn’t have it and it showed in their scores at the Class 3A Nevada State Girls Golf Championship. The Trojans finished in last place out of six teams, carding a 906 in Elko, at the Ruby View Golf Course on Monday and Tuesday.

Hopkins said he was not making excuses.

“Those are excuses, and like armpits, everyone has one of those,” he said.

Everything looked like roses prior to the Trojans starting the tournament. The team was coming around after carding a 385 at one of the tougher courses in the South, Falcon Ridge in Mesquite at the Southern Nevada Regional Tournament the week before. The team finished second to Boulder City, who carded a 361. It was their best round of golf all year.

But experience in tournament play will often define a team and the Trojans only had one golfer with state experience, Makalea Petrie, who went last year as a freshman.

“Unfortunately, not being in a state tournament as a team hurt us,” the coach said. “This course is not as hard as what we had the Southern Regional Tournament at Falcon Ridge. Here it’s wide open. There were no real big hazards.”

The 906 score and sixth place finish out of six teams has Hopkins searching for answers. He did say the girls were not used the greens.

“The greens here are a lot faster than the greens at Mountain Falls,” he said. “And it was colder. The temperature was around 45 degrees during tournament time and the kids might not have been used to golfing while wearing a coat. Whatever the reason, I was disappointed in our performance and so were the girls.”

But despite his negative assessment of his team, Hopkins still managed to turn it around and find a glass half full.

“Well you’ve got to look at next year,” he said. “Next year four of our girls will have state experience.”

Hopkins said Petrie should improve during the summer if she continues to practice her chipping and putting. He really likes her long ball but her short game needs a lot of improvement.

The individual gold medal was won by Boulder City’s Lani Potter, who carded a 147. She was followed by Annika Criss of Elko (167) and Carolyn Lemon of Western (176).