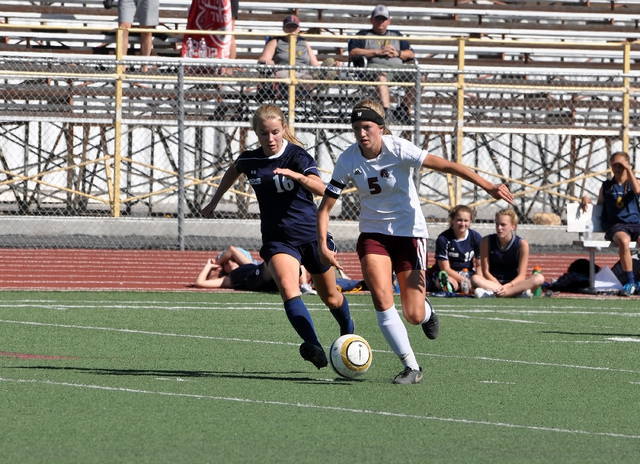 Horace Langford Jr./Pahrump Valley Times Sydney Dennis takes the ball in to scoring territory before she scores her first goal of the game against Boulder City on Wednesday. 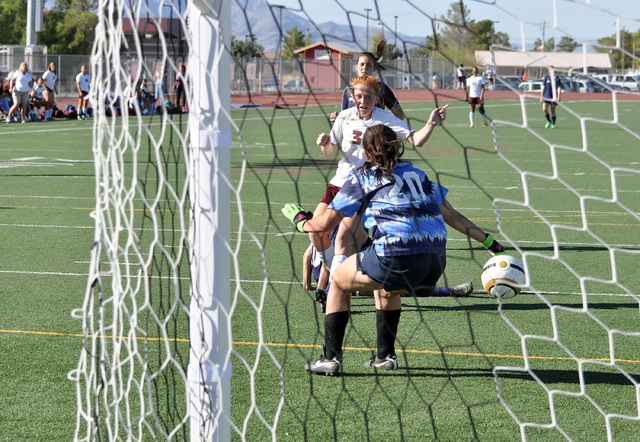 Horace Langford Jr./Pahrump Valley Times Kaitlyn Carrington scores her third goal of the game against the Eagles on Wednesday in front of a home crowd.

The Trojans (6-3 overall, Sunset League) took awhile to warm up.

“We were slow to start,” Trojans coach Julie Carrington said. “After they scored the first goal, then we started to see more offensive movement.”

The Eagles drew first blood within the first five minutes of the game for their only goal of the game.

Pahrump then answered with their first goal about 15 minutes into the game with a Dennis shot. Two more goals followed by Carrington and then Dennis again.

Dennis now has five goals on the season and Carrington has four.

In the second half, the Trojans dominated, scoring five more goals. The Eagles (1-3, Sunrise League) only had one shot on goal in the 40-minute half.

Grace Gundacker and Makenzie Lunato scored the other two goals for Pahrump. Carrington, Gundacker and Dennis also each had an assist.

Carrington told her girls after the game that the passing was “awesome.”

“I didn’t think we were ready for league until this game,” Carrington said.