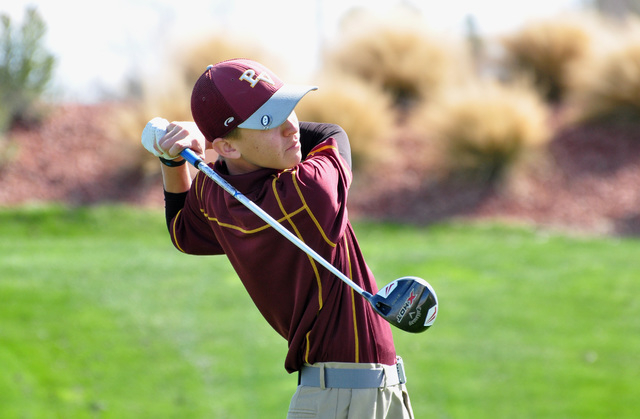 In the first round Coach Bob Hopkins said prior to Wednesday’s match that both his team and Boulder didn’t play too well at Palm Valley on Tuesday.

“We are 7 strokes behind Boulder City for second place,” he said. “So hopefully we improve on Wednesday.”

Pahrump scored a 446 in the first round. Faith Lutheran led the tourney with a 385 and Boulder City was second with a 439.

Sophomore Austen Ancell led his team on the first day with an 8-above par 80. He was followed by junior Derek Moore’s 88, junior Canen Hastings’ 91, junior Kelby Lindberg’s 92 and junior Mike Hildebrand’s 95. Junior Drake Asuncion came in with a 99.

On Wednesday Hopkins said things were not any better for the team shot a 464.

“we shot our worst round of the year on Wednesday,” the coach said. “Hopefully we will play better at State.”

Hopkins said he really didn’t understand why his boys shot so poorly.

“We played both courses this year,” he said. “It must be just nerves, I guess. Derek had not played Palm Valley because when we played Desert Oasis it was just a dual and he didn’t go. Austen shot 73 at Palm Valley in that dual.”

Pahrump even had the momentum going into the tournament at Siena last Wednesday, when they carded a 427 at the Sunset League match at Siena Golf Course in Las Vegas.

In that match the boys were led by Ancell, who carded a 1-under par 71 and finished in first place.

Hopkins is still looking forward to the team playing at the state tournament in Truckee, California on Monday. He said the weather might be a factor. It will be cooler than Pahrump. The high in Truckee will be 63 on Monday and 59 on Tuesday.

Hopkins said Faith Lutheran will be the favorite to win. The coach is hoping Ancell plays better so he can medal.