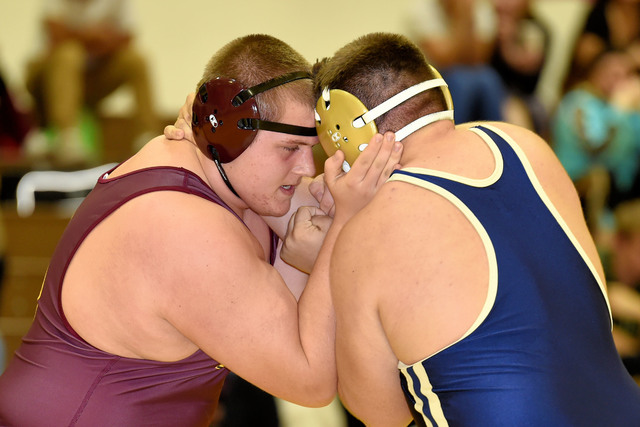 Sophomore Zach Trieb (285 pounds) is still learning with every match he wrestles. Trojans coach Craig Rieger believes he just needs some more time to develop and said Trieb has great potential and a lot of good athletic ability. Peter Davis / Special to the Pahrump Valley Times 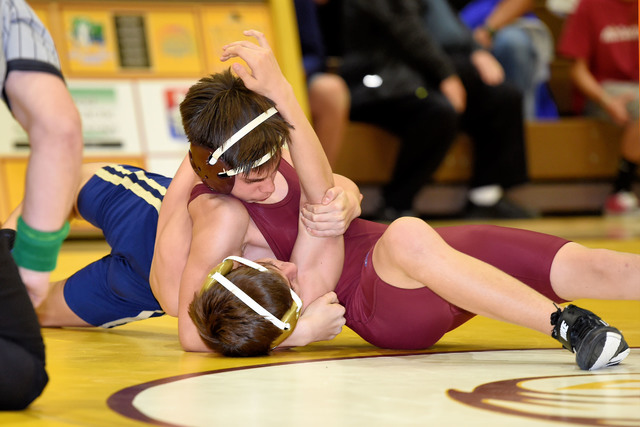 Freshman Wyatt Platt (113 pounds) gets a pin against Cheyenne on Wednesday night. Peter Davis / Special to the Pahrump Valley Times 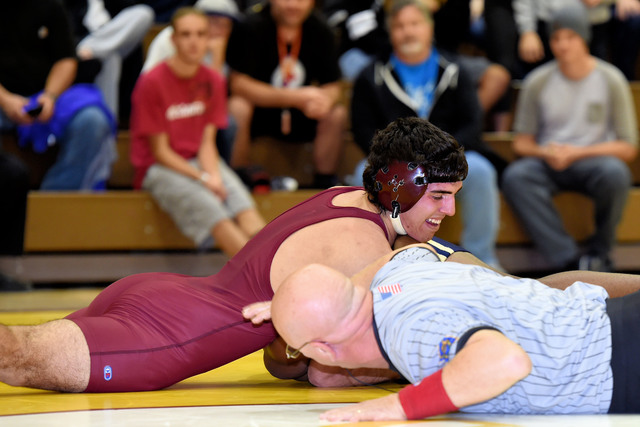 Senior Garrett Monje (170 pounds) pins his opponent from Cheyenne on Wednesday night. Monje helped the Trojans to a 51-27 win over their league rivals. Peter Davis / Special to the Pahrump Valley Times

The Trojans wrestlers ran away with their first home wrestling match of the season, 51-27 against Cheyenne.

Pahrump (3-0 Sunset League) looked sluggish coming off the break, but don’t tell that to the Cheyenne (0-3) wrestling coach. His team suffered eight losses in a row before they finally got two pins in the end.

Trojans wrestling coach Craig Rieger has said all season long his team is inexperienced and learning. He got a win last night and he will take them any way he can get them.

“We haven’t competed in two and a half weeks and all we have done is practiced and practiced,” Rieger said. “And it showed. There is no substitution for live competition. Some of our boys were tired. We got experience tonight and for us right now we will need it because there will be a lot of wrestling coming up here.”

Senior Garrett Monje used his experience to get his pin in the second round in one of the more exciting matches of the evening.

“I have learned over the years to be confident,” he said. “Coach is always talking about confidence and trust in your conditioning. Just go out there and wrestle. That’s simple wrestling. That’s all we have, nothing about it is fancy. I just learned to trust my conditioning and have confidence and just go out and do my thing.”

Monje in his match looked like he was testing his opponent in the first round and trying to get a feel for what he was about, but what he was doing was wearing him out.

“I wrestled him before and I beat him last year,” Monje said. “I wasn’t going out there and underestimating him. I knew what he was about. He was 2-0 in league and I went with my game plan and was heavy on the head, to wear him out. In the second period he was dog tired and he took an ugly shot and I just went with it.”

The Trojans wrestle this weekend at the Bulldog Grappler at Centennial High School, with action starting at 4:30 p.m. Friday and at 9:30 a.m. on Saturday.

Then on Tuesday night, Pahrump hosts Mojave (3-0) in what could be for the league title as the two undefeated in league teams go at it at 6 p.m.