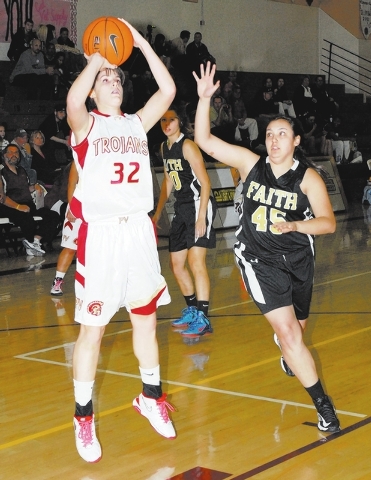 The girls Trojans basketball team is hoping to start their season with a bang as the potential for a winning season looks promising. With some strong players returning to the team as well as a strong freshman class, head varsity coach Jennifer Hagstrom is enthusiastic about the upcoming season.

Hagstrom said, “We have a really good freshman class. We have potential to be really good. We are actually going to be one of the taller teams in the league this year.”

Pahrump statistically the last few seasons has been rather short, not giving the team much opportunity to power the ball inside as they compete against teams with several six foot players. The new height should give the Trojans better scoring opportunities.

Last year the team finished in last place with a 5-19 overall record and a 0-10 league record.

“We can focus on getting the ball inside. We have been really good on defense the last couple of years. Teams didn’t really score big numbers against us. We have an advantage because almost everyone last year is returning,” Hagstrom said.

Returning to the team as a junior this year is post player Shayla Dance who has started for Hagstrom the last two years and has improved a lot according to Hagstrom.

Hagstrom said, “Shayla has improved so much. She has gotten a ton more aggressive and is coming in looking really strong.”

Dance is also excited about the upcoming season.

“I’m looking forward to this season and scoring a lot of points and focusing on getting the ball inside,” she said.

Despite being young, the team has a lot more experience as the majority of the team played for Hagstrom last year. Other assets for the team this year are juniors Alyssa Murphy and Taylor Kingsley.

Murphy is a tough guard and hustles like no other player. She also has good speed and decent ball handling skills.

“Murphy’s skills have gotten a lot better and Kingsley can shoot the three. It has been a while since we have had a girl who could shoot the three,” the coach said.

The freshman class may take some time to get in the swing of things, but both Hagstrom and Dance are happy with their progress.

“They are working hard and really impressing me in practice,” Hagstrom said.

Dance agreed with Hagstrom’s statements, “They are practicing hard and they have the skills to play at the varsity level.”

There are three freshman on the varsity team: Alyssa Begin, Maddy Pereira and Jill Smith.

The Trojans kick off their season with a tournament at Del Sol on November 29.