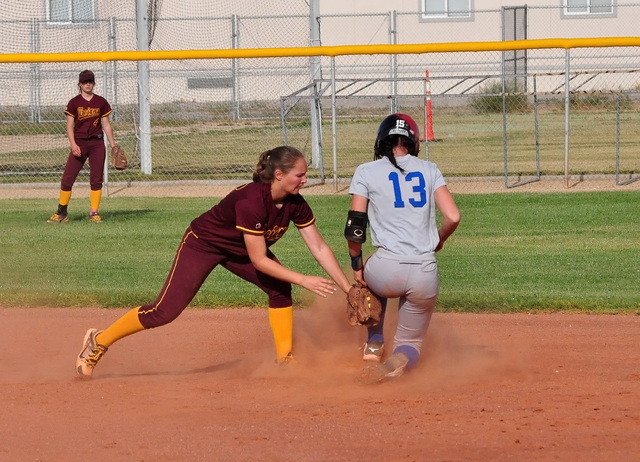 The Lady Trojans softball team went farther than they expected to go, according to Trojans coach Eli Armendariz.

The team had been hampered by two major injuries, junior Jill Smith and junior Jordan Egan. Smith injured her knee during basketball season and Egan went out with a shoulder injury, which also required surgery.

The team completed their season at the regional playoffs last week where they went 1-2, losing to Boulder City 10-3, but on the following day the team beat Sunrise Mountain 4-1.

The victory meant they had to play Sierra Vista on the following day, which they lost 4-0 and ended their playoff run.

Despite the loss, Armendariz characterized the year as “successful”because the team had to replace the two injured players and did.

“We had holes to fill and they were filled by underclassmen who performed above expectations,” the coach said. “Down two key players and we did well, even without Jordan’s big bat.”

The Trojans finished the year 17-12 overall with a fourth-place finish in the Sunset League.

Next year Armendariz feels his team could go to state, barring any major injuries.

“We will lose five seniors but we still will have nine returning lettermen,” he said.

The two teams that will represent Southern Division I-A at state will be Spring Valley and Boulder City.