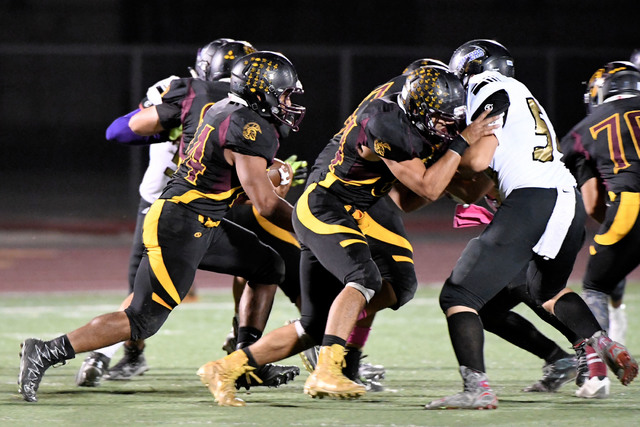 Peter Davis / Special to the Pahrump Valley Times Aaron Fuentes looks for running space during last week’s game against Sunrise Mountain, which became the Trojans fourth victory of the year.

Trojans vs Western: Pahrump away going for their fifth win of the season

This week the Trojans travel to Western. The Warriors (0-7 overall, 0-3 Sunset League) have not won all year long and probably won’t, but they can’t be overlooked. This is a fear that coaches have when playing a team with a losing record.

“The boys have worked really hard this week not to overlook Western, and they realize the opportunity that lies ahead,” Trojans coach Joe Clayton said.

“We have had a great week of practice and are ready to travel well this week. Like always, we are following our philosophy of controlling the ball, taking care of the ball and being relentless on defense.”

Pahrump (4-3, 1-2) is coming off a league victory where they edged out Sunrise Mountain, 35-33. It was a four-quarter game that went down to the wire.

Pahrump ran the ball for 240 yards behind the usual committee of runners. Drew Walker led the committee with 11 attempts for 125 yards, Nico Velazquez was second with eight attempts for 79 yards and Jesse Dillon had seven attempts for 36 yards.

Pahrump’s offense didn’t start going until the third quarter and ran the whole half.

Against a soft defense like Western, the Trojans should run all over them.

Western’s best game this year was against Del Sol, where they scored the most points, 12 and had the most offensive yards, 341, but still managed to lose 24-12. The situation at Western is so bad that the team hasn’t won on the field since 2010.

Their offense runs a pro set and has been known to break a play now and then. Roger Harrison is their best back.

His best game was against Del Sol, where he had 218-yards rushing. Most of the teams though have kept Harrison quiet since that game and he has not broken 100 yards since.

The Warriors will break plays against Pahrump, but they won’t be able to sustain long drives and put it together for the win.