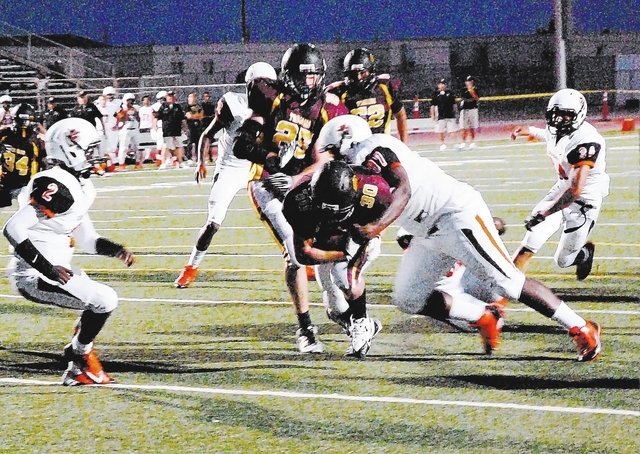 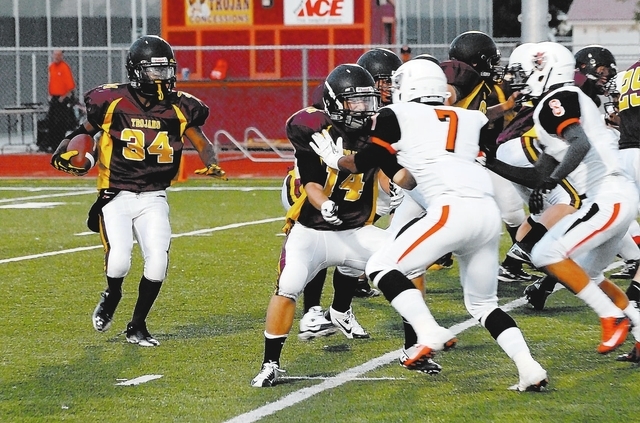 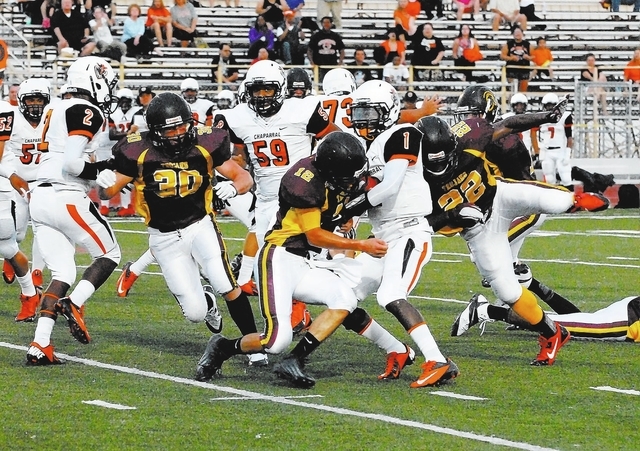 The Trojans came into the game against the Chaparral Cowboys on Friday night as the underdogs. Las Vegas Sun’s sportswriters, Ray Brewer and Case Keefer both picked Pahrump to lose. Who wouldn’t, the Trojans had not won a home opener in 5 years. The last one was in 2008 against Mountain View Christian when the Trojans were coached by Leo Verzilli with Joe Clayton as the offensive coordinator.

Troy surprised everyone by soundly beating the Cowboys 28-6.

Chaparral scored first on the run with their first possession to take a 6-0 lead after failing to convert the extra point.

Pahrump’s running game took a bit to warm up, but when it did it went full bore and Chaparral could not stop it. The Trojans line dominated the middle late in the game allowing the Trojans to march down the field at will.

Senior Trojans fullback Scott Maughan was responsible for 120 yards, nearly half the Pahrump offense, which was 246 yards total. He scored two of three touchdowns for the Trojans. He was like a machine, tearing up the middle of the field with five-to-six-yard bursts at a time.

“I felt great,” he said. “You give me the ball and I will take care of it. It was working and the line was blocking for me. I felt great and I think this win gives us momentum and will carry us through the season. We worked all summer obviously, now it’s paying off and if everyone will work hard and have a good mindset we will keep winning.”

The Trojans scored on their second possession in the second quarter. PVHS took over on the 45-yard line on downs and drove to the 15 of Chaparral. Maughan took it in moments later for the first Trojans TD of the year.

The Trojans blew a good scoring opportunity at the end of the second quarter. They had the ball first and goal and ran four straight running plays but could not punch it in.

Coach Joe Clayton was asked if he second-guessed himself and felt he should have gone to the air.

The Trojans took a 6-6 tie into the locker room at halftime.

Clayton believed he really did not have to make any adjustments at the half. He was pleased with the way Troy ran the ball.

“Why go away from running the ball if you can, and that is exactly what we did,” he said. “I thought we might as well keep giving the ball to Scotty. We are hoping he gets 1,000 yards this year and he showed it tonight. We just have to give it to our horse.”

The coach also felt the Cowboys were not able to make adequate adjustments to his offense at the half.

“They did make a huge adjustment and knew we were running that jet, but for whatever reason we made an adjustment and they adjusted out of it. That helped us and we were successful. They were more concerned with Scotty so they took out a perimeter guy and they left the middle open,” Clayton said.

On the first drive of the second half, Troy took the ball to the goal line, fed it to Maughan and he drove the ball in for his second TD of the night.

Pahrump then broke the game wide open when they recovered a fumble by Chaparral on their first possession of the second half. The ball was fumbled on the Cowboy 40-yard line and Devontae Brown returned the fumble 41 yards for 6 points. Troy went up 18-6 after missing the conversion.

Some fans at the game criticized Trojans coaches for not mixing up the plays better. Trojans announcer Mike Colucci explained it this way, “It’s important for the team to do a few things really well rather than do a few things mediocre.

Two or three people said the Trojans are one-dimensional. If it ain’t broke don’t fix it. They can say whatever they want, the bottom line is the outcome of the game. If the run is there why not run it all night.”

The Trojans passing game consisted of one long pass, when AJ Segura connected with Jeremiah England in the first half for a 31-yard strike. Other than that, the Trojans kept the ball on the ground. In the fourth quarter, the solid running game allowed the team to eat up minutes on the clock. They ate up a good eight minutes in the opening drive of the fourth which saw senior quarterback Segura take the team over 60 yards to score. Segura marched down the field, which set up a two-yard keeper run to the end zone for the last touchdown of the game.

Segura was not only instrumental on the scoring and keeping the offense going, he also helped lead the defense in tackles with eight as a safety. Linebacker Sam Tucsnak also had 10 tackles.

Segura said he had no problem going both ways.

“I made a mistake and did not water enough throughout the day. Being a quarterback for the past three years, I have never been in non-stop. It is just something I have to learn from and will have to chug water all day. You can kind of feel us dominating, and we never have been in this position before, but we knew how to put it away. You felt it was our game,” he said.

Clayton was excited about the win. “I am ecstatic,” he said. “It’s been a long time coming and I have been part of the program for years. I knew all along if the kids put the time in that they would get it done.”

The team’s next game is Sept. 7 at 7 p.m. at home against Desert Pines.