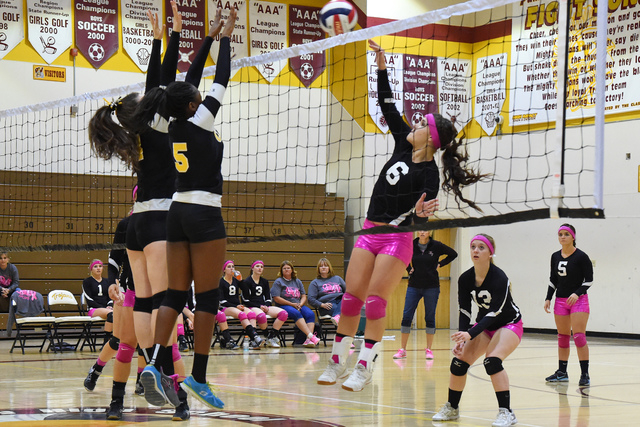 The win for Pahrump against the Chargers (2-11, 2-10) was the second win against that club of the season and the second win in a row. The Trojans finish its last two games of the regular season next week.

During the Mojave match, the first and third sets were consistently upbeat, with the Trojan Ladies gaining points steadily throughout the sets. In the second set, the Ladies gained steadily until about 22 points, with the Rattlers then gaining 7 or 8 points to almost catch the Trojans.

Trojan Coach Jill Harris said her team had lost to the Rattlers in a non-conference tournament last Friday. Things were different on Tuesday.

“We came out attacking tonight. They let any point losses roll off and came right back attacking. [The Rattlers] are notorious for waiting for us to make a mistake and then taking advantage of it. As long as the girls keep attacking, it makes it much harder for them to come back,” Harris said. “This game tonight, locks us into post-season, we’re not guaranteed the play-offs. If the Rattlers had won tonight we would have to beat Cheyenne to get to the playoffs.”

Harris said her girls are pumped up and are practicing hard and with intensity.

“Tonight the girls were fired up. They were ready to play. We had a separate gym for warm-ups and that allows us to have our girls practice six-on-six. They play six-on-six really well. They play it competitively and they work hard at it. They warm up so much better that way.”