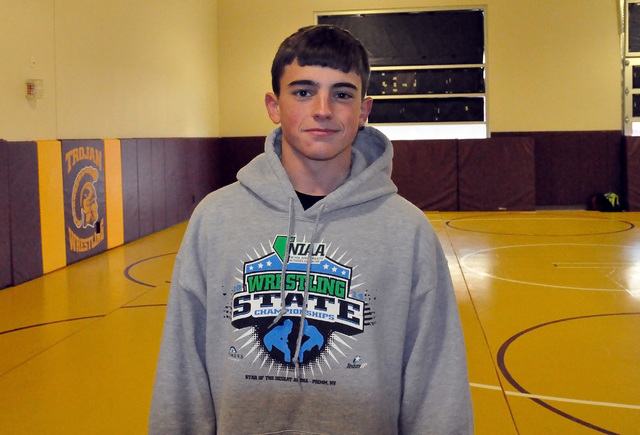 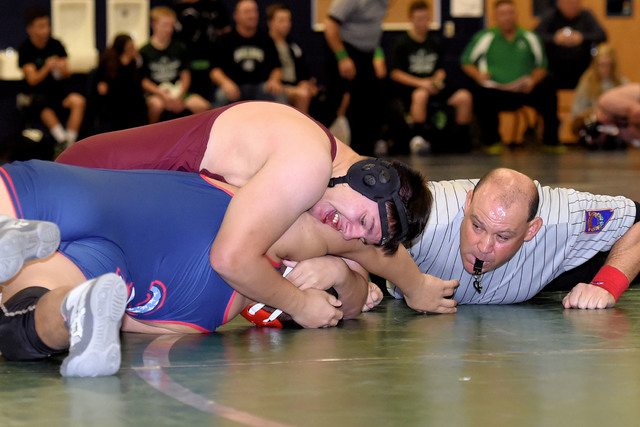 Peter Davis / Special to the Pahrump Valley Times Christain Monje at 195 pounds went 4-0 at the Spring Valley Duals, seen above bringing the hammer down on his opponent. 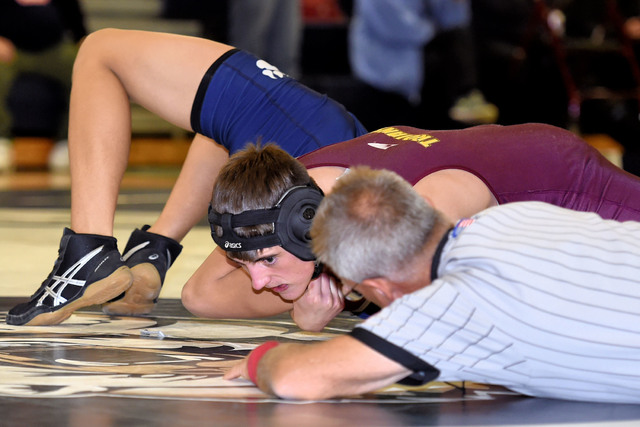 Peter Davis / Special to the Pahrump Valley Times Tristan Maughan takes his opponent down on Saturday at the Spring Valley Duals. The Trojans didn't win any matches out of four, but were close and showed some promise.

Trojans grapplers went to one of the toughest duals of the year at Spring Valley on Saturday. Although they didn’t win a match, going 0-4, the team showed some promise.

The Trojans were missing five wrestlers going into the match and so had to forfeit those points.

“I could have easily brought up five wrestlers from the junior varsity team,” Trojans coach Craig Rieger said. “But the JV team had a match at Foothill and so I left things as they were.”

Rieger said with three of his wrestlers that eligibility was the problem.

“That hurt us and we still don’t have a 106-pounder,” he said. “Dustin Riley got hurt and so he was out at 152. He is wrestling really well but went to the hospital and he took a week off, which was fine.”

So the bottom line is when the Trojans don’t fill all 14 weight classes, they have to forfeit the ones they don’t fill and those points counted against them.

“We had four close matches,” the coach said.

And if Pahrump had those five wrestlers, who knows what the outcome would have been.

“What’s neat is we had some guys step up,” Rieger said.

“These guys have a lot of heart,” Rieger said. “They would be behind in their match and they would come back and win.”

Tristan Maughan was the wrestler of the week because the coach said he came down in weight and won four solid matches.

“I did well because I was much more confident this tournament,” Maughan said. “I have started to mature and just do better.”