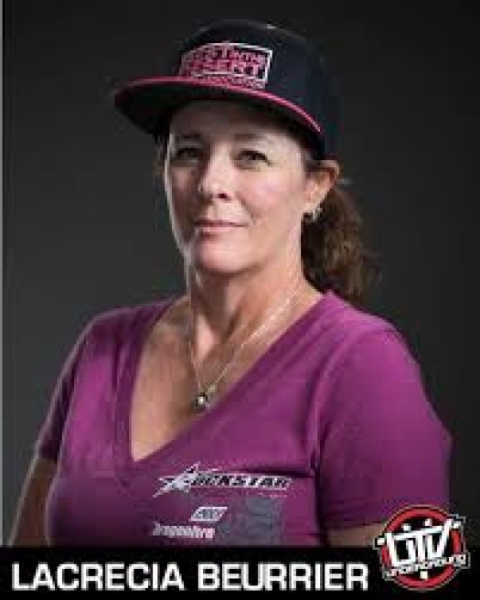 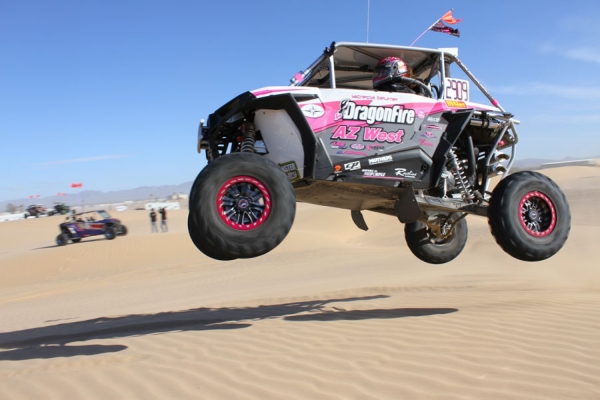 Lacrecia Beurrier may not be the fastest overall, but she is usually the fastest in her class. And she is the only woman in her race class, UTV Unlimited Pro, in Friday’s General Tire Vegas to Reno race.

This race is the longest off-road race in the country and will start in Beatty at first light at 5:30 a.m.

There are maybe 20 other women, including co-drivers, out of 330 racers at the Vegas to Reno race. To Beurrier the reasons are many.

“There are not too many woman like me,” she said laughing. “But mostly it’s probably because it’s tough to be taken seriously in this sport by men.”

The Polaris racer said she pushes herself to the limit.

“I push as hard as I can and it’s fun,” she said. “Racing off-road is different than racing on the track and that is another reason few females do it. It’s hard and tiring and you have to be able to fix your own vehicle. I am sure this is why more women do short courses.”

She recalled one instance where she rolled her UTV.

“I was upside down in my vehicle with fuel leaking and I had to fix a fuel line,” she said. “There have also been times where I had to fix belts and tires too.”

Beurrier races for Dragonfire Racing and is sponsored by Polaris. She said she started racing off-road in 2008 at a powder puff off-road race in Barstow. At the time she raced a Rhino.

Beurrier has come a long way since then. Due to her successes, Polaris chose to sponsor her this year. She got her third Mint 400 win this year and she was first at the Silver State 300 in her class also this year. She even has won the Baja 1000.

Her goal in the Vegas to Reno race this year is just to finish.

“I only need to finish this year and I will win the class championship because we accumulated so many points this year,” she said.

She attributes her wins to her crew chief, her husband Eric, who taught her everything about racing and is her biggest mentor.

“When I am racing, it is my husband’s voice in my head giving me advice,” Beurrier said. ” We are careful preppers and I am a more conservative driver than most men. I know that I have to bring the car home and I race differently than most. I don’t take a lot of chances, which means I am not the fastest out there, but I finish.”

Beurrier said guys are crazy and like to ride the throttle too much.

This year Beurrier will race all the Best in the Desert races (there are six) but she also has been known to race SNORE, Southern Nevada Off-Road Enthusiasts.

According to Casey Folks, the organizer of Vegas to Reno and the President of BITD, the Vegas to Reno course will be a rough one this year due to storms.

“I just drove the course and found in some places that the roads had been washed away for as much as 100 feet in some places,” Folks said. “But crews are patching up the course as we speak and we should have a race on Friday, just slower.”

“It was a little like that last year,” she said. “This means my co-driver, who has to watch the course and the GPS will just have a tough job this year, keeping us free from hazards.”

The UTV pro plans on racing most of the 530 miles.

The Polaris UTV has 110 horsepower, which is average for her. Her class is unlimited though and so some drivers have 150 horsepower at their disposal, but this doesn’t worry Beurrier.

“Again, this race is not about speed,” Beurrier said. “Yes, there are some places I can open it up to 85 miles per hour, but those places are limited. This course is not like the dry lake beds in the Mint 400.”

When asked if she would change classes, she replied, “It would be fun to race the 7200 class but right now I plan on staying where the money is.”

When Beurrier is not racing, she is a charge nurse in an emergency room so you can see she enjoys the adrenaline rush. She has been doing that for 16 years and currently lives in Lake Havasu City in Arizona. She has raised one son who is 14 and loves to crew her races.

“My son is a good mechanic and prefers to fix vehicles rather than race them,” she said.