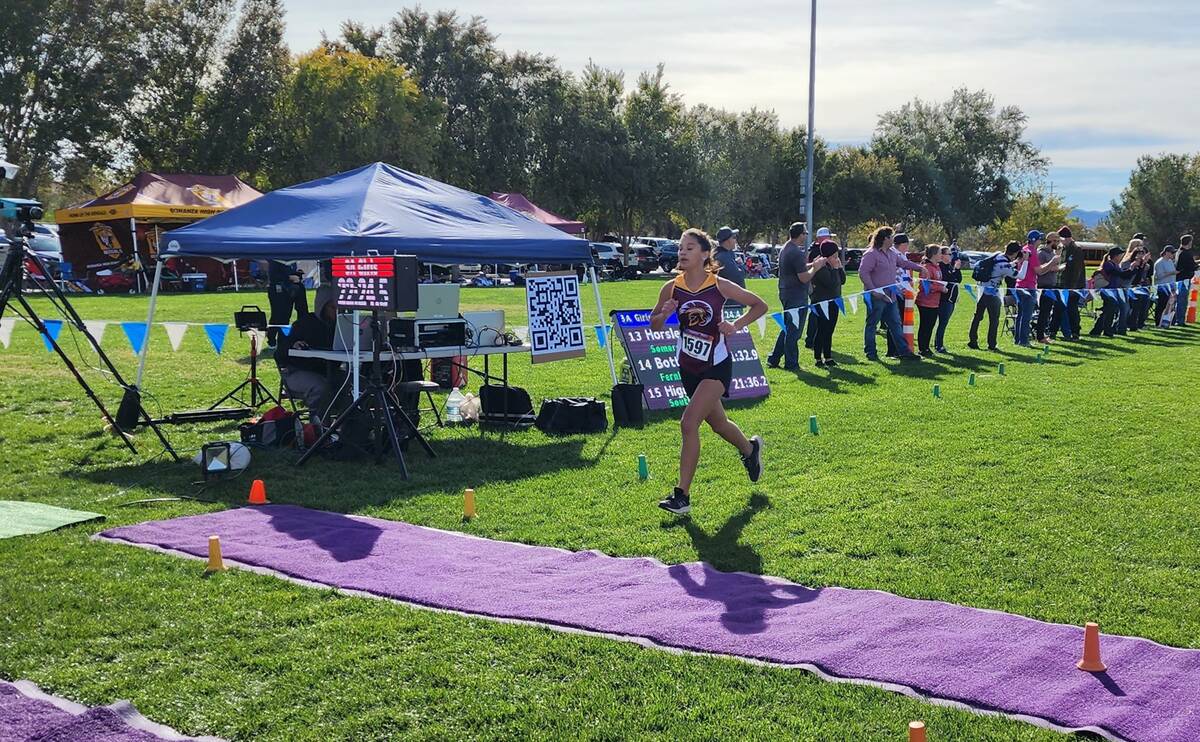 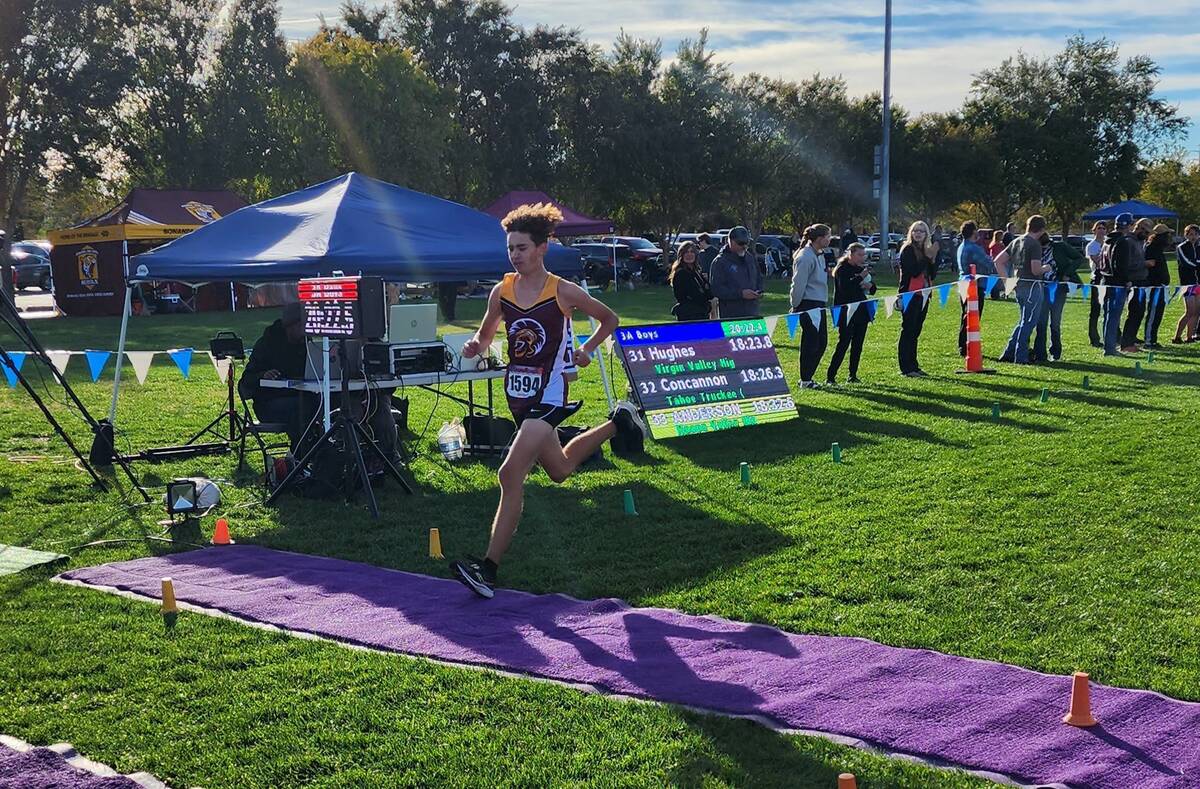 Danny Smyth/Pahrump Valley Times Antonio Veloz finished with a time of 20:22 at the Nevada 3A state cross-country race in Boulder City. He had the third fastest time for the Pahrump Valley Trojans. 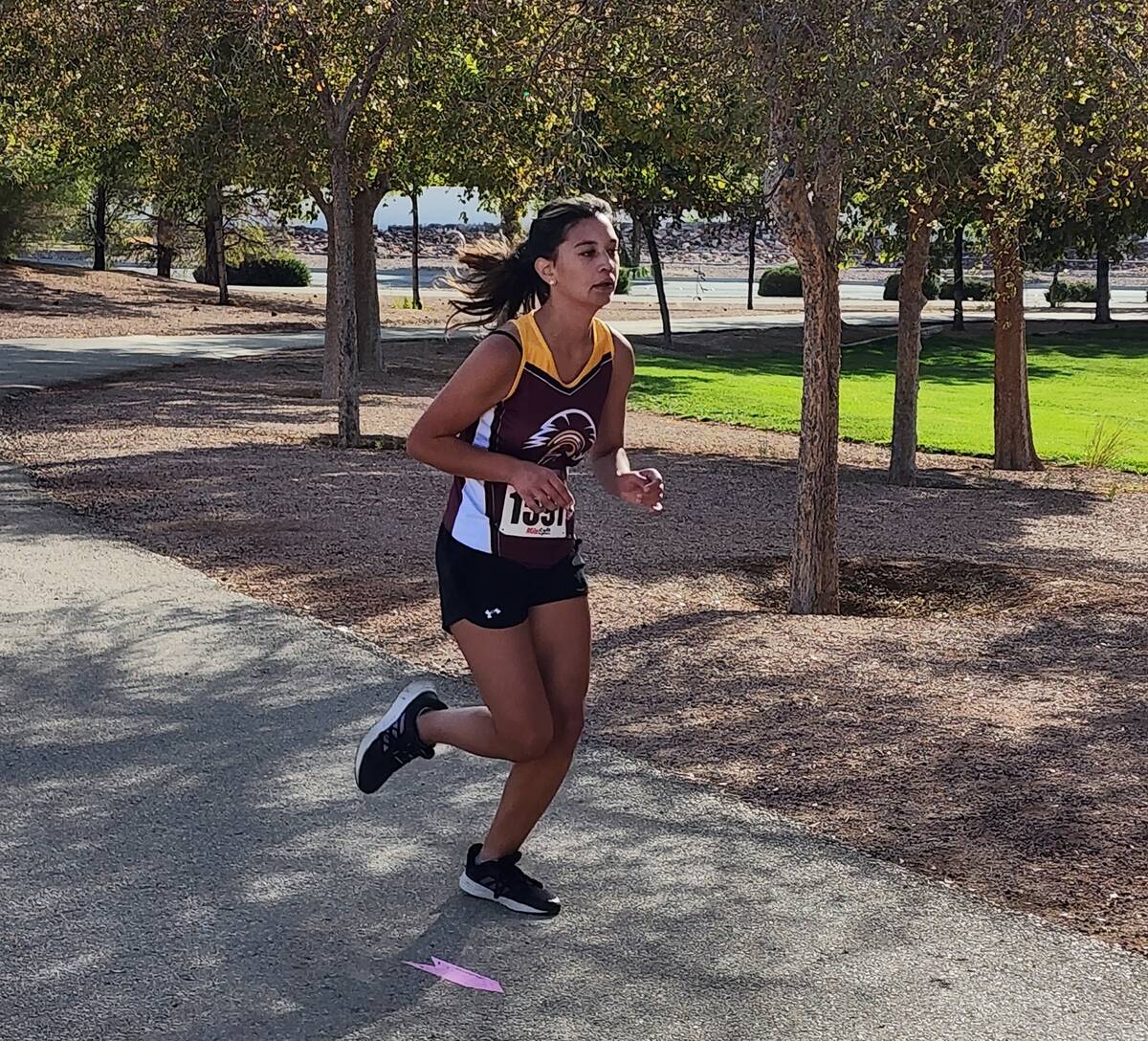 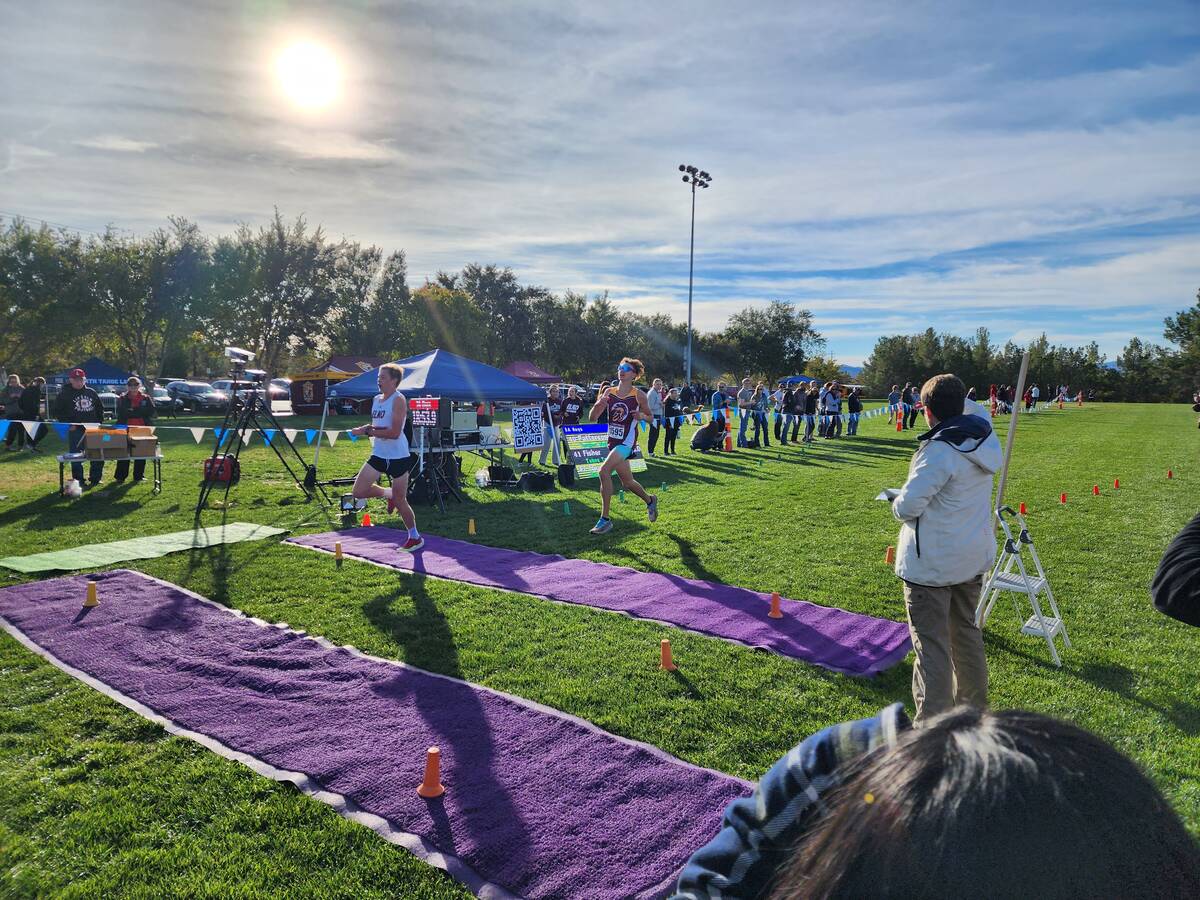 Danny Smyth/Pahrump Valley Times Freshman Aydon Veloz ran the fastest time for the Pahrump Valley Trojans, finishing with a time of 18:54 in the 3A cross-country race at Veterans' Memorial Park in Boulder City on Saturday, Nov. 5. 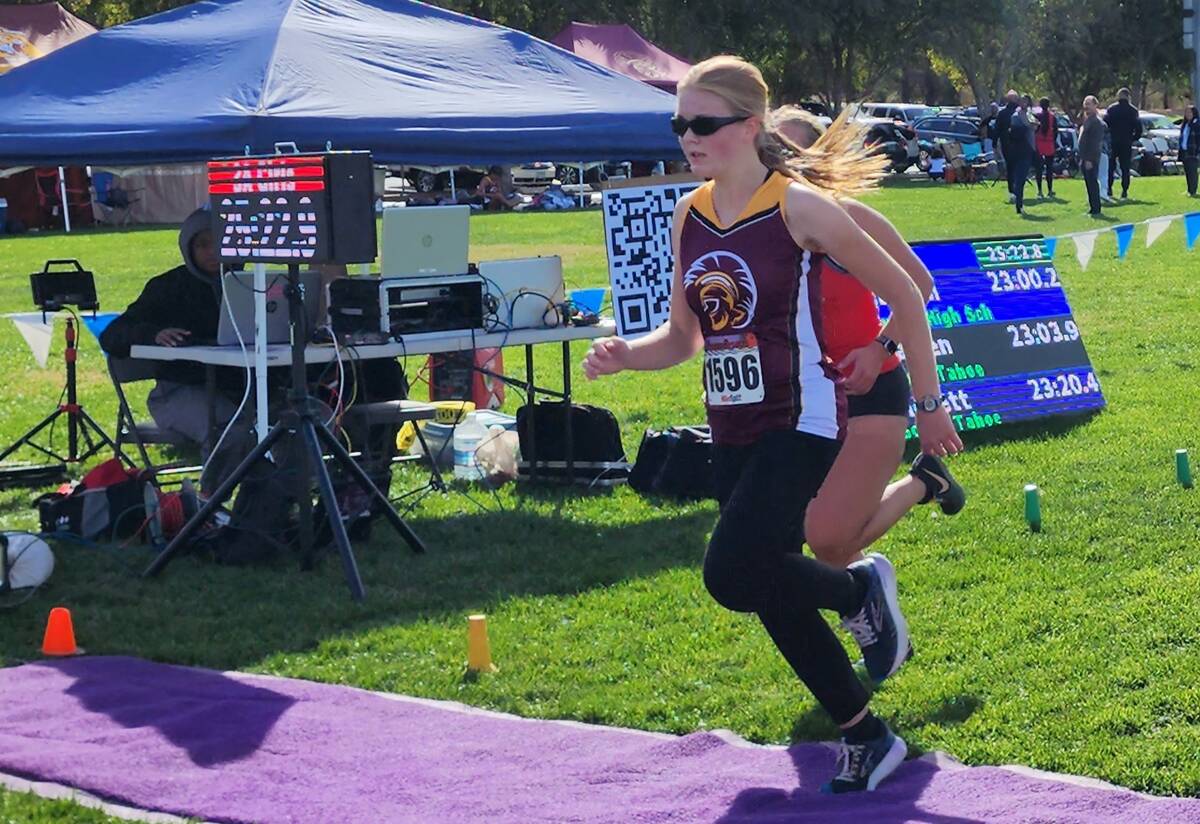 Danny Smyth/Pahrump Valley Times Freshman Savannah Thompson finished in 50th place at the Nevada 3A state cross-country event with a time of 25:22. 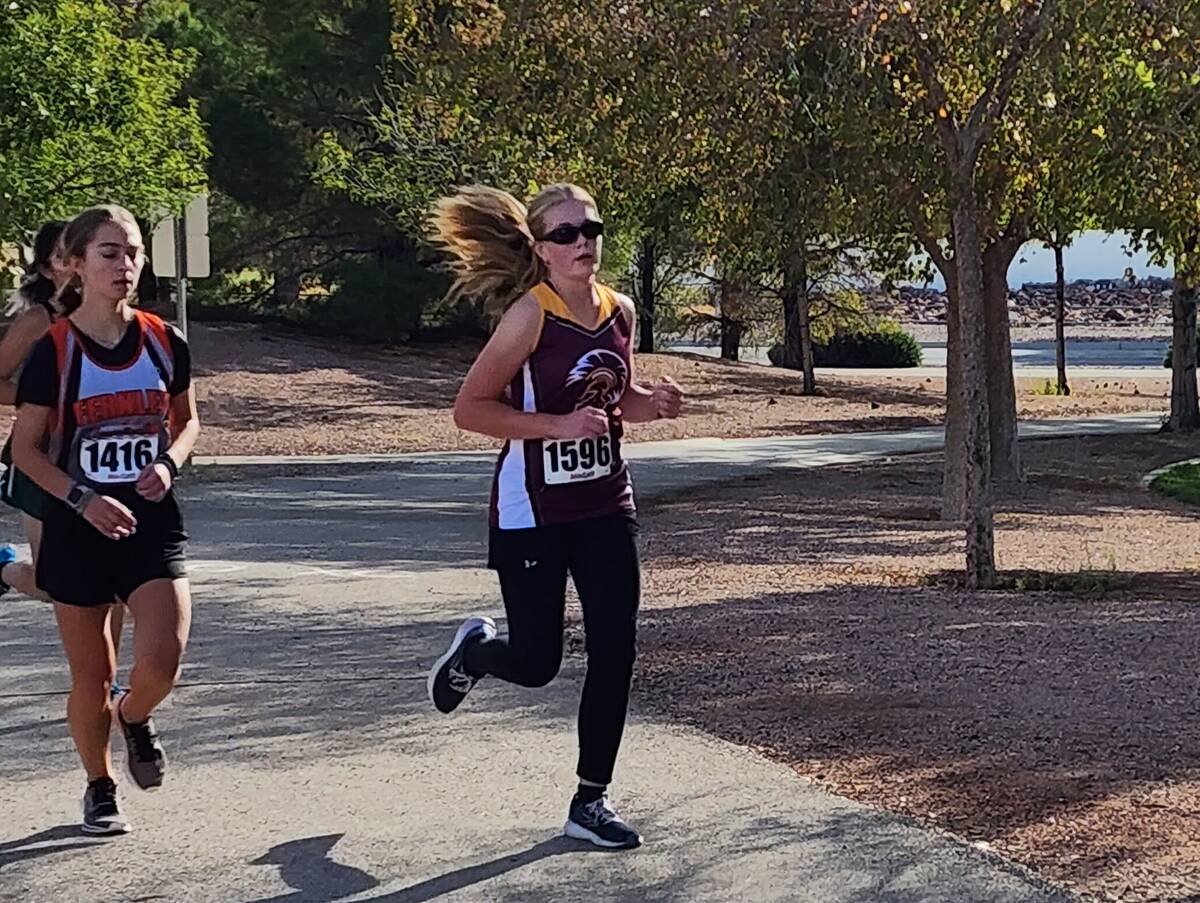 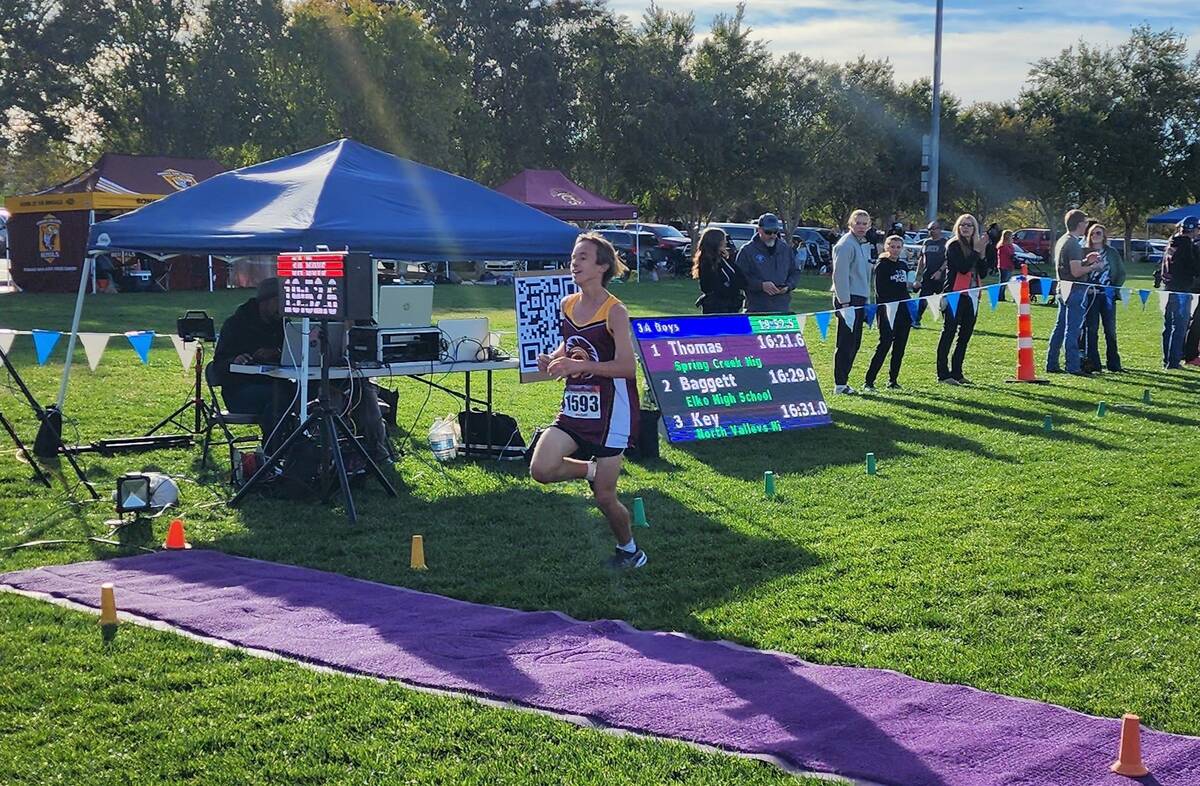 Danny Smyth/Pahrump Valley Times Timothy Stutzman, finishing with the second fastest time for the Trojans, registered a time of 19:52 at the 3A state race. He ended the race in 55th place overall. 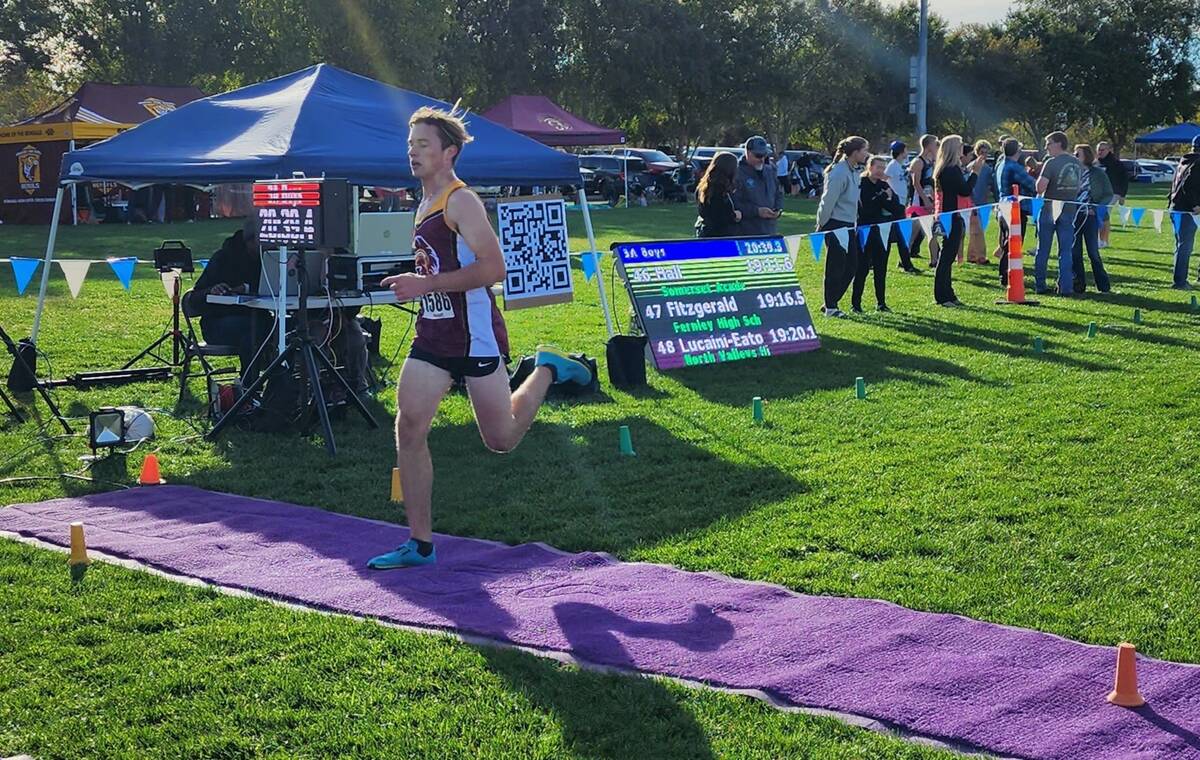 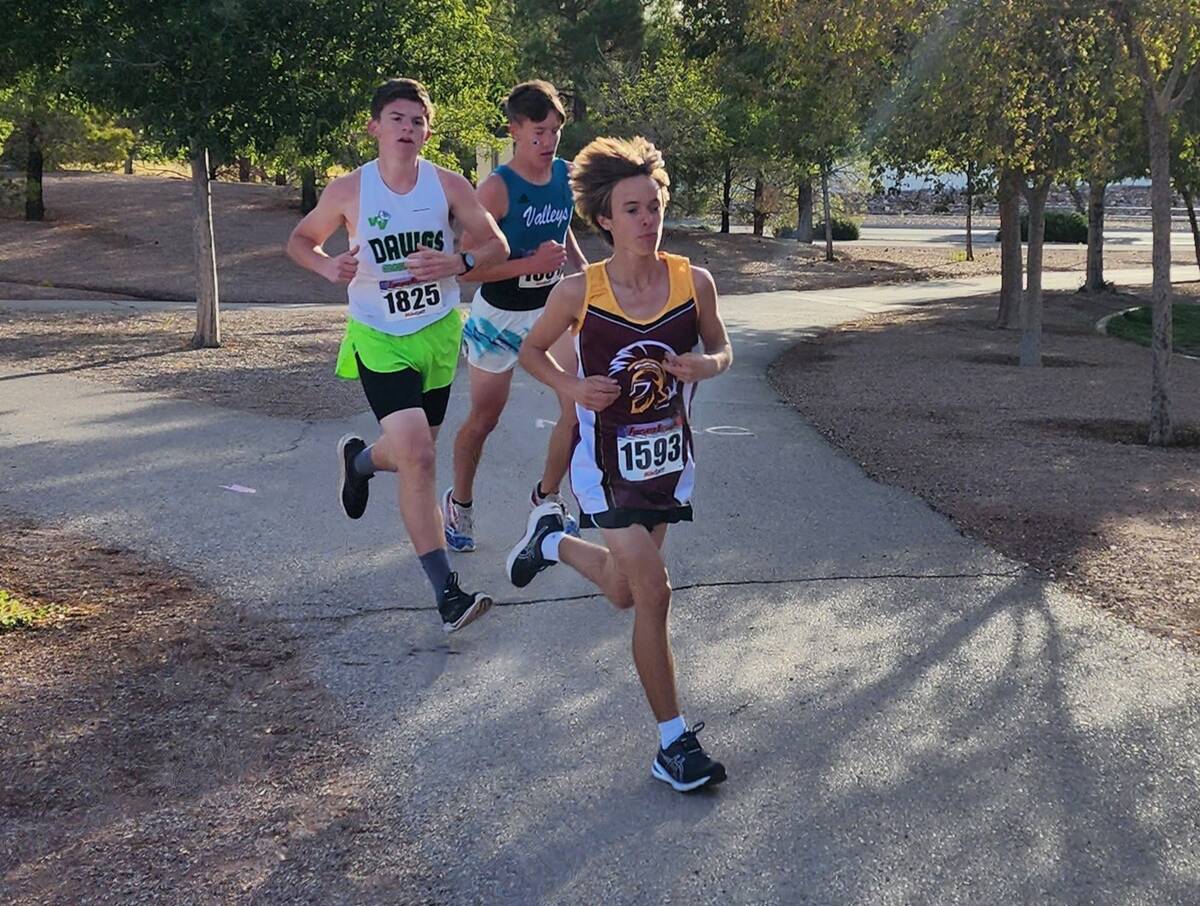 Danny Smyth/Pahrump Valley Times Freshman Timothy Stutzman tries to keep pace with the other runners as they round the pond at Veterans' Memorial Park in Boulder City during the 3A boys cross-country state race. 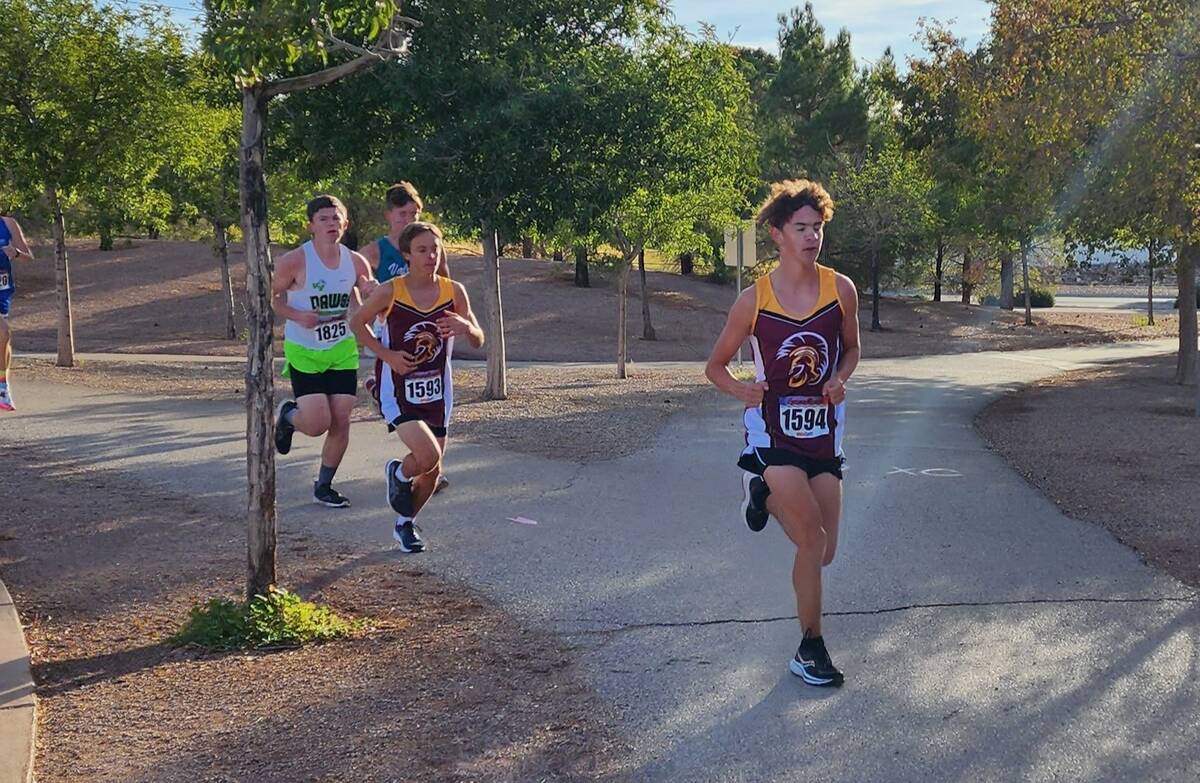 Veterans’ Memorial Park was the site of the cross-country state championship races on Saturday, Nov. 5, in Boulder City.

On the boys side, 69 runners representing, 17 schools from around the state, participated in the 3A race.

Spring Creek High School finished in first place as a team. Their junior, Nathan Thomas, won the individual race with a time of 16:21.

The Trojans team finished in eighth place with a total time of 1:41:30.

The Pahrump Valley boys team qualified for the state race by finishing in fourth place at the 3A southern regional meet with a team time of 1:45:32.

Because the Trojans qualified under the team condition, all seven runners were able to participate in the state event.

Just like the regional race, freshman Aydon Veloz was the top Trojan at the state race. He finished in 44th place with a time of 18:54.

Veloz’s finishing time at the state race was more than 30 seconds faster than his regional race time of 19:28.

He was the fourth fastest freshman in the race, finishing behind Carson Key of North Valley, Max Fisher of Truckee and Hal Thompson of Moapa Valley.

Fellow freshman Timothy Stutzman finished second on Pahrump Valley’s team with a time of 19:52, putting him in 55th place.

The final three positions of the race went to Jackson Floyd, Isaac Norton and Nicholas Cowart. They ran times of 21:40, 22:59 and 23:07, respectively.

For the girls 3A cross-country race, 65 runners were looking to represent well for their 15 different schools.

Somerset Sky Pointe came out as the top dogs in the team performance. They finished with a total time of 1:45:43.

Junior Jenna Walters of Virgin Valley ran the fastest individual time during the girls state championship race. She ended the event with a time of 19:58.

Walters beat her regional champion time of 20:33 by 35 seconds.

The Pahrump Valley girls team wasn’t able to qualify under the team condition with their overall performance at the regional race last weekend.

However, the Trojans did have two runners qualify based on their individual performance during the regional race.

Sophomore Aurora Whitney ran the fastest time at the state race for the Trojans. She completed the event with a time of 22:24, shattering her regional race time of 23:44.

She would finish in 26th place for the event.

Freshman Savannah Thompson was the only other Trojan runner to qualify for the girls’ state race.

Thompson finished her race with a time of 25:22, giving her 50th place for the day.

This will do it for another year of cross-country. The outdoor track & field season will begin in March.