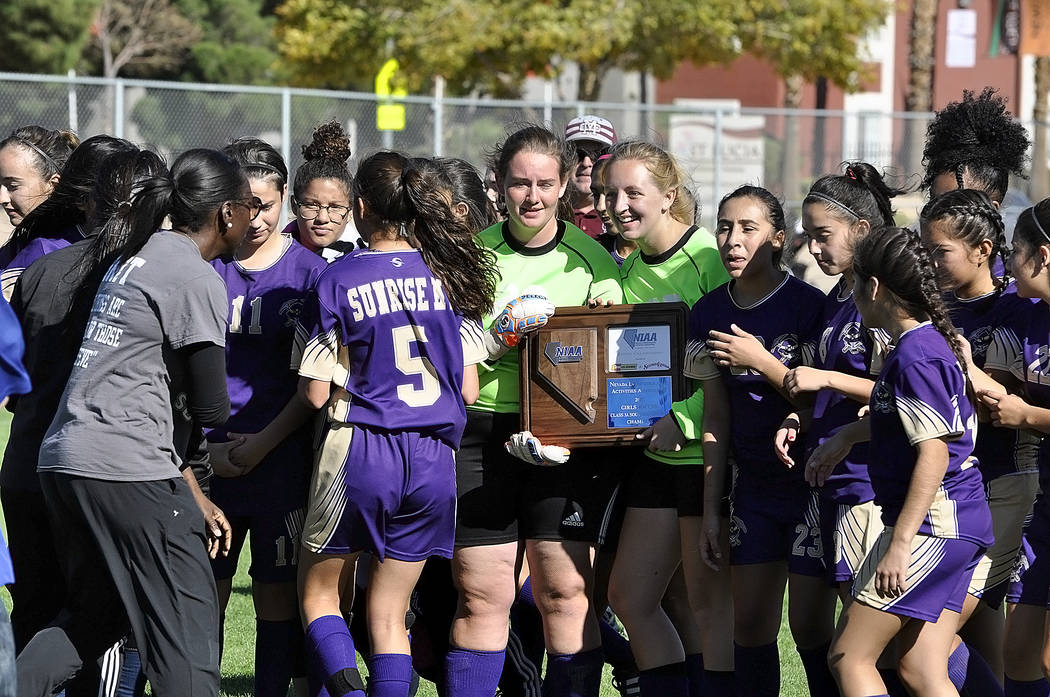 Horace Langford Jr./Pahrump Valley Times Sunrise Mountain celebrates as a team. The trophy is basically handed to them with little ceremony. There is no public address system and there are no places for the fans to sit. This happens every year at the Southern Regional championships. And when state is hosted by the south, the state tourney is run the same way. 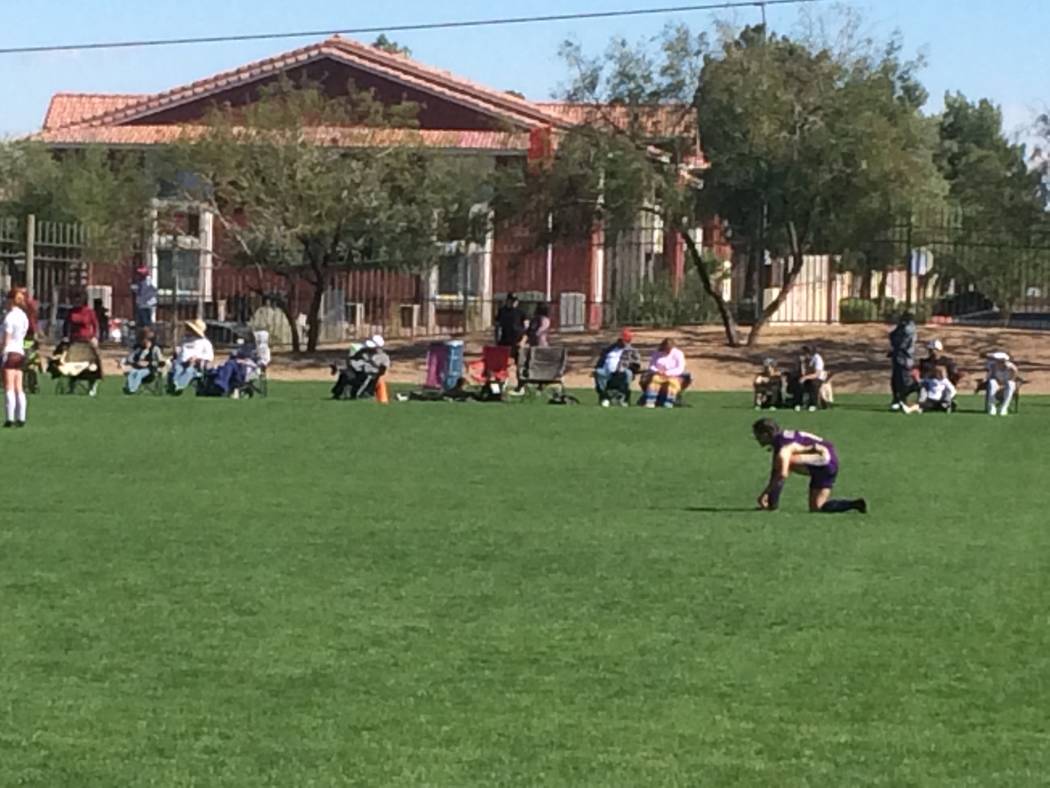 Vern Hee/Pahrump Valley Times Trojans fans line the field at the Class 3A Southern regional tournament last Saturday. There is no place to sit. The fans pay for a piece of grass and then there is no ceremony at all, just a game. It is like a youth soccer game.

The Southern Regional soccer tournament for all divisions needs to change. I went to the regional tournament and was really disappointed in how the tournament was held.

Soccer as a sport has been growing in attendance throughout the country and in popularity in general. More and more kids are playing the game and subsequently more are playing in high school.

I was watching the girls regional tournament on Saturday of last week and was amazed at all the fans watching the different games. But then I thought, what a shame these games are not in a stadium. What a shame there were no seats for all the fans to enjoy the game. The regional championship was at Bettye Wilson Soccer complex in Summerlin, which was OK for youth soccer but not accommodating to high school sports. It’s a complex where there are 10 soccer fields in all.

The Lady Trojans soccer team had a fabulous year and it wasn’t just because the girls made it to the state playoffs.

This year Pahrump Valley High School recognized the fact that soccer is a growing sport and that the parents want to attend the games.

“For years we have recognized that all sports are important,” Trojans athletic director Larry Goins said. “We have a national anthem ceremony, charge for the game, the snack bar is open and there is a public announcer there to start the game. With other schools, this is not the case. Some schools in Clark County don’t even have a gated stadium and a place for parents to sit.”

Another change that was made this year was the game times. To accommodate more fans, realizing more fans would come if the time was later, the school changed the times of the home games from 3:30 p.m. to 5:30 p.m.

Goins said this was done to increase the attendance at the games and it worked. This was encouraging for soccer as a sport for it is gaining in popularity. It is still not even close to the number of fans who go to football, basketball and volleyball games but it will get there.

But for some reason, the Clark County School District is not thinking on the same level.

The Southern Regional tournament was actually a step backward and a disappointment from the fans’ perspective and we are not talking about which teams win or lose.

The condition of the fields at the complex was great but that was not the issue.

This venue lacked fanfare or ceremony for the teams. Meaning there was no national anthem, no place for parents to sit, no public address system and no introduction of the players. It was sad. There was no ceremony at all, including when the games were over and the regional champion was named.

I am a bit miffed and this has been happening for some time in the Southern region. So I called Donnie Nelson, the assistant director at the Nevada Interscholastic Activities Association, to find some answers because the NIAA handles the regional tournament.

We have forgotten the athletes

“We talk about this every year,” he said. “One, it is difficult to find schools to host the playoff games. Cimarron Memorial High School volunteers to host every year. And well, every year the southern soccer coaches down south vote on this and they like having it there. They like the fact it is easier for them to scout out the other teams. Everything is at one place. State is also done that way when the south hosts the state tournament.”

Of course, it is easier, but who do we do this for, the kids or the coaches?

We need to have that ceremony to recognize that this is a special occasion. The kids need it and we should demand it.

The northern teams agree. They handle things differently. They have state and the northern regionals at host high schools. I have been to their state soccer tournament and it is at a neutral site. We should do the same and not just do it because it is more convenient for the coaches.