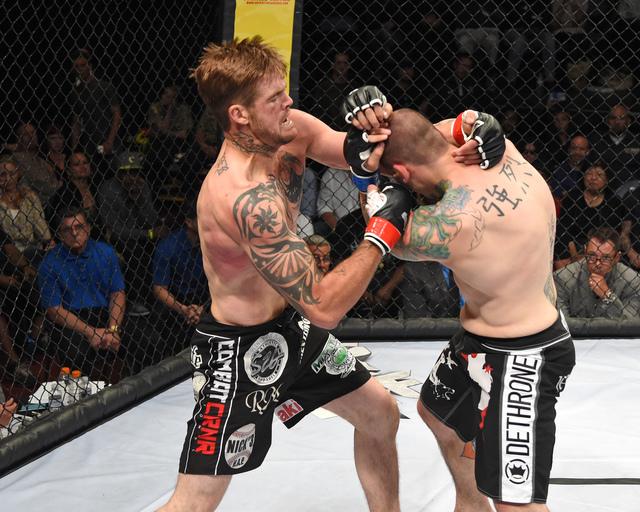 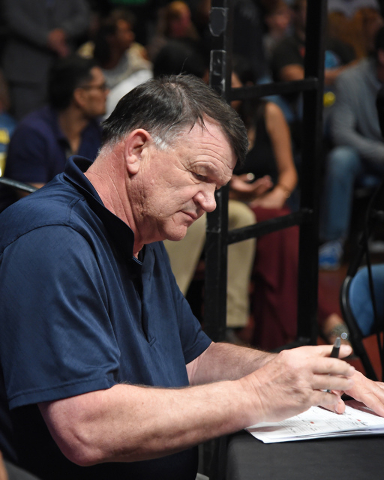 Mixed martial arts attracts fighters, but it also attracts those who want to be judges in the growing sport.

Becoming a judge can be just as difficult as a fighter, it’s just a little bit less painful.

The road to judging MMA fights starts at the amateur level. In Nevada, that starts with Ralph Cook, the Nevada State Director for the International Sport Karate Association. The association is the sanctioning body for all amateur MMA fights in Nevada, providing all the judges and officials.

Cook says MMA fighting is on the rise in the country and amateur fighting in Nevada is at the forefront of the movement.

“In Nevada we have some of the top amateur promotions in the country out here,” he said to Las Vegas News Blog.

Currently the organization has 35 amateur judges in the state. Many of these judges go on to turn professional and judge at the Ultimate Fighting Championship level.

Cook says if you want to become an MMA judge it starts first with applying to a sanctioning body or commission.

“You should have a background in martial arts or combat sports,” Cook told the Times this week.

Prospective judges don’t have to go through the association and can get licensed through private schools, such as Big John McCarthy’s Ultimate Training Academy. McCarthy was one of the early judges in professional MMA, including the early days of the Ultimate Fighting Championship.

“These schools cost anywhere from $500 to $1,500 and provide the knowledge needed to become a judge in three months,” Cook said. “Of course, the course work tells me that you are passionate and knowledgeable about the profession. The courses are recommended and to me the guys with more credentials will get more work.”

Cook said how long it takes to become an MMA judge at the amateur level depends on the individual. Each person is different. Some might put in more time than others, but usually a person can become a judge in six months to a year.

“They need to know that they have to put in the time,” Cook said. “They must show they are dedicated and passionate and show up.”

“When Brandon got into MMA fights he turned me on to judging,” he said. “I talked to Cook and started shadow judging.”

Andy Schneider has done 12 amateur fights. Shadow judging is where you judge a fight with a certified amateur judge. As a shadow judge, one scores a fight just like a certified judge and then compare one’s scores with the certified judge.

The new MMA judge said his interest in judging stems not only from his son’s interest, but is rooted in his 30 years of coaching wrestling at the high school level.

“Schneider already is on his way,” Cook said. “He has expressed his interest and he knows combat sports.”

Although Andy Schneider has a lot of wrestling experience and this helps him out in the judging, he says the two sports are judged differently.

The main difference is the damage component in MMA. The concept of damage is not necessarily done with points.

The longtime wrestling coach said the first thing you judge in MMA fighting is the damage one fighter does to the other fighter.

The points play a big role in wrestling but are not really used in MMA. He said a fighter in amateur MMA is given 10 points for winning a round but a judge is not assigning points for everything he does during that round, unlike wrestling.

Schneider added that judges are looking for significant signs that cause damage, “did a guy wince, does he have swelling, or is he bleeding.”

Another important factor for the MMA judge is the pain factor.

“Yes, control is how they get there, but the ultimate goal is the pain,” Andy Schneider said. “Does he cause the person not to be able to fight back. It’s a tough thing to learn and I am still learning how to figure all this out.”

He said during a fight on Friday in Las Vegas he mis-scored two fights.

“I got two fights wrong because I just didn’t see the damage that one did to the other,” he said. “I just was looking at the control aspect and the technique. I was a little frustrated in trying to figure that aspect out in those fights.”

He added, “My wrestling training has helped me but I need to focus more on what is damage and what is not and what causes the damage.”

In one fight Andy Schneider scored, he gave a round to a fighter who controlled the fighter by taking him down, but did not land any blows.

The bottom line he said is when you are scoring a fight in MMA judges look at punches and the damage. Judges, Andy Schneider said, will keep track of punches and if they landed and the amount of damage.

“Then at the end of the round they will say this guy landed 5-6 punches and this one only three,” he said. “So the guy with the most damage gets the round.”

There are other factors judges use said Andy Schneider.

Schneider said after damage, a judge looks at technique, which is how well a fighter throws punches and how well he wrestles. He also will look at how well he controls the cage, the fighting area.

He said a lot of different things go through your mind while you judge.

“You might have flow chart in your mind and look at damage, skill and ring skills,” he said. “Then you ask yourself who presses the most? Who has the more damaging attack?”

Schneider will be looking into his final training with Cook, and if he has to take the courses. He will mostly be judging fights in North Dakota, where he currently teaches and resides, but don’t be surprised if you see him back in Las Vegas one day sitting next to a cage.