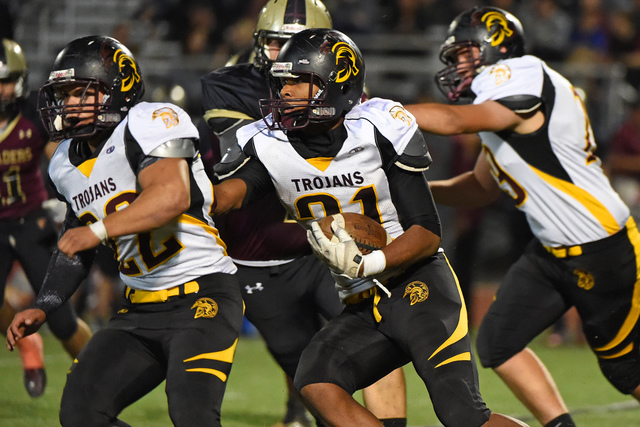 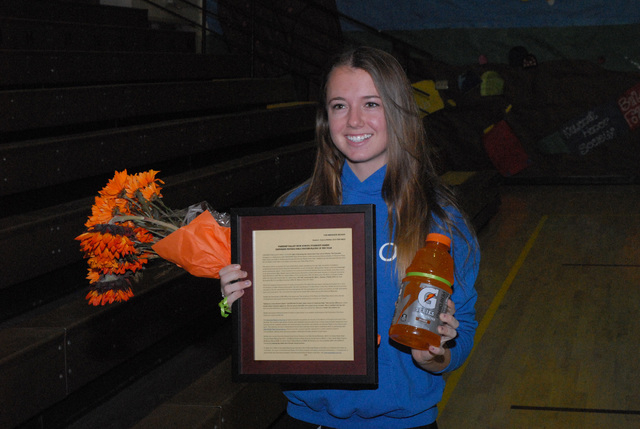 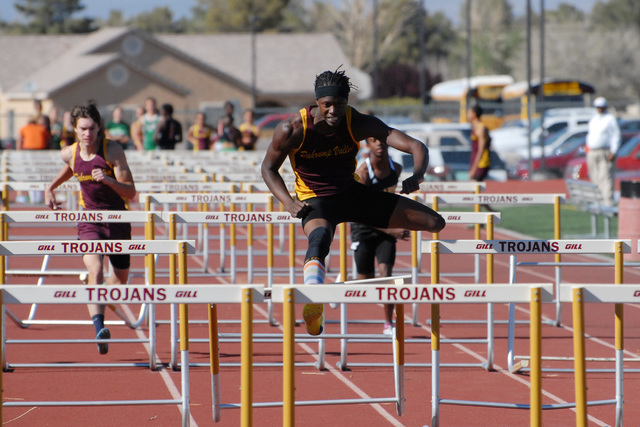 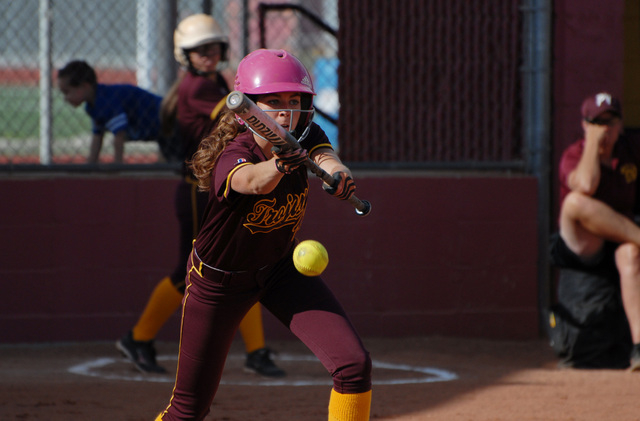 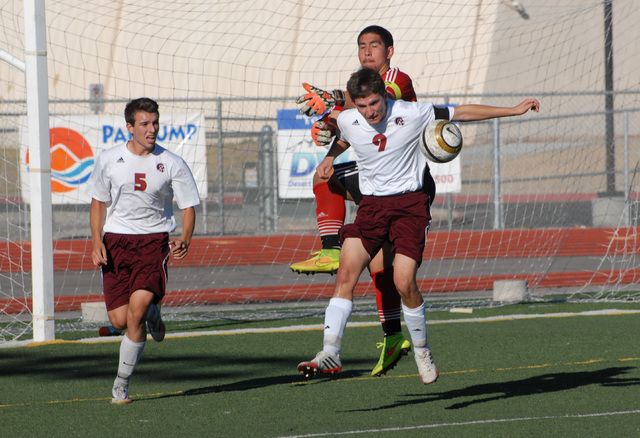 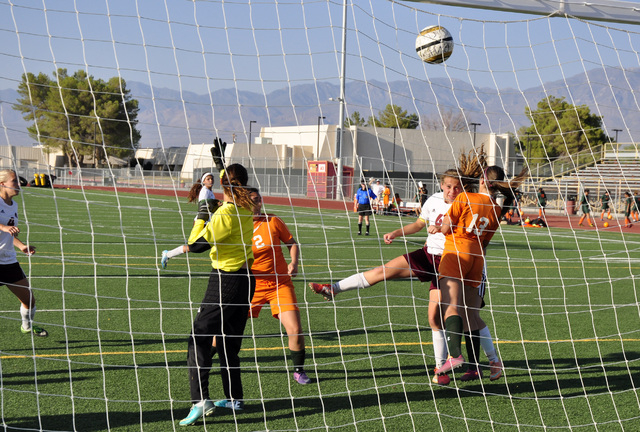 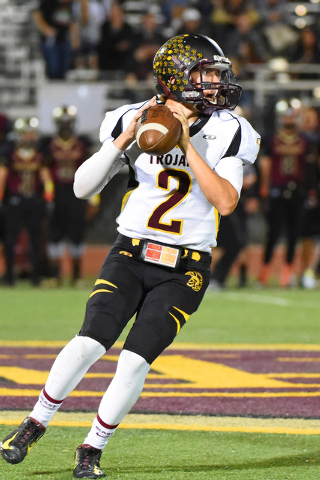 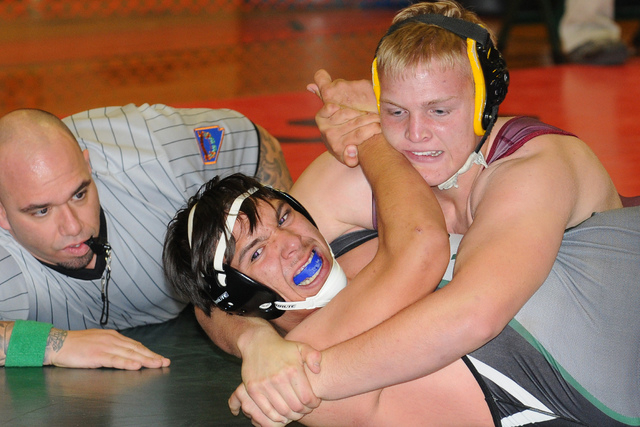 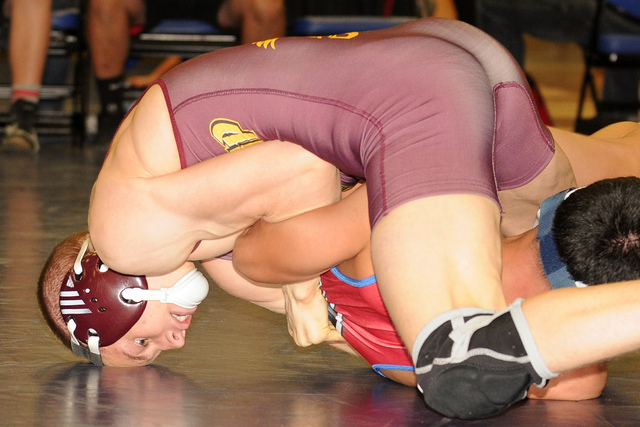 In sports there are definite winners and losers. This year’s most important sports stories have been characterized as either a win or a loss.

Sydney Sladek will go down as one of the most talented and most honored soccer athletes Pahrump Valley High School has ever known.

For two years the five-foot four-inch player led the Trojans to two Sunset League Titles, one Southern Nevada Division Title and one Division 1-A State Title.

Sladek was presented with the prestigious Gatorade Nevada Girls Soccer Player of the Year award for 2013-14 at a surprise school assembly for her at Pahrump Valley High School.

The year was the first time Gatorade has ever honored a student from Pahrump Valley High School.

In nearly two full days of wrestling on Feb 14-15, the Trojans varsity wrestlers placed first over the other five teams in the Sunset conference and all of the 6 teams of the Sunrise conference, giving them the title of first in the Southern Nevada Region.

Their victory was resounding and decisive, with a total Trojans team score of 275 points, versus the number two school, Virgin Valley, at 189 points and Boulder City at 154 points.

Eleven Trojan wrestlers spent a long, tough day in February, proudly wrestling their hearts out for championship positions at the State Championship Division 1-A Tournament at Primm.

As a team, the Trojans tied for 3rd place among the Nevada Division 1-A’s 19 of 21 high schools that made it to state.

In the wacky world of sports the number three team is usually not expected to do much in a tournament, but the Lady Trojans refused to follow the status quo.

The Trojans were the Division 1-A Southern Regional Champions for the first time since 2008 and one of the hottest teams in softball.

The last time the girls were state champions was in 2005. The team has won its last 4 playoff games, beating Moapa 12-6, Faith Lutheran 6-5, and Boulder City 8-2 and 6-4. In the past four games they beat the top team from the Sunrise league, Boulder City, twice and the top team from the Sunset league, Faith Lutheran, one time. The Trojans outscored their last four opponents 32-17.

High school golfers from all over the state descended on Pahrump for two days of golf.

The Nevada Interscholastic Activities Association had its 2014 state golf championships in Pahrump at Mountain Falls.

The Trojans were hoping to do better than 5th place. Trojans Coach Bob Hopkins said at the beginning of the day that his team needed to play better. His mantra was “better putting will win the day.”

The Trojans top three golfers seemed to be up for a better day with Austen Ancell sinking his putts for a par on the second hole, but Derek Moore seemed to be in trouble from the start with a bogey on the first two holes.

Ancell finished as the best golfer for Pahrump with a 161 and was 12th overall, Kyle Steib had a 162 and Moore was next with a 173. Kelby Lindberg followed with a 197 and Brandon Hastings finished with a 201.

The Beatty women’s track team came close to a repeat in Carson City at Carson City High School, but came up 10 points short to take a disappointing 2nd place. Beatty finished at 104 points to Sierra Lutheran’s 114.

If only a couple of events had gone to Beatty, the Hornets would be champions. The Hornets will have to wait until next year.

By next year their long distance runners will be unbeatable.

The Trojans left Pahrump in May with the chance of some repeat individual champions and perhaps a few new ones.

The team came away with two individual champions. They were in the boys 110 hurdles, Devon Montgomery and for the girls 800-meter run, Sydney Sladek. Both champions had a chance to be double state champions, but it was not to be. Both repeated in the same events as last year.

Freshman Bryce Odegard raced with the best in November and finished fourth. He was the only member to go to state this year from the boys and girls cross-country team.

The Badwater race returns to Death Valley National Park in 2015, but with restrictions. The biggest change will be when the race will be allowed to be held. It will no longer be during the heat of the day, but at night.

This year the National Park Service put a moratorium on most sporting events for almost a year-long safety review. No one even knew if the Badwater race would return to the park after more than a quarter of a century racing in Death Valley. The race will return to Badwater in July of 2015.

The Hornets went to Reno in November to play in their first state tourney since 1998. The last time Beatty won state was in 1993.

The Hornets went up against a strong defensive team in November at Spring Mountain and lost 74-22. Luis Flores was sacked seven times and couldn’t score in the second half.

Hornets Coach James Robertson was disappointed but was still really proud of his team for making it that far. He and his Assistant Coach Andy Ybarra took the 1-5 in league team and completely turned the program around to a 5-2 league team.

The loss of Rod Poteete was a big loss to Pahrump history as the retired teacher of 35 years was a local historian the early years of Pahrump sports.

He was the high school’s first baseball coach and helped build the current baseball field.

Poteete died at about 10 a.m. at his home in Las Vegas from complications of stomach cancer. He was 67 years old. The coach is survived by his wife Jean, older son Kemer, 30, and youngest son Ryne, 27.

Poteete will be remembered as a gentle giant, who loved everyone and had a gift for gab. He could talk to just about anybody on any topic, but his favorite was his adopted town, Pahrump.

Even though he lived in Las Vegas his entire teaching career, it seemed he knew everyone in this valley.

The Beatty High football field is often referred to as the “cursed field” because of the past difficulties to get grass to grow on it. During the spring months the field was reseeded once again.

The Nye County School District maintenance and operations manager, Cameron McRae, was true to his word and tried again to get things right after last year’s sod attempt failed. This time a freak rainstorm washed away the work that was completed in late June. The storm hit the week of July 4. The football team played all of its home games on the baseball field.

The high school will receive a new field this spring to the price of $70,000.

Julie Floyd retires after 30 years teaching in the Nye County School District and will also step down as the head of the Trojans girls golf team. Her last teaching post was with Floyd Elementary school where she taught physical education.

Floyd was a well decorated teacher and received teacher of the year in 2013 as well as being inducted into the Pahrump Valley High School Athletic Hall of Fame that same year for her 30 years of coaching.

Despite a 4-5 record and missing the playoffs, he did win all four home games during his last season beating two playoff teams, Cheyenne and Sierra Vista. It was truly some of the best football to come to Pahrump in a long time. Clayton will be missed.