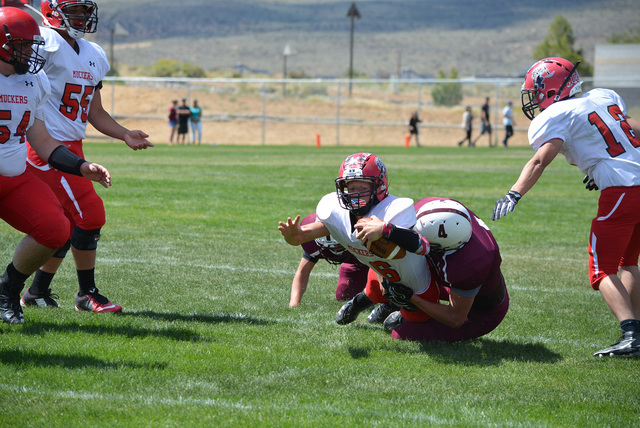 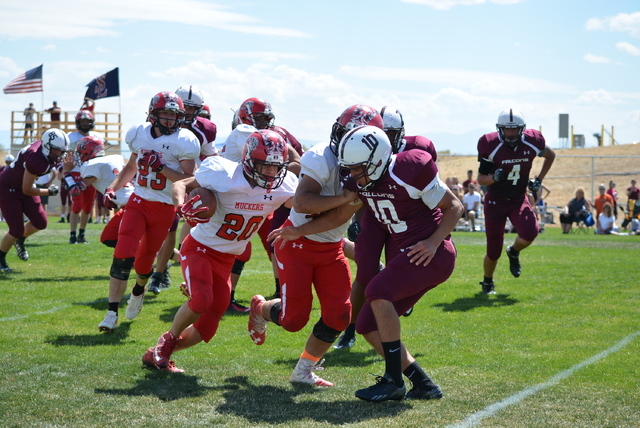 The Muckers (2-0 overall Class 1A Southern) relied mostly on their ground game to pound the Falcons. Otteson had three touchdown runs of three, six and 24 yards. The quarterback also threw two touchdowns passes of 24 yards and 16 yards to senior Tyler Kirkland and senior Vinny Bagarose.

A week ago when the Muckers played Mineral County, Muckers Coach Duffy Otteson saw the Sierra Lutheran coaches and a video camera operator taping their game but wasn’t bothered by it.

“They still have to stop our team, and I don’t think they can do it,” the coach said.

Tonopah took an early lead in the game of 20-6 in the first quarter and never looked back. At the half, the lead was 34-6. The Muckers dominated on both sides of the ball as the offense had 428 yards of total offense and the defense held their opponents to just three earned first downs the entire game.

The one area that Tonopah needs to improve in is penalties (10-66 yards) but with an aggressive defense, it comes with the territory.

“They have done a great job protecting their quarterback this season and have done a good job run blocking,” Duffy Otteson said.

During the Sierra Lutheran game, top performances were turned in by senior running back Bagarose, who had one TD rushing and one TD reception on the day. A touchdown was also scored by junior Kade Bunker on a 10-yard scamper.

Senior linebackers Brendon Eason and Tanner Otteson led the defense with nine tackles each and both had two sacks each. Also turning in good defensive performances were John Shiflet, who had four tackles, and Tyler Kirkland, who had an interception and three tackles.

Sacks were also turned in by Berkowitz and Lopez.

The Muckers are off this week. The team’s next game is Friday, Sept. 16 at Beaver Dam.