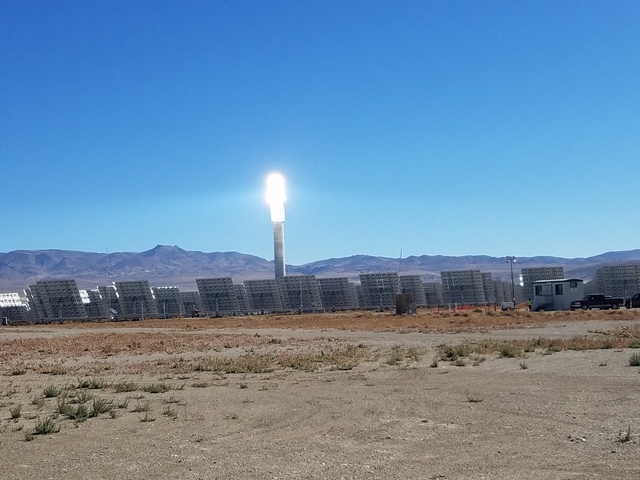 SolarReserve's Crescent Dunes solar plant in Tonopah is offline, a shutdown triggered by a salt spill. Company officials said the spill poses no danger to workers or the environment. David Jacobs/Times-Bonanza & Goldfield News

The newly opened Crescent Dunes solar plant in Tonopah is offline, a shutdown triggered by a salt spill, a plant official confirmed to the Times-Bonanza on Thursday.

“We did discover a small salt leak in one of the welds, in one of the tanks, that we’re in the process of repairing,” said Mary Grikas, SolarReserve’s vice president of global communications. “We were probably operating with a very small leak, but we couldn’t perceive it.”

The spill, called not hazardous to the public, workers or the land, was discovered in late October, said Grikas of Santa Monica, California-based SolarReserve.

“The salt itself is completely non-toxic,” Grikas said. “When the salt is solidified, it actually could be utilized as garden fertilizer so the salt itself is completely harmless. There was a little bit of smog that came out so we had safety inspectors come, and they have been monitoring the situation. Now there isn’t that issue. I guess it was when they first kind of realized there was a leak.”

There was no danger to the air, she said.

“It was a very slow leak, nothing ruptured,” Grikas said. “It didn’t explode and gush out or anything like that. That was probably why it took a little while to realize it actually was leaking.”

The exact amount of salt spillage was not immediately available.

“It wasn’t a huge amount,” Grikas said. “We pumped most of the salt back into the other tank. Right now we have a team that is looking at what they need to do to try and repair the leak in the other tank.”

The leakage was not serious enough to trigger a government investigation, Grikas said.

“Salt was not pouring out,” Grikas said of the spill. “We actually saw a little bit of salt residue around the skirting of the hot tank so we sent in a team to investigate it. They determined that probably in one of the welds, there was probably a small leak.”

The salt is used to help store the heat from the sun’s energy.

The plant was operating but is now shut down for the repairs and for other maintenance, she said.

“We had to investigate it for a while,” Grikas said. “We really don’t know how long it was leaking because it was a small amount. This is our first time dealing with a situation like this.”

Repairs are planned at the newly opened solar plant, called the world’s largest energy storage facility with its advanced technology.

“While it’s not expected, apparently there have been issues in salt tanks like this in other projects where they have used salt tanks,” Grikas said. “So we have brought in some people who have dealt with this before, and they are in the process of repairing it.”

Workers remain on the job at the solar plant off Gabbs Pole Line Road, she said.

“The timing was actually such that we decided we could also do some other maintenance and scheduled work on the plant. So the team has been doing that while they’re investigating the tank issue. We’re kind of ramping up for January. January is when we had always planned to be kind of fully online.”

Even with the plant offline, December is considered a low operational month was far as power generation, allowing for the other work at the site.

“The good news is is that it has nothing to do with the technology itself…which is kind of our biggest concern,” Grikas said. “It’s kind of a low-tech issue. The problem is that it is a time-consuming repair because the conditions are hot.”

“We need to take safety precautions to ensure the safety of all workers because of the hotness of the salt,” Grikas said. “So that is a time-consuming process to make sure the tank fully cools before someone can go in, and make the repairs to the weld. That is the time-consuming part of it.”

The contractor is responsible for repairs.

“So we are not losing money because of it,” Grikas said. “It is kind of a construction issue. No one is losing time on the job….It’s just something that they need to fix.”

As for as solar plant customers, NV Energy has been notified.

“They were not expecting us to be fully operational until January,” Grikas said. “We are kind of in that period of time where we were in our ramp-up, as well, anyway. It doesn’t seem to have been an issue for any parties other than it’s just frustrating to have a low-tech issue that has to get fixed.”