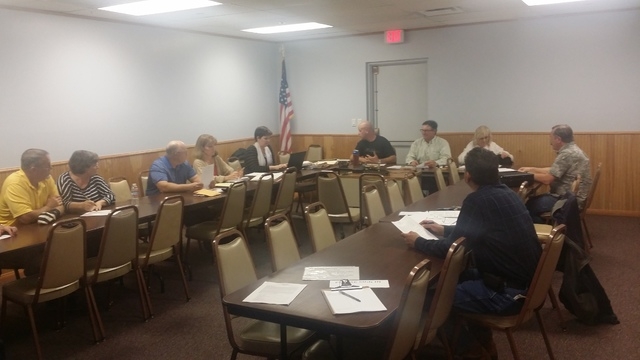 At more than 30 pages, Tonopah’s 2016-17 budget plan is in its final phases as the town lays out its spending priorities for the year ahead.

The town board on April 12 voted unanimously (with member Doug Farinholt absent) to approve the tentative budget. When finally adopted later this spring, it would kick in July 1, 2016 and run through June 30, 2017.

The town has total available projected budget resources of nearly $2 million in 2016-17 for the general fund covering day-to-day government services.

That surplus money is known as a “beginning fund balance.”

That means the town budgets for more than it actually spends.

“It has worked for us that way,” Mulkerns said.

“If things happened where we were not getting any money at all,” Mulkerns said, the town through its budget surplus/carryover would be able to take care of its obligations for two years.

“I’d say that’s a pretty good position to be in,” Mulkerns said.

Those numbers come from the state demographer, which the town is required to cite in its budget, Mulkerns said.

“If you go the Nye County website and look at their numbers, it’s about 500 more than this (demographer’s calculation),” she said.

The size of Tonopah’s projected population as calculated by the state leaves the town a bit puzzled.

“Our numbers are coming down, but not to that extent,” Mulkerns said. “We’re about 2,800, which is what Nye County has Tonopah at.”

Some population declines are attributed to work being completed at the SolarReserve Crescent Dunes Solar Energy Plant.

“Construction workers who were in town for SolarReserve are now dwindling and going away,” Mulkerns said.