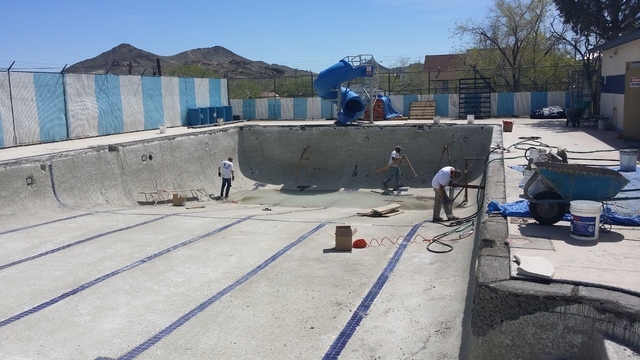 Though the summer recreation season is still weeks away, Tonopah’s Memorial Swimming Pool is buzzing with activity.

Work crews are inside the now-waterless pool, busy renovating it as part of a project to replaster it.

“It’s going well,” said foreman Ronald Jacoboni, president and owner of Tahoe Pool and Construction of Carson City, which secured the bid over the winter. “It’s on time and on schedule.”

The last replastering work dated back to 1991.

When the work is done, the pool could have a slightly different look.

“It will be just a standard white plaster,” Jacoboni said. “So the entire thing will be white, but the water will reflect the color of the sky so the water will look more light blue.”

“What you had in here before was a plaster finish,” he said. “But it had been painted light blue just to kind of make it smoother. The (new) plaster should last you at least 15 to 20 years before you have to do anything else with it.”

In all, between seven and 10 crew members are expected in Tonopah to work on the pool project.

“We think it’s a great little town to be in, work in and have the privilege to do your job,” Jacoboni said.

The pool is in Barsanti Park off Bryan Avenue.

As he and two other crew members worked inside the pool earlier this month, Jacoboni said the biggest challenge is making other upgrades that date back to the pool’s construction in the 1970s.

“Some material had come off the old shell of the pool,” he said. “We had to put in some more rebar (steel rods) and reform that whole section. I thought it was going to be a little more time consuming. But because we got (town) approval so quickly, we ended up getting the majority of the work done the last time we were here.”

“You have a good shell here,” Jacoboni said of the pool. “A lot of the stuff we see in these types of pools happens a lot.”

Similar work needed to be done to the adjacent baby pool, which also is being renovated.

While working on the pools, Jacoboni noticed that the town may have get work done in a room adjacent to the swimming area where pool equipment is located. He said it’s concerning because some piping is strapped together.

“It shouldn’t be that way, it’s just a hazard,” he said. “If you have a backup of pressure or something like that, it could blow up, and you’d have a flood in there. You’d have damaged equipment and things like that.”

“Even though the pump is in a lower area,” he said, “if the pipe does break, the water in the pool is going to force more water into there, it will probably get close to flooding the room, and it might damage other equipment.”

Jacoboni planned to talk to the town about the issue.