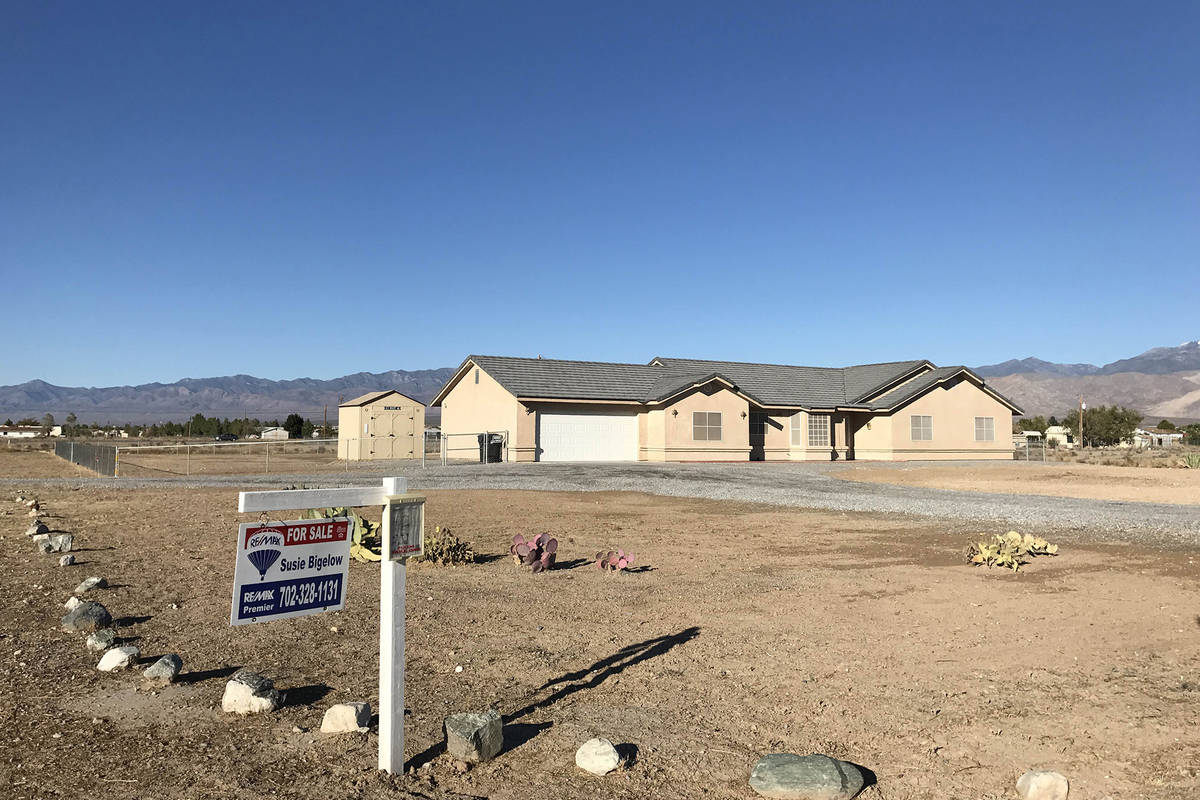 Pahrump Valley Times--file This 2017 file photo shows a home for sale in Pahrump. The median home price for existing single-family homes hit a record $325,000 in April. 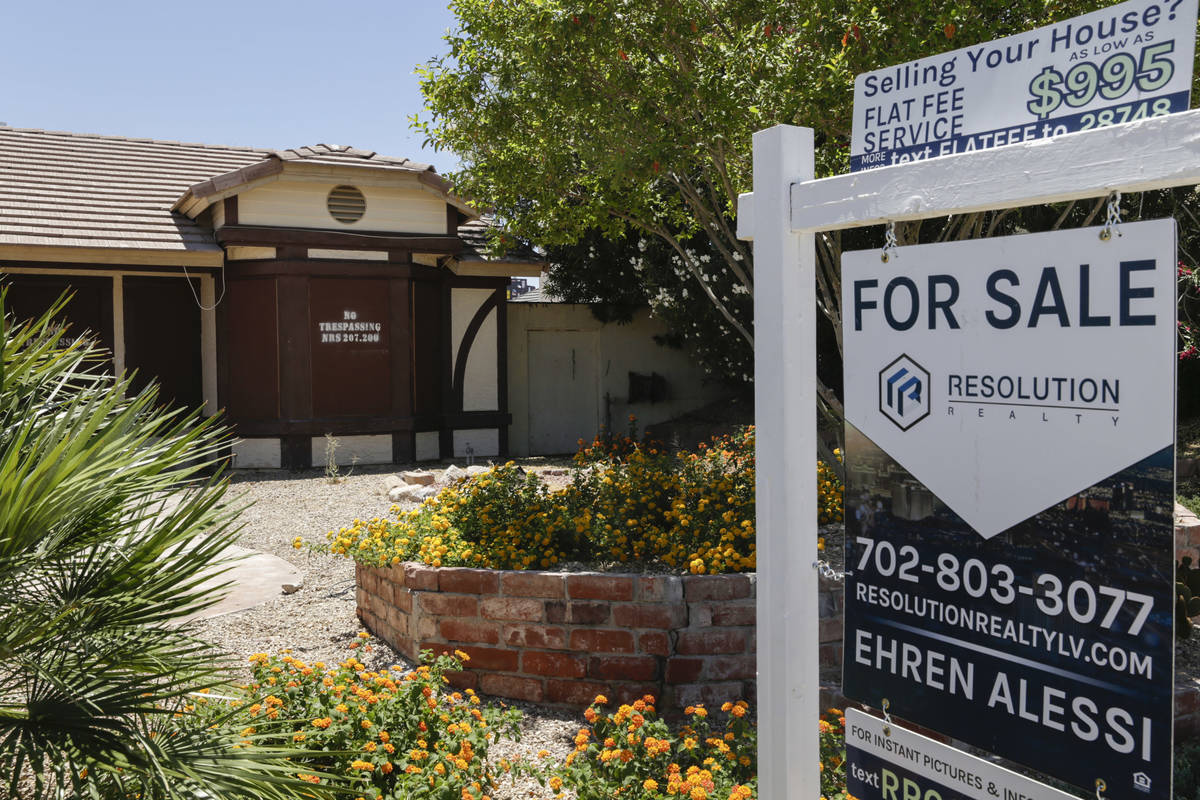 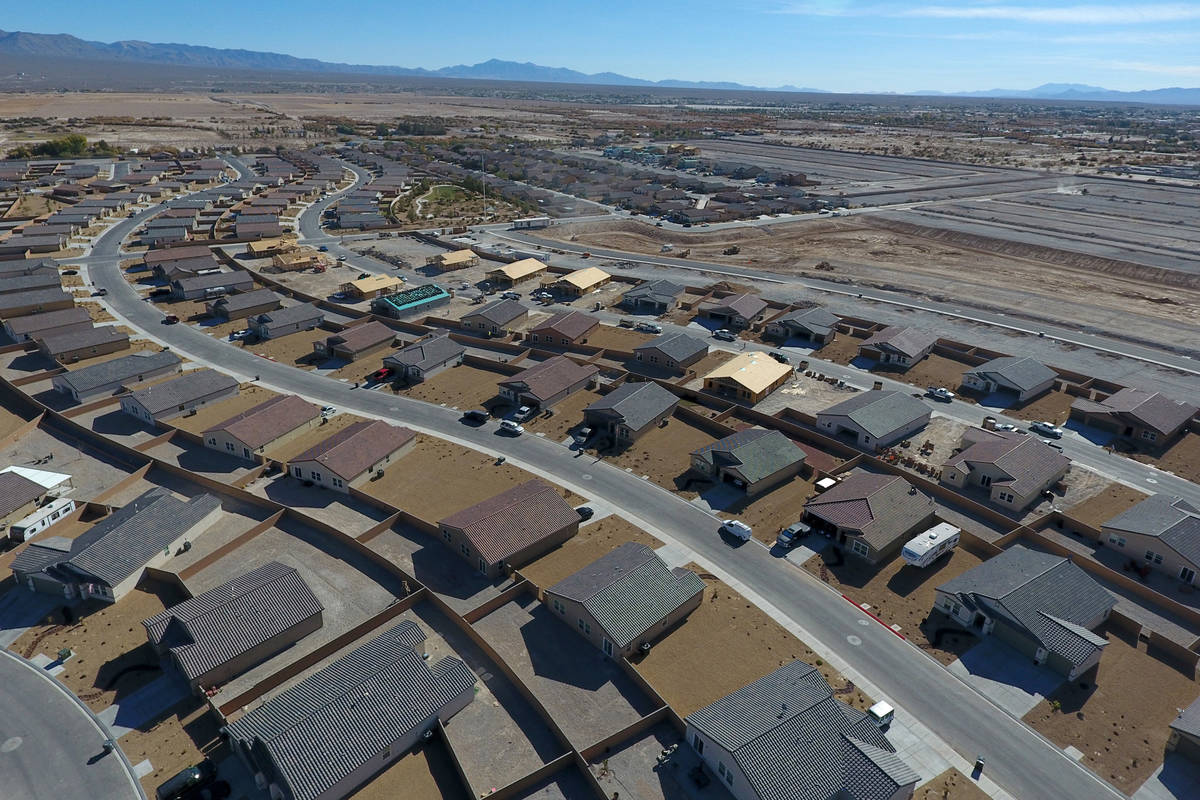 The median home price for existing homes in Pahrump for a single-family home was $309,000 in May, up 14.4% over the same time a year earlier, according to data from the Las Vegas Realtors’ multiple listing service. Pahrump’s median price for single family homes in May was down 4.9% from April’s record-breaking $325,000 median price, though still far above the previous year.

The Southern Nevada market, which includes Pahrump, reached a record-setting median home price of $385,000, up 22.2% from the same time a year earlier when the median price for single family homes was $315,000 in the valley, according to LVR data. This also tops the $375,000 record set in April in Southern Nevada.

“Like the previous month, these statistics benefit from a comparison to a time last year when our housing market was hit especially hard by the pandemic,” said 2021 LVR President Aldo Martinez in a press release from LVR. “It remains to be seen how much higher these prices can go in the coming months, since we’re reaching a point where more first-time and entry-level buyers are being priced out of the market.”

For the Southern Nevada market, homes have been selling faster than in previous years. In May, 93.3% of all

Martinez pointed to recent moves by institutional investors and builders spending millions to develop single-family rental properties across the U.S. as a glimpse of where the housing market could be heading.

“It seems unlikely that home prices will go down anytime soon, but it seems very likely that more people will end up renting homes for the foreseeable future,” Martinez said.

Martinez, a longtime local Realtor in Las Vegas, said the shortage of homes available for sale continues to present a challenge for potential buyers – and a rare opportunity for sellers.

This phenomenon can be seen in the number of homes listed on the market, With a six month supply being considered a balanced market, the pace of local home sales in May as compared to the number of existing homes available in the market was well under a one-month supply.

Martinez added that it has been many years since Southern Nevada had a six-month supply of homes.

According to LVR, by the end of May, the organization reported 2,031 single-family homes listed for sale without any offer. Though this number was down 65% from the same time a year earlier, Martinez said that the number of homes listed without any offer increased for the third straight month.

A total of 4,100 existing local homes, condos and townhomes sold during May, according to LVR.

“Compared to the same time last year, May sales were up 87.3% for homes and up 144.9% for condos and townhomes,” LVR said in a release. “So far this year, local home sales are on pace to exceed last year’s total.”

Though more homes are selling over 2020, Martinez said the number of sales have started declining on a month-to-month basis.

The Southern Nevada housing market hit its post-recession bottom in early 2012 and has since experienced steady year-over-year growth.

Since the pandemic took hold, Martinez said the local housing market has been more in line with national trends, where home sales and prices are exceeding expectations.

Martinez attributes a lot of the recent price growth to a shortage of homes available for sale, strong demand and historically low mortgage rates.

Additionally, Martinez said research from the National Association of Realtors shows that homeowners are staying in their homes longer and are slower to move in recent years.

Martinez went on to say that buyers should be patient and persistent, where an increasing percentage of homes with multiple offers on them end up back on the market and “are then awarded to the second, third and even fourth buyer in line.”

In May, LVR reported that 30.9% of all local property sales were in cash for Southern Nevada, which is up 14.5% from the same time a year earlier when the housing market was reeling from the effects of the pandemic. The number of homes being sold for cash is well below the March 2013 cash buyer peak of 59.5%.

“With eviction and foreclosure bans still in place, the number of so-called distressed sales remains near historically low levels,” LVR said in its release. “LVR reported that short sales and foreclosures combined accounted for just 0.7% of all existing local property sales in May. That compares to 1.5% of all sales one year ago, 2.0% of all sales two years ago, 2.6% three years ago and 6.8% four years ago.”

According to Martinez, these percentages may rise slightly when the moratoriums are lifted.

LVR reports housing statistics on a monthly basis on data of homes sold through its multiple listing service. These statistics don’e necessarily include newly constructed homes sold by local builders or homes for sale by owners.