A Nye County Sheriff’s Office inmate racked up another charge while behind bars.

As a result, Manallanes-Ibarra conducted a pat-down search on the inmate kitchen worker.

“When he handed me his right sock, I turned it inside out and a piece of folded paper fell to the ground,” Manallanes-Ibarra said in the report. “I opened the paper and found a white crystalline substance.”

The report went on to state that Manallanes-Ibarra separated inmate Lewis to the kitchen section of the jail where he was read his Miranda Rights and Lewis responded that he understood them.

“I began to question Lewis regarding the substance and he stated it was Epsom salt for his feet, and he uses it because he walks around on his feet all day,” Manallanes-Ibarra stated in the report. “He (Lewis), further stated that he washes his feet in the kitchen’s bathroom and he also told me that someone from jail gave it to him but would not reveal who it was.”

A test was conducted on the substance by Deputy Jeremy Turek, who found it presumptive positive for methamphetamine.

Pictures were taken and the substance was sent out to the Las Vegas Metropolitan Police Department for testing.

Inmate Lewis was found in violation of Nevada Revised Statute 212.160, that being possession of a controlled substance by a state prisoner. 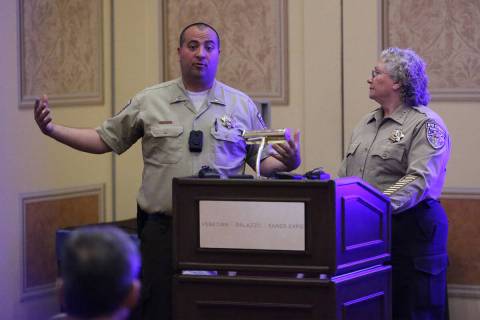