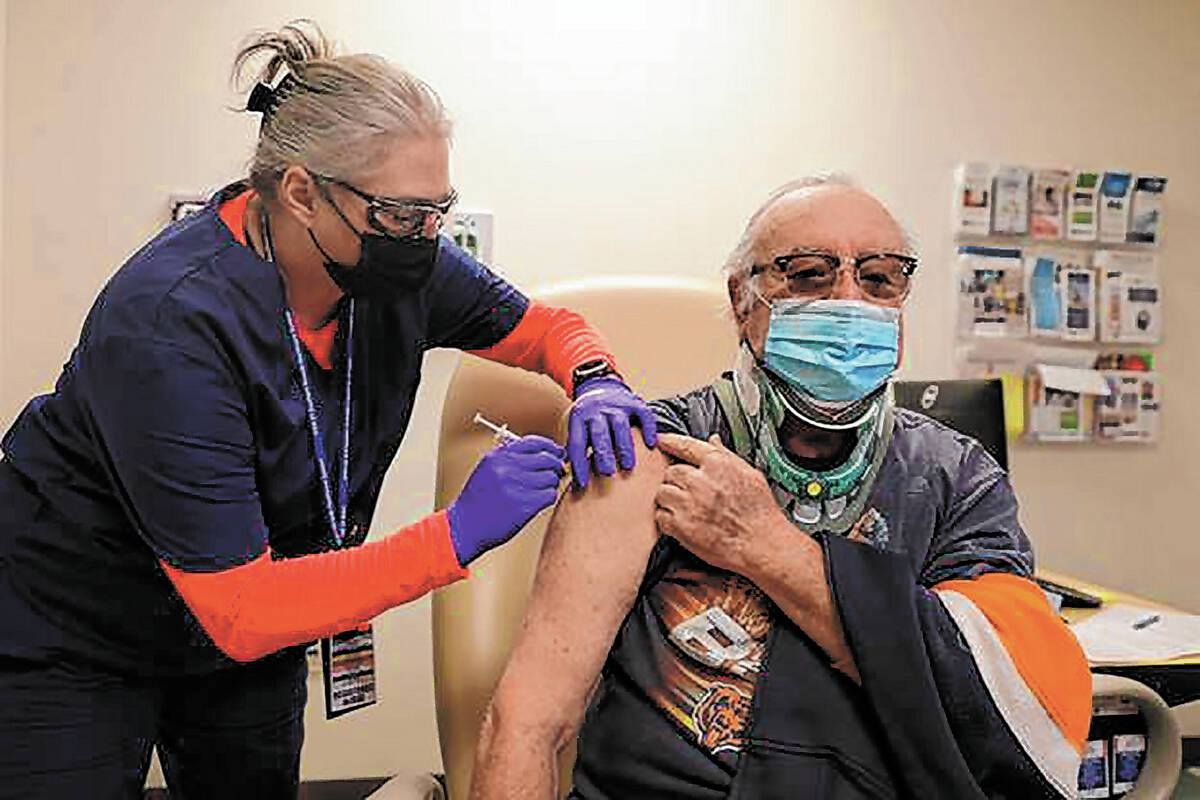 Frank Duszynski Jr., 72, received his first dose of the Pfizer-BioNTech COVID-19 vaccine in this file photo from Feb. 6, 2021 at the Pahrump VA Clinic. Vaccination clinics are closing across the state as the virus eases. (Special to the Pahrump Valley Times)

Nye County officials on Monday reported 27 new coronavirus cases and another death, as most long-term metrics continued to decline. The new cases do not represent those who tested postitive using at-home kits, which have become more available in recent months.

Overall long-term metrics have been dropping very quickly since the omicron-driven surge peaked over a month ago.

The state has repeatedly reported a significantly higher number of deaths each day than the daily average suggests. That means looking at the number of deaths reported over a specific period of time is misleading, because public health officials have said the date a death is reported is not necessarily the date the death occurred.

There were more positive signs this week as the county dropped out of the Centers for Disease Control and Prevention’s “high” rate of transmission, but that happened a week after health district officials said they weren’t sure the CDC metrics showing the county in the highest transmission tier were correct.

The county’s 14-day test positivity rate, which tracks the percentage of people tested who are found to be infected with COVID-19, stood at 9.2 percent on Monday, the ninth highest in the state.

Since the first case of the virus was reported in March 2020, there have been 6,359 cases recorded in Nye County.

Meanwhile, the state reported 452 new coronavirus cases and 31 deaths, bringing totals posted by the state Department of Health and Human Services to 648,052 cases and 9,875 deaths.

Of the state’s other closely watched metrics, the statewide 14-day test positivity rate dropped 0.3 percentage point to 5.8 percent, while the number of people hospitalized with confirmed or suspected cases of COVID-19 dropped to 252 from 278 on Tuesday.

State data showed Wednesday that 56.73 percent of Nevadans 5 and older were fully vaccinated, compared with 43.4 percent in Nye County.