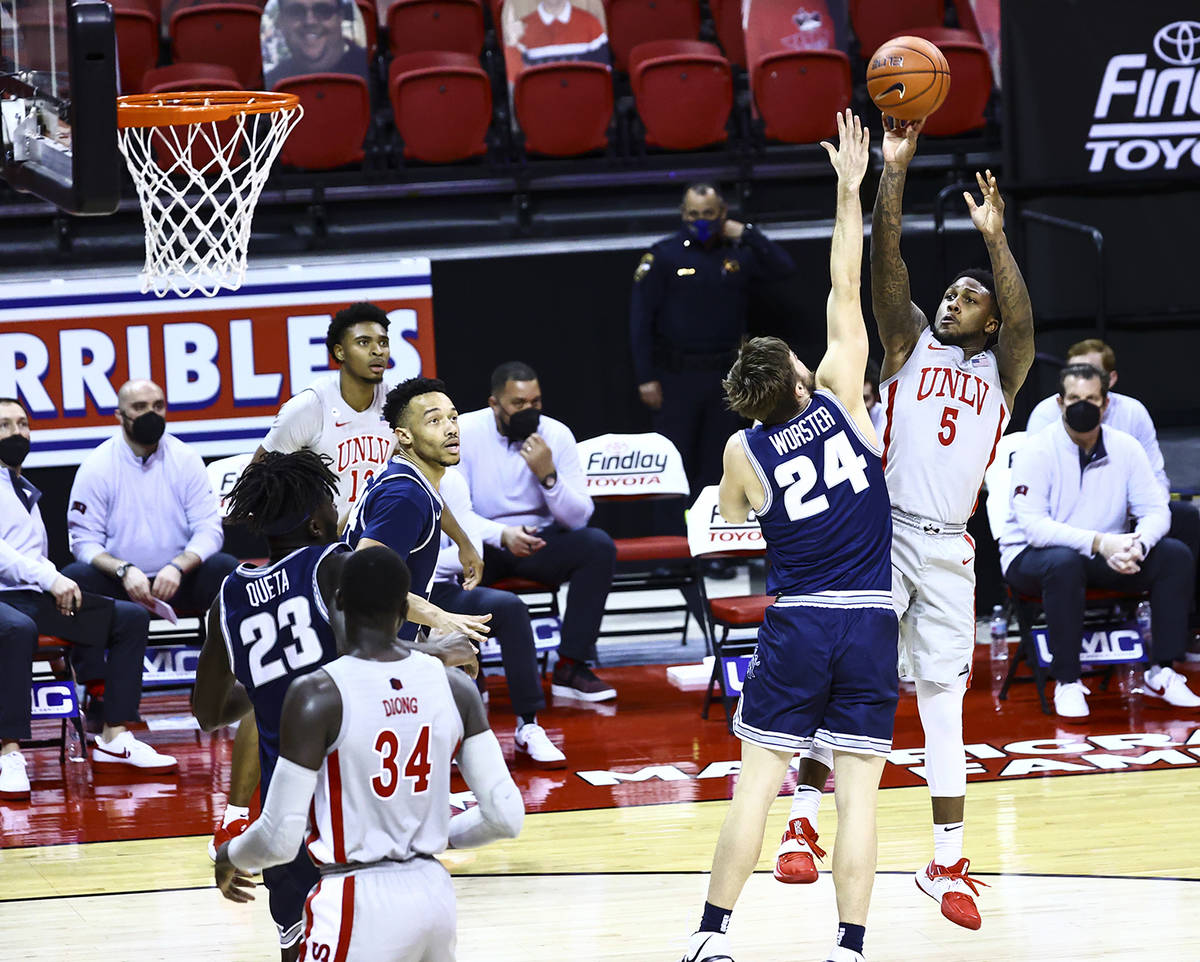 Chase Stevens/Special to the Pahrump Valley Times UNLV guard David Jenkins Jr. shoots over Utah State's Rollie Worster during the second half Jan. 27 in Las Vegas. Jenkins shared the team lead in scoring with 13 points Sunday night in an 89-60 loss to UNR in Reno. 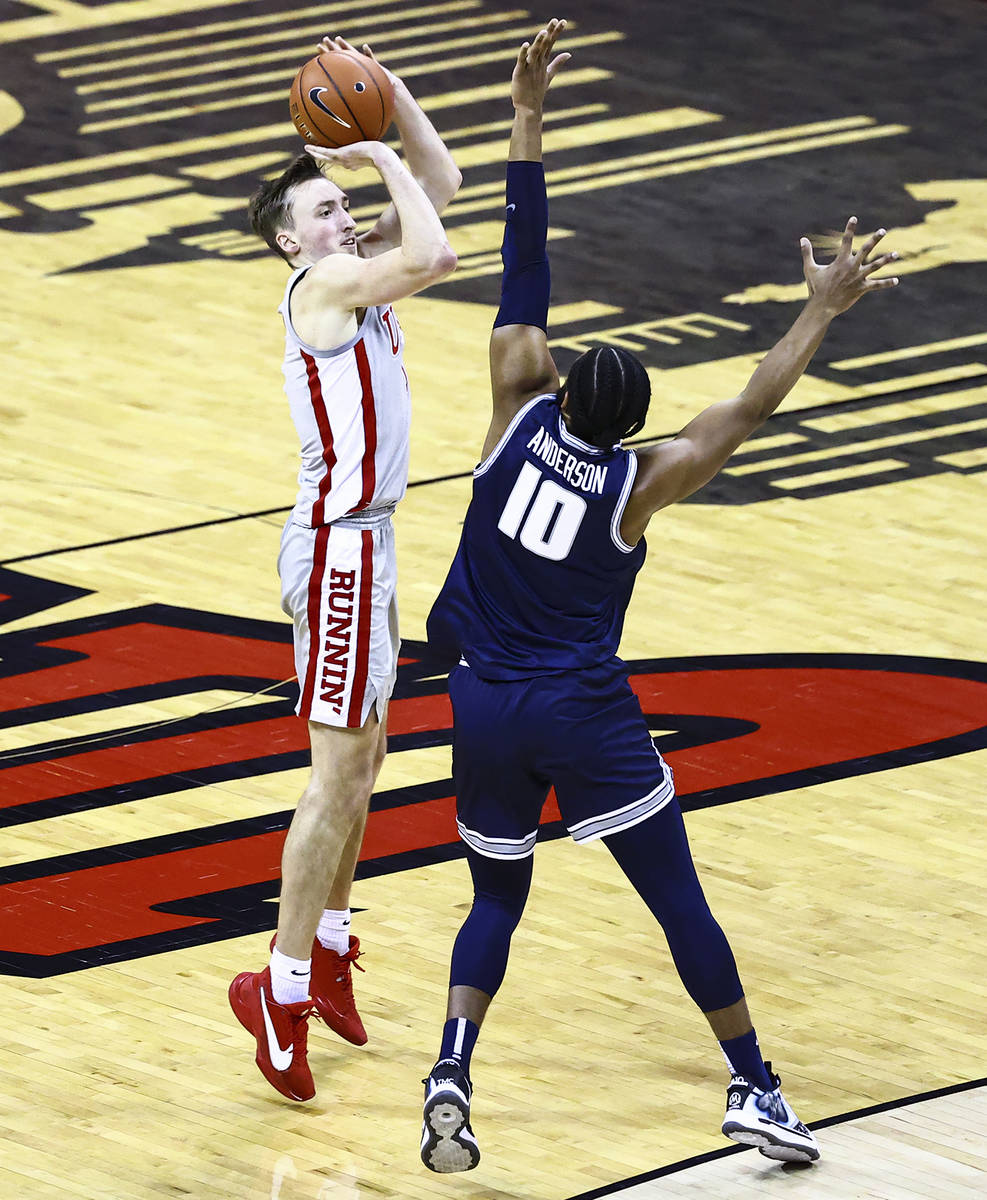 Chase Stevens/Special to the Pahrump Valley Times UNLV forward Moses Wood, shown Jan. 27 against Utah State at the Thomas & Mack Center, scored 13 points to tie for the team lead in scoring Sunday night during an 89-60 road loss to UNR.

The opener of the two-game Silver State Series was all UNR on Sunday night.

The Wolf Pack shot 56.4%, had four players in double figures and never trailed in an 89-60 win at Lawlor Events Center in Reno, their seventh straight win over intrastate rival UNLV.

The teams met again at 6 p.m. Tuesday in Reno.

“Unacceptable effort to compete, especially in a rivalry game,” UNLV coach T.J. Otzelberger said. “That’s not how we practice. That’s not how we compete and prepare. That’s not Runnin’ Rebel basketball, and we’ll address it tomorrow in practice and film so that we don’t end up in this situation Tuesday.”

Desmond Cambridge scored 17 points and Grant Sherfield had 15 points and 11 assists to lead the Wolf Pack (11-7, 6-5 Mountain West). David Jenkins and Moses Wood paced UNLV with 13 points apiece, but they combined to shoot 8 for 27. Caleb Grill scored 11 points for UNLV.

The Rebels (6-8, 3-4) were without leading scorer Bryce Hamilton, who was out with an ankle injury, and their offense never got into a rhythm. Otzelberger said Hamilton was questionable to play Tuesday.

“He’ll continue to be day to day, and our No. 1 priority will be Bryce’s best interest and making sure of his health and safety,” Otzelberger said. “When he’s ready to go, he’ll be back out there.”

Here are three takeaways from the loss:

UNR flew out of the gates with its 3-point shooting, making its first five and seven of its first nine — with seven players making one apiece.

“We contributed to their ability to make shots based on our competitive spirit not being good enough,” Otzelberger said.

“We weren’t as intentional about what we talked about doing. We seemed to be complacent and a step slow. Credit to them. They made shots, but we had something to do with that.”

2. Punch off the bench

While UNLV was limited to eight players, 10 of the 12 UNR players who got into the game scored.

Otzelberger wasn’t happy with any of his players’ effort, but he was particularly upset that his older players didn’t take the leadership reins.

“Teams that I’ve been around usually take the personality of certain players,” Otzelberger said. “Some of our older guys need to have a sense of pride in that personality that we take as a team. Even though we’re heading into February, certain guys have to understand that’s more of their obligation to this program than they do at this point.” 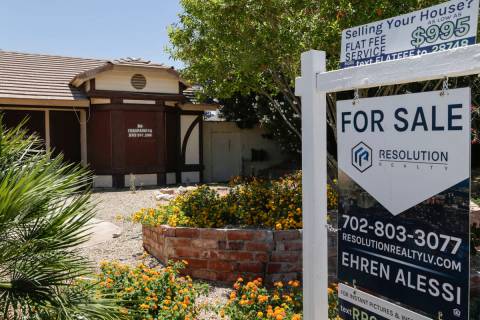