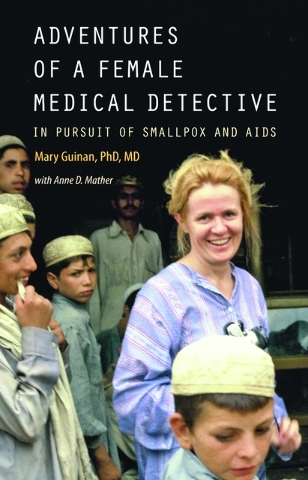 Summer colds are the worst.

You’re not sure how you caught one, but you did – and now you’d love to know where it came from. Or maybe that’s one of those medical mysteries, the kind that Mary Guinan, PhD, MD solved. In her new book “Adventures of a Female Medical Detective” (with Anne D. Mather), she takes you on some not-so-cold cases.

Born of Irish immigrants, Mary Guinan says her parents were grateful for America’s opportunities and “made it clear” that college was mandatory for each of their five children. Guinan chose Hunter College in New York, where she learned that she had a knack for chemistry; what she really wanted was to study medicine, but “women were rarely admitted to medical school” then.

“Frustrated with a lack of opportunities,” she graduated with a degree in chemistry and entered the astronaut program in Houston. Options were limited for women there, too, so when she heard about a plan to eradicate smallpox, Guinan applied to train with the CDC for a chance to join the effort. Told that India disallowed women into the program, she had to argue to get her first big case but once overseas, the remote area in which she’d been assigned became smallpox-free because of her efforts.

“It was,” she says, “one of the most exciting experiences of my life.”

Back in the U.S. and further into her career, Guinan “stumbled upon” work in STD research, gaining a reputation for specialization. That led to an edgy and ultimately irksome tour in Pakistan, then to an assignment with the CDC to study “the emerging AIDS epidemic.”

In California, she followed a group of AIDS research patients, and accidentally received a needlestick. She writes of irritation with a writer over confidentiality, and problems with media misinformation on AIDS and women. She witnessed “unrelenting and vicious homophobia” against HIV-positive patients, some of whom she particularly and poignantly remembers. And now, as professor emerita at the University of Nevada, she busts some myths.

From the comfort of your sofa or chair, there’s nothing quite like a good adventure. But Hemingway, Roosevelt, Heyerdahl, Peary, you can put them aside after you’ve read “Adventures of a Female Medical Detective.”

Author Mary Guinan, PhD, MD, is a true pioneer, and the stories she tells of her early career are jaw-dropping. Seen through modern eyes, it’s rather jolting to remember that it wasn’t so long ago that women were completely barred from certain jobs in the workplace. In every job-related battle she fought, Guinan’s tenacity is impressive and empowering.

And then there are the adventures hinted about in this books’ title: Guinan (with Anne D. Mather) shares the kinds of stories that you’d hear at a dinner-party. Sometimes, there’s humor attached to them; others are told with a sense of outrage and humanity.

My only complaint? Not enough pages in this skinny book, which made me want more. For medical students, field workers, doctors, or anyone who loves swashbuckling tales, “Adventures of a Female Medical Detective” is a book to catch.