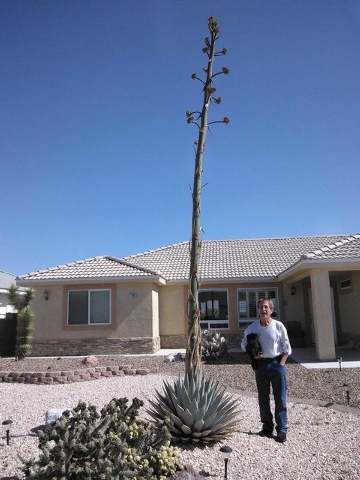 It’s not something someone sees every day, week, year or even decade, but local resident Richard Mendenhall feels fortunate to bear witness.

Standing in his front yard is a plant that’s quite common in the desert. But what makes it different is that it blooms every 100 years, give or take a few decades.

The plant, Agave Americana, also known as the Century Plant, is a flowering species of the Agavaceae, which is native to American Southwest deserts.

Mendenhall said he didn’t know much about the plant until a friend recently stopped by for a visit and clued him in.

Mendenhall, a new resident, moved to Pahrump from Alaska back in November

“My friend John looked it up online and that’s how we found out that it was called a Century Plant,” he said. “It blooms every 100 years, but it seemed like it just popped up overnight.”

Mendenhall said he hadn’t paid much attention to the towering plant, which now stands close to roughly 25 feet high.

“I’ve never really done anything to it, I figure that’s nature’s job and it’s been doing fine on its own,” he said. “I’ve never watered it, but maybe I should. I don’t know.”

Not far from Mendenhall’s home is the University of Nevada Cooperative Extension, where Master Gardener Debby Woodland is the coordinator.

Woodland said though the Agave is referred to as a Century Plant, it not uncommon for the blooms to appear a few decades before their 100th year.

“From the time of planting and depending on how much water they receive, they’ve been known to bloom as early as 10 to 20 years after they’ve been planted,” she said.

Woodland also said once the plant has bloomed, it’s days are numbered.

“Once they bloom, that’s it, that’s the end of their life,” she said. “The Agave dies down below and hopefully you are able to propagate the pups that come out from the base of the plant.”

Agaves produce new agave when they flower and produce offsets or pups, which ensures the continuation of the species.

Woodland also noted the rate of growth of the plant, which she said is unlike most any other desert plant.

“The speed of which, when they throw that stalk up can be anywhere from six to 12 inches in a day depending on the type and health of the Agave.”

The Master Gardener also said caution should be taken once a mature Agave dies.

“So many people just leave them in the ground when the Agave dies,” she said. “It’s basically an Agave skeleton, but you have to be careful because they will tip over. As the plant dies they lose their root system and can fall over and the base of the plant will turn completely brown.”

Additionally, the American Agave plant is closely related to Agave Tequilana, commonly called blue agave. The heart of that plant is used to produce tequila. 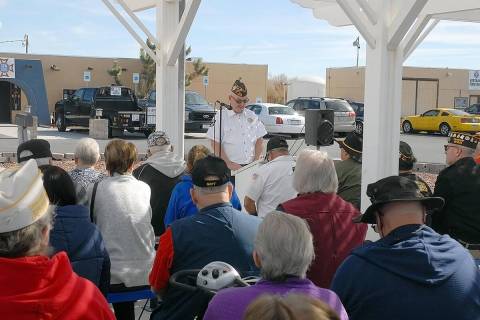