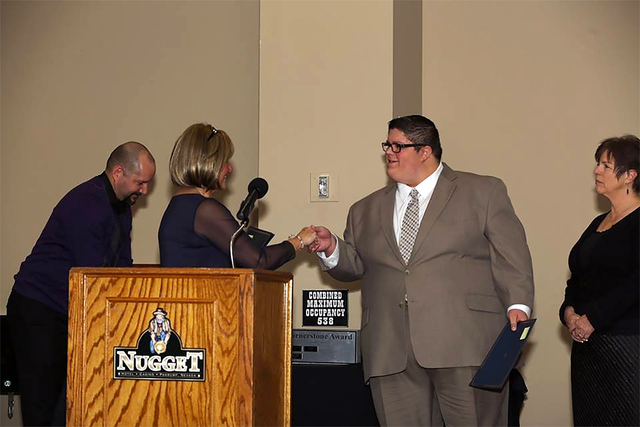 The event is held to announce new incoming board members and honor area businesses, organizations and individual agencies who continually demonstrate their respective importance and service to the community.

Chris Erwin, chief executive officer of the chamber, said four new individuals were selected to serve on the board.

“Not all of our board of directors were there,” he said. “We have seven board of directors and Sue Bai is now the president of the Pahrump Valley Chamber of Commerce. Ryan Muccio is still vice president, while Sally Kerr and Chad Goins will serve as treasurer and secretary respectively. Terri Rogers is our new director who took over Tyann James’ position.”

Aside from the installation of new board members, the event also allowed the chamber to recognize agencies and individuals who have made a commitment to serve the community, in the areas of nonprofits, businesses and volunteer of the year.

He credited the coalition’s Stacy Smith and her staff’s ongoing community support for the Cornerstone Award.

“Stacy Smith and her team have grown so much over the past six to seven years, we thought it was fitting to award them the Cornerstone Award,” he said. “Home Depot got a $10,000 grant to bring the Vietnam War memorial wall to town. Deanna O’Donnell’s award was very well deserved because she does a lot of volunteer work for this community. She’s very supportive and it shows. It was just a great evening.”

Chamber of Commerce Event Coordinator Vicky Hilling said each year, the award recipients are unaware of their awards until the night of the ceremony.

“The recipients have no idea that they have been selected to receive the award,” she said. “It is a complete surprise to them and there were a lot of very surprised people that earned an award Saturday evening.”