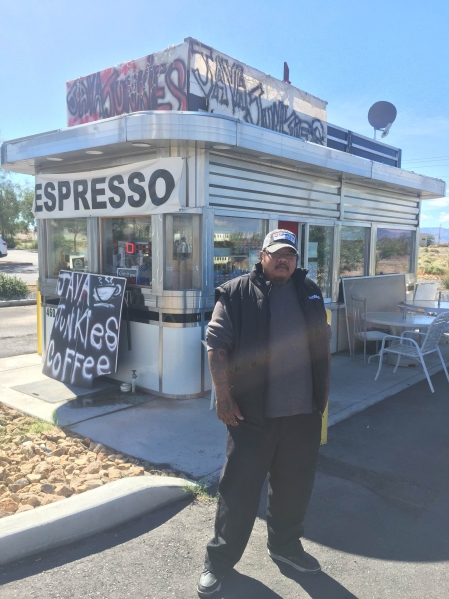 Outlasting most other businesses that occupied the same space at 460 Highway 160, Java Junkies will eclipse the one-year mark later this month.

Being one of few shops in town that are dedicated to the hot and cold caffeinated beverages that help get us all going on those long days, the market for owner Kris Su and his business is a wide open one.

Getting to know as many people in town allows him to tap into the large market of possible customers, and Su said he owes his success to the valley he serves.

“I have always been really good at marketing and building relationships with people and other businesses, which helps draw in business,” he said.

Those that he cannot initially meet in person, Su explained he utilizes the internet to draw in new clientele that he’s only interacted with on the Internet.

“One of the big things is social media, this town is very big on social media,” he said. “It’s kind of divided, you’ve got 50 percent of the population that uses social media and I managed to reach out to most of them.”

The other half of the demographic, which is mostly the older population who aren’t on social media outlets, Su said he meets via networking with other businesses and just meeting people on the street.

Originally from New York, Su moved to Las Vegas 20 years ago. Owning businesses since he was 25 years old, he took a brief hiatus from the business side of things and became a nightclub promoter.

Wanting to settle down from the party lifestyle that comes with the nightclub industry, Su wanted to migrate to where it was quieter.

“I grabbed my mom and my grandma and my buddy Dan and said, ‘let’s move out to Pahrump,'” Su said.

The idea for the business crossed Su’s mind after noticing the lack of coffee options in town.

“I found the building and I saw the demand to put a coffee shop out here,” he said. “I did a little bit of research and I saw there was really nobody else here besides Starbucks, so there was enough people there to support the business. With my only competition being Starbucks I think that I would have no problem competing with them.”

One thing that sets Java Junkies apart from its competition is that they will drop your drinks off to you.

“Starbucks doesn’t offer delivery, so that’s one thing we have that they don’t offer,” Su said.

In addition to various hot drinks like lattes, espressos, cappuccinos and other warm beverages, Java Junkies also offers a bevy of iced and frozen drinks, which means no matter what the weather is like, they have a drink to suit your needs.

To celebrate their one-year anniversary, Java Junkies is holding a promotion involving other area businesses that entails raffle tickets being given out to various customers when they purchase goods from the partnered establishments.

In turn, those tickets will go into a drawing that will net the grand prize winner free Java Junkies for one year. That will be one free drink every day they are open for one year, which Su estimated to be worth around $2,000.

Su said this helps promote Java Junkies and the other business as he hopes that customers might purchase more items from the participating businesses in order to net more entries into the raffle.

The drawing will take place on Nov. 4 and for the participating businesses, head on over to the Java Junkies Facebook page located at Facebook.com/javajunkiesnv.

Over the course of Java Junkies’ first year in operation, Su said that he learned that being connected with residents is key to doing well in Pahrump.

“It’s about knowing one another because this is a smaller town,” he said. “If one makes an effort you can meet everybody and know everybody. You can garner their support by building a rapport with them and show them that you’re not just about yourself trying to get rich off everybody.”