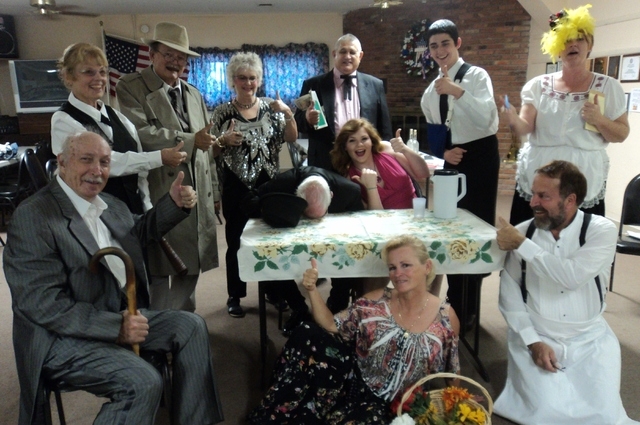 The Shadow Mountain Community Players have been busy this year presenting plays as fundraisers for various charities and organizations and during the annual Wild West Extravaganza. This weekend will begin the staging of SMCP’s final show of the year.

The play is a comedy disguised as a murder mystery. The setting is an Italian restaurant called “The Funky Chicken.” The audience will participate as the restaurant‘s guests.

The scene opens as the staff prepares for the arrival of a very powerful crime boss, Don Vito Cacciatore. Upon his arrival with his latest girlfriend, Ginger Teriyaki, the Don, a very despicable character, manages to insult and intimidate the entire staff. There is also a confrontation with a flower girl, an irritating huckster, who enters the restaurant peddling her wares.

Vito’s wife, Carmella Cacciatore, arrives on the scene and threatens Vito’s life for playing around on her. The Don’s body guard, Pete “The Enforcer” Casserole, steps in and escorts her out of the restaurant. By the end of the first act, the Don keels over dead in his plate of food.

There’s a break in the action while the actors, who all work at the restaurant, serve a full dinner, featuring salad, chicken Alfredo, and dessert to the guests.

After dinner, Lt. Phillip Cogumbo and his Sergeant, Samantha Fritters, arrive on the scene to begin an investigation to determine whether a crime has been committed. The lieutenant asks the names and duties of the staff. Luigi Ala King states that he is the owner. Antonio Kiev is the Maitre’D, Peggy Parmesan the waitress, Larry Le’mon the busboy and Emeril Creole the head chef.

The lieutenant receives a phone call from the crime lab and announces that the Don was poisoned. The questioning becomes more intense. This now includes the Don’s girlfriend and his bodyguard. By the time this phase of the investigation is done everyone is a suspect, including the Don’s wife whom the sergeant found hiding out in the alley.

As the play continues, the staff starts turning on one another by tearing down each other’s alibis and revealing things that didn’t come out during questioning.

Now the audience is invited to question each suspect and vote, by ballot, to determine the killer.

The play ends with the confession of the one who garners the highest number of votes.

SMCP Director Gayle McCaslin said, “This is one of the funniest plays we’ve done this year and the food is going to be a wonderful treat. If you are looking for a light-hearted, fun evening with good food and entertainment, then this is it.”

Advance tickets are available at the Pahrump Community Library at 701 S. East St. or at the door the nights of the performance. For parties of six or more or for information call, (775) 727-6145. New Hope Fellowship is located at 781 West St.